From a ‘dirt patch’ to a futuristic hub with driverless trains: The amazing story of Los Angeles Airport as it celebrates its 90th anniversary, told using fascinating rare vintage pictures

America’s civilian air industry in the 1920s was, to all intents and purposes, non-existent.

When Los Angeles Airport (LAX) opened on October 1, 1928, it was just like all the other U.S airports – a field. LAX historian Ethel Pattison described it as ‘a dirt patch with rabbits running around’, which was a good standard for that time. But how times have changed.

Here we tell LAX’s story as it celebrates its 90th anniversary – past, present and future – using fascinating vintage photographs and renderings of what’s in store for users of the hub in the years to come. 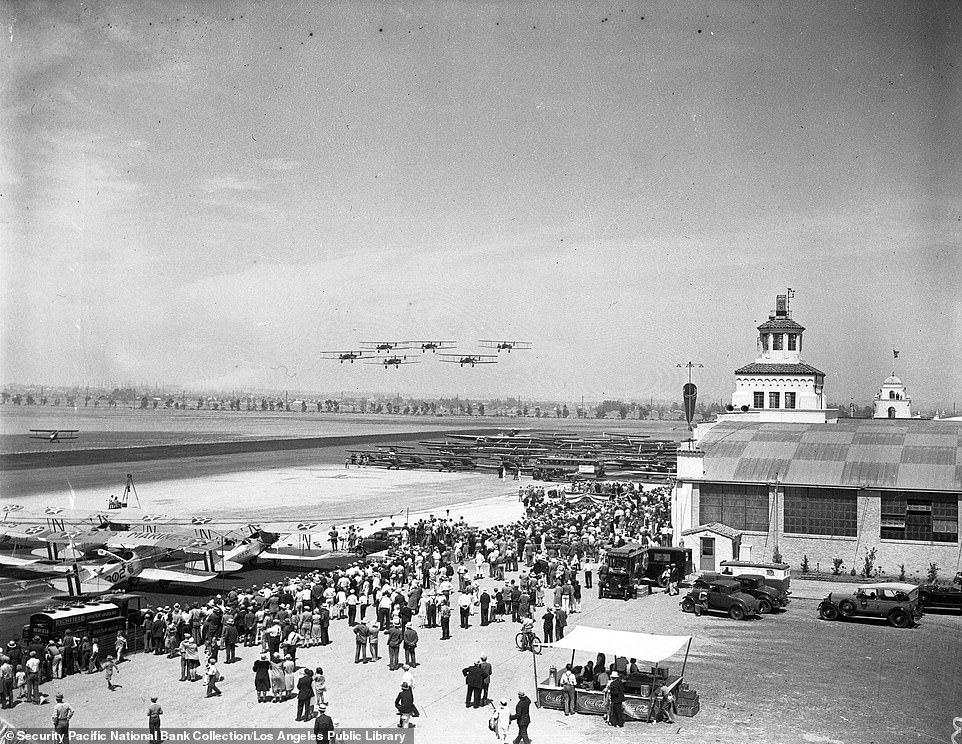 The dedication of Mines Field (L.A. International Airport from 1941) in 1928 saw a large crowd treated to formation flying 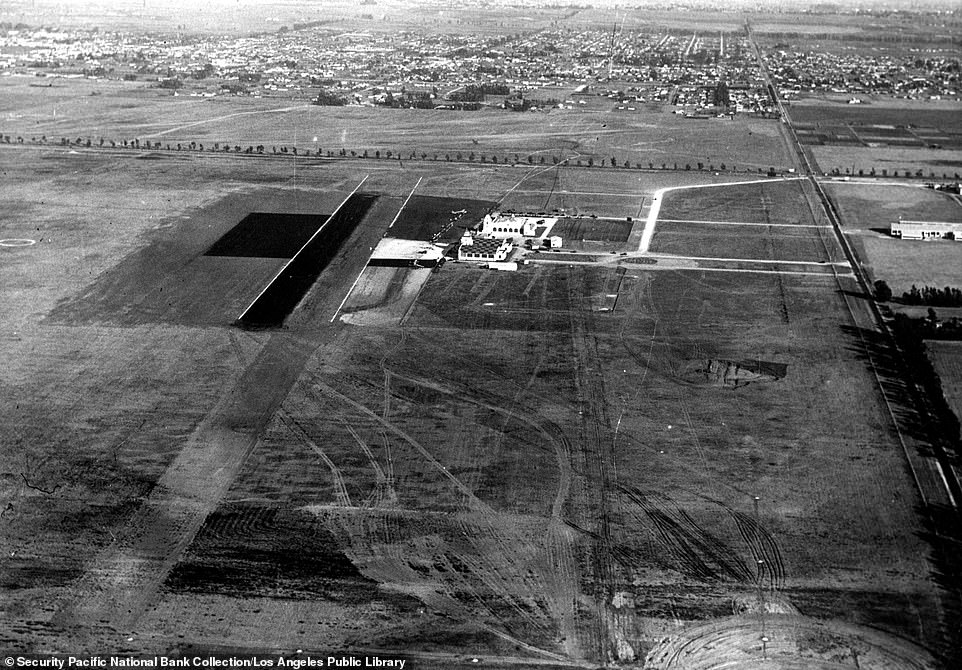 An aerial view of Mines Field and its surroundings in 1930. The airport’s first proper building, Hangar 1, had been opened the year before. The airport had a 2,000ft runway and hangar space for 40 planes

The earliest images show that Ms Pattison’s rabbit patch description was spot on.

Though it was a rabbit patch with a 2,000ft runway and parking for 40 planes.

The oldest image was taken in 1928 – a year after Charles Lindbergh became the first to fly from New York to Paris non-stop, the year Delta ran America’s first ever scheduled air service and a year before the airport’s first proper building, Hangar 1, was erected.

The image shows crowds gathered at the airport, known then as Mines Field, for its dedication as planes buzz overhead. It was still more or less the era of magnificent men in their flying machines.

There was more razzamatazz at the airport in 1936 when it hosted the National Air Races, an event featuring stunt pilots, parachute jumps, airships and the fastest planes of the day going head to head.

The images here of the event show wing-walkers and formation flying, plus lots of dapper hats. 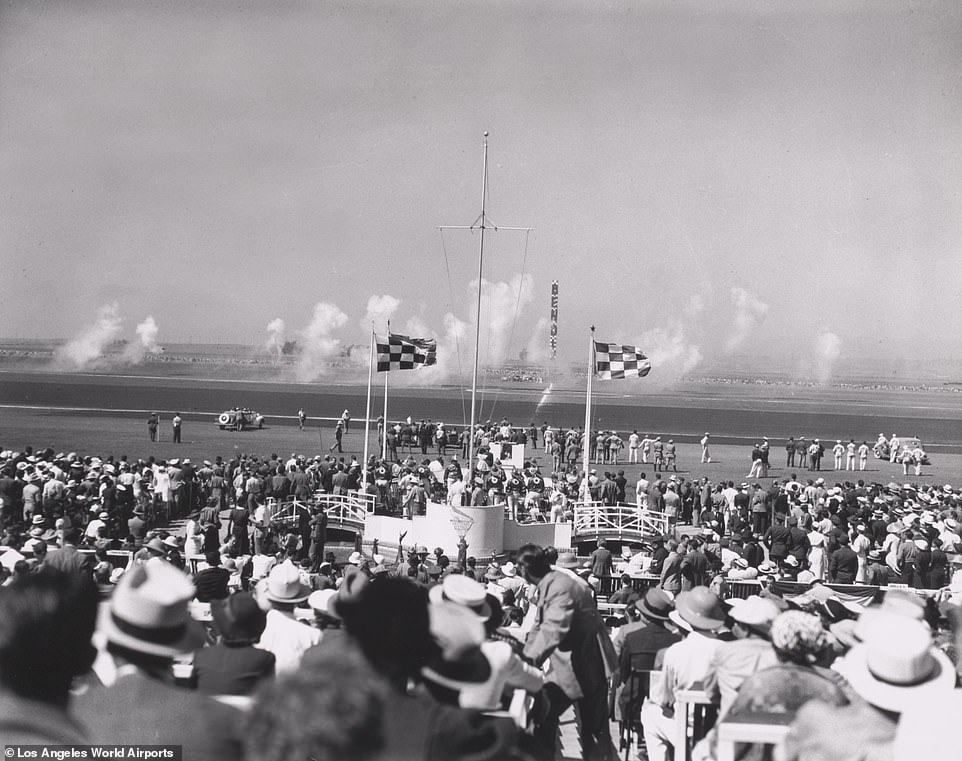 The 1936 National Air Races at Mines Field. The broadcasting of the event took place in the officials stand located in the center of the photograph. In the background is smoke from bombs dropped by military planes displaying wartime maneuvers 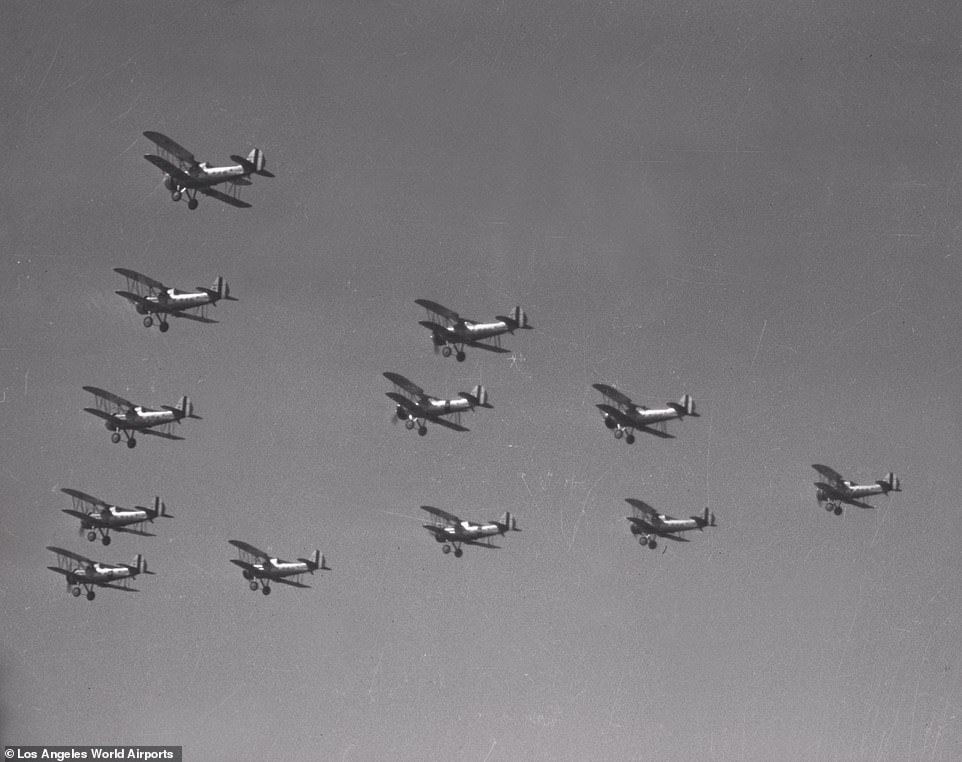 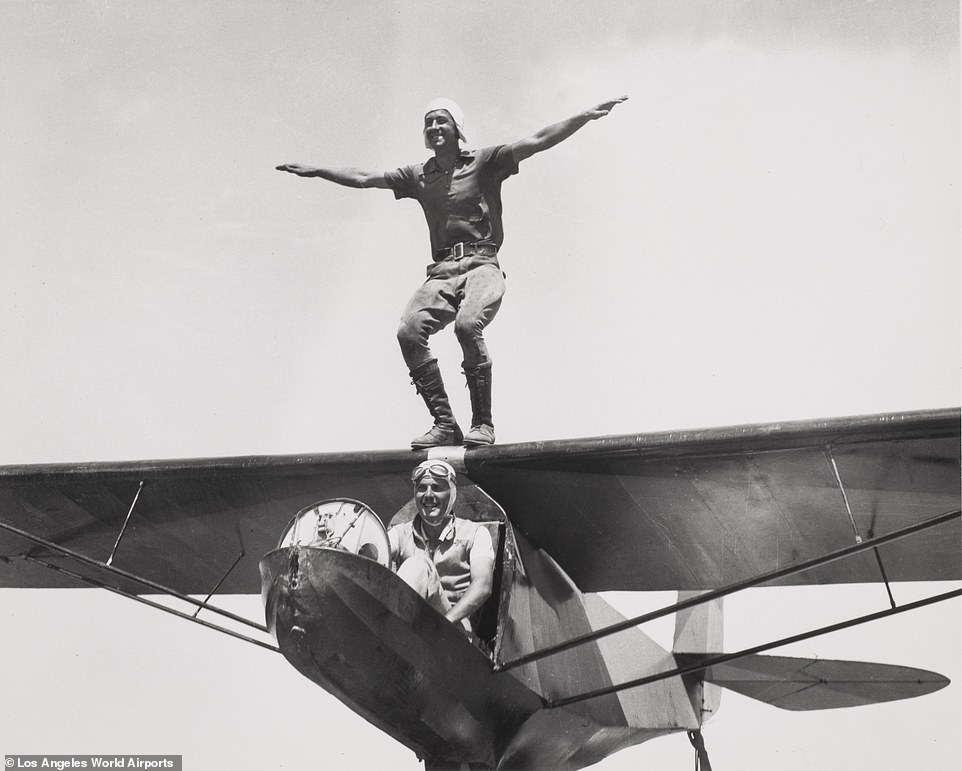 Our series then jumps forward to 1950, with a photograph of an airport barber shop – passengers loved to look good for their flight.

Another photo, taken in 1953, shows how the airport expanded rapidly during this decade. It shows cars and trucks going through the $3,500,000 Sepulveda Boulevard Tunnel on the south side of LAX in a final testing prior to opening.

By this time the airport had become a scheduled airline terminal and renamed Los Angeles Airport – it was Mines Field until 1941 – but catching a plane at it would have been worlds apart from the modern-day experience. 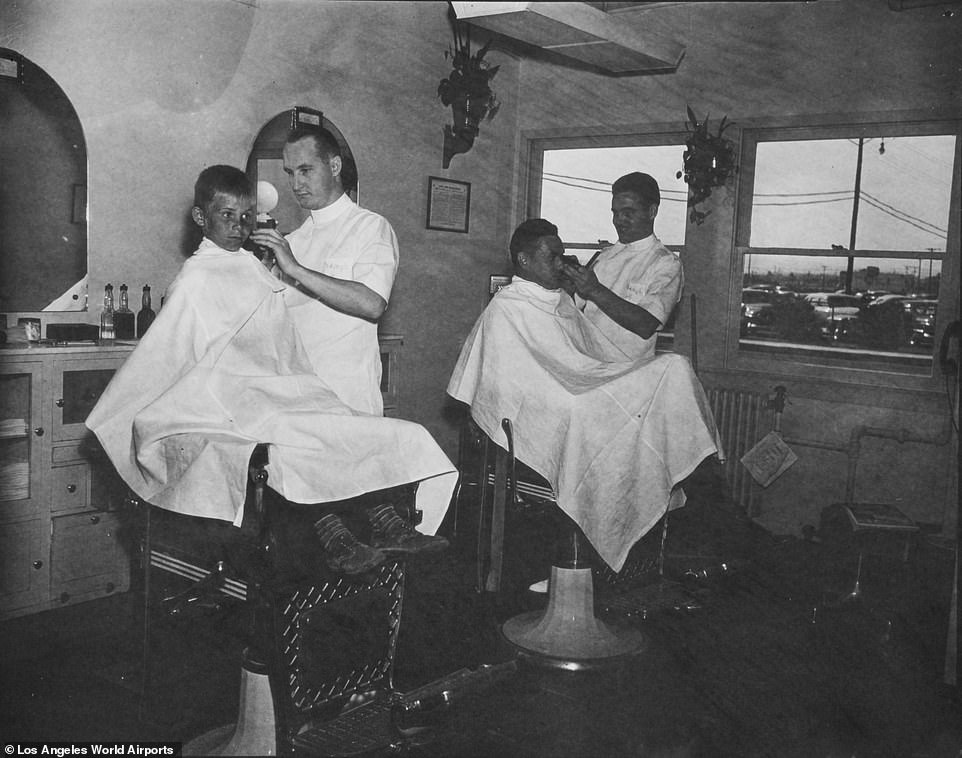 As people would want to look smart before boarding their flight, a barber shop was set up in the airport so they could have a trim before jetting off. This picture was taken in 1950 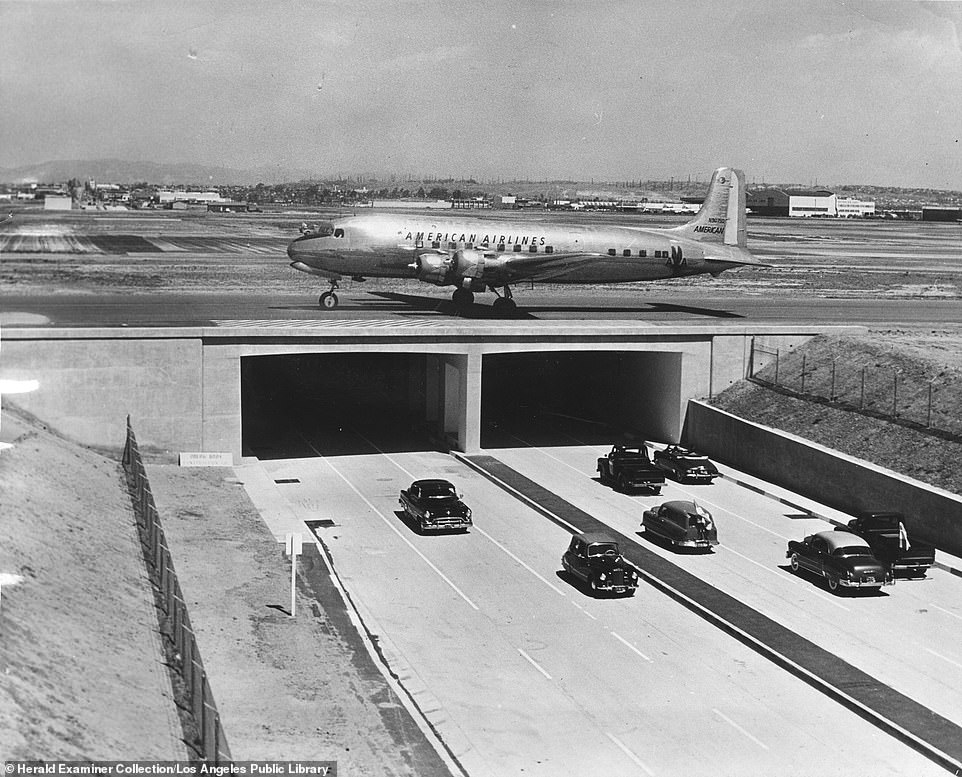 Cars and trucks go through the $3,500,000 Sepulveda Boulevard Tunnel on the south side of LAX in a final testing prior to it opening. This picture was taken in 1953 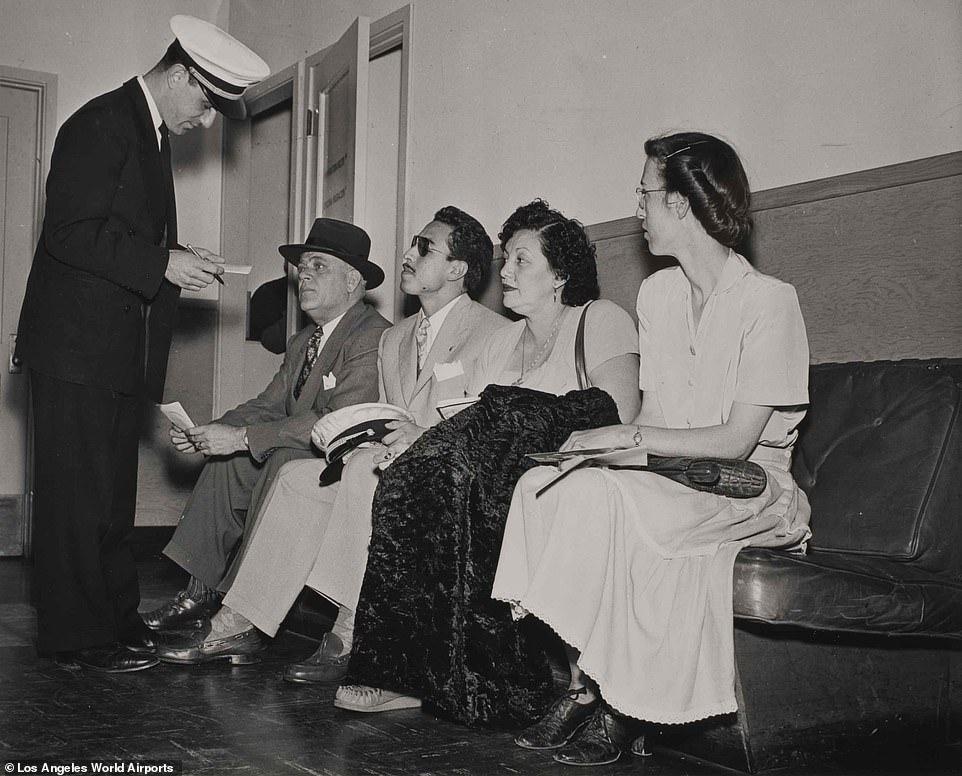 International passengers who arrived at LAX had to line up and have their documents checked in the Customs Building. This picture was taken in 1959 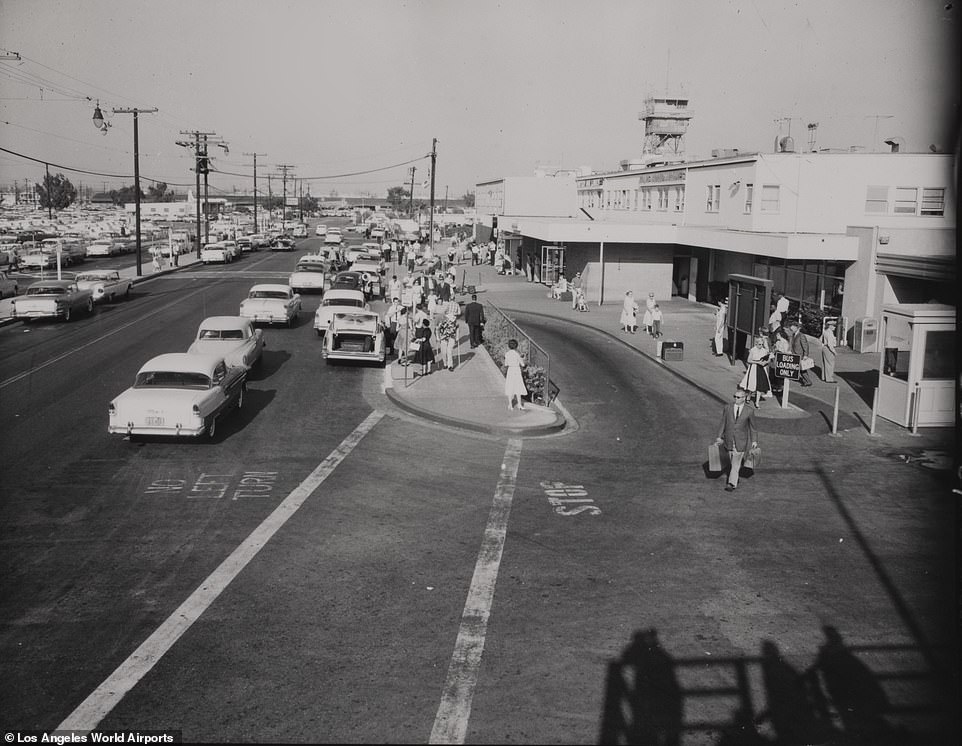 Nearly all passengers arrived at the airport by car and as air travel became more popular, huge lines would form at the drop off and pick up areas. This picture was taken in 1959

In general it wasn’t taken seriously until the late 1950s, when bag searches began to be implemented. X-Ray machines and metal detectors weren’t required by law at U.S airports until 1974.

In the early days at LAX passengers would have simply walked straight through the terminal and boarded their planes on the tarmac, their luggage having been loaded into the hold by a baggage handler.

Some of the images here were taken in the 1960s and show passengers navigating an airport that had grown enormously.

The main terminal complex was built in 1961 and that heralded an age of duty free shops, moving walkways and escalators. 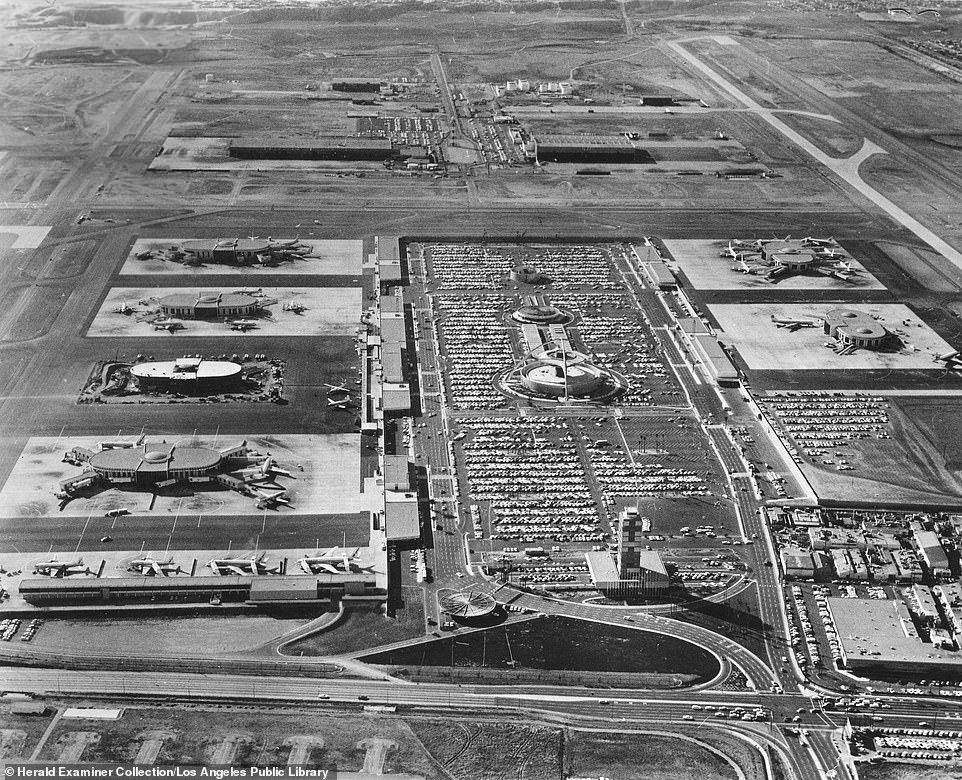 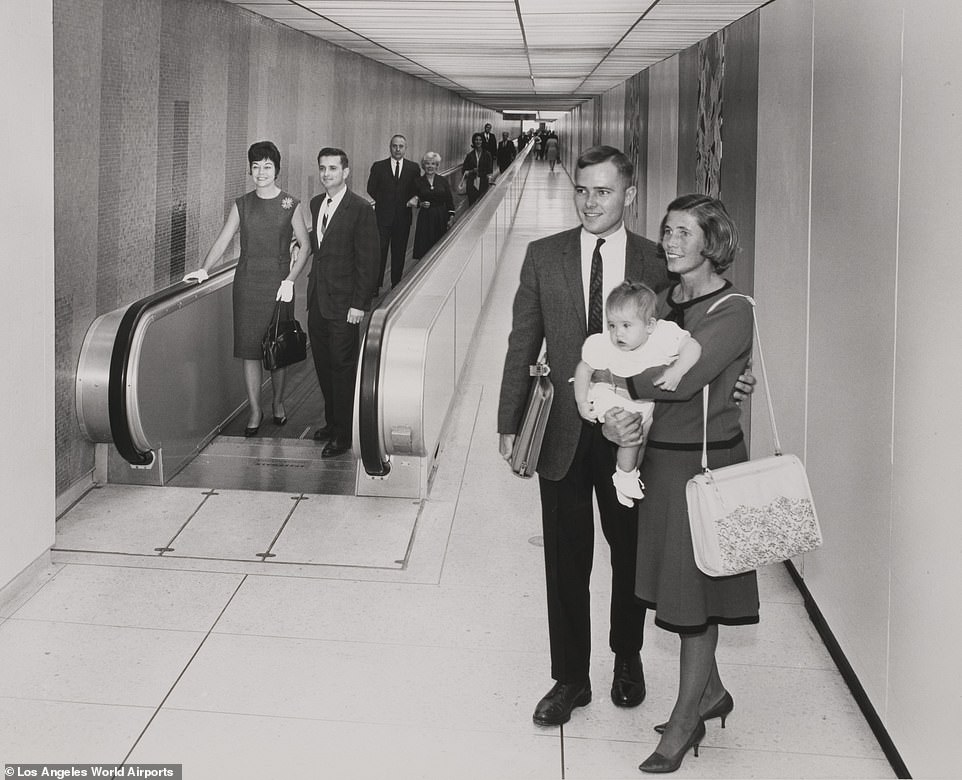 The 420ft moving sidewalk in the American Airlines terminal in October 1964. It provided an efficient way for passengers to get from the ticket desk to the satellite buildings 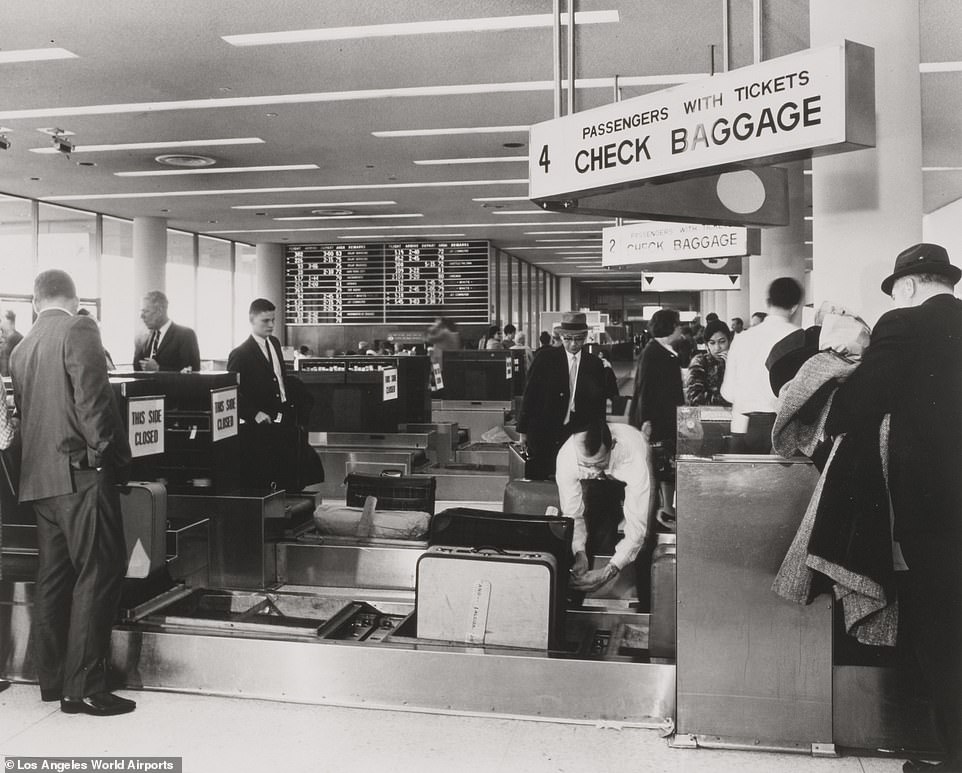 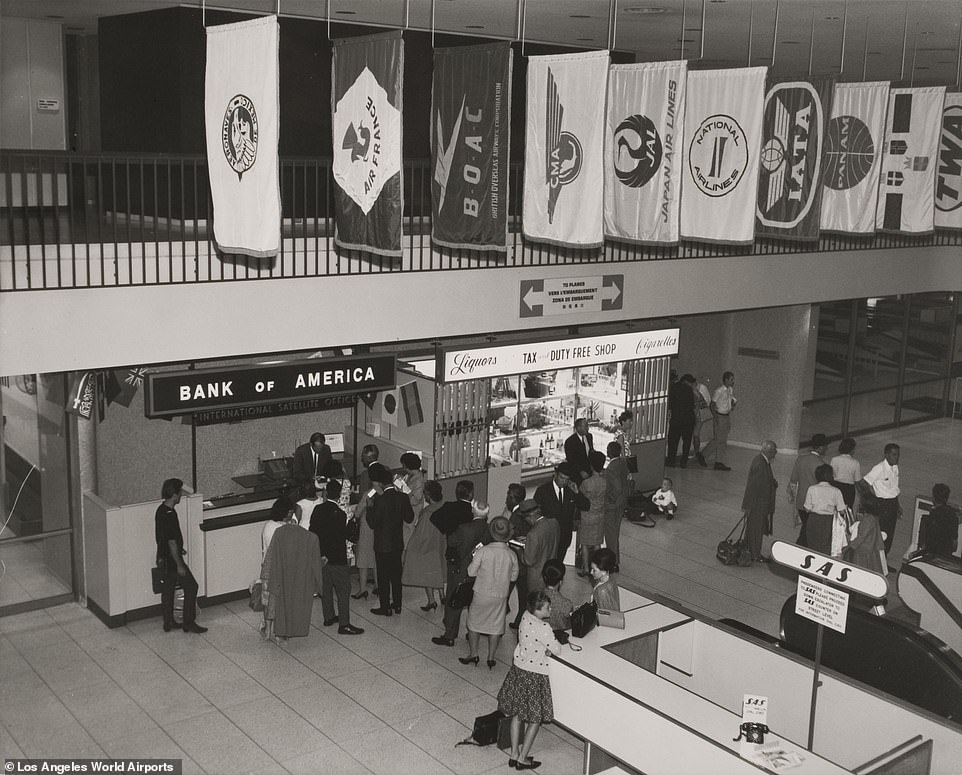 Passengers line up to exchange their money at a Bank of America branch inside a satellite terminal at LAX in 1968, where foreign carriers were based 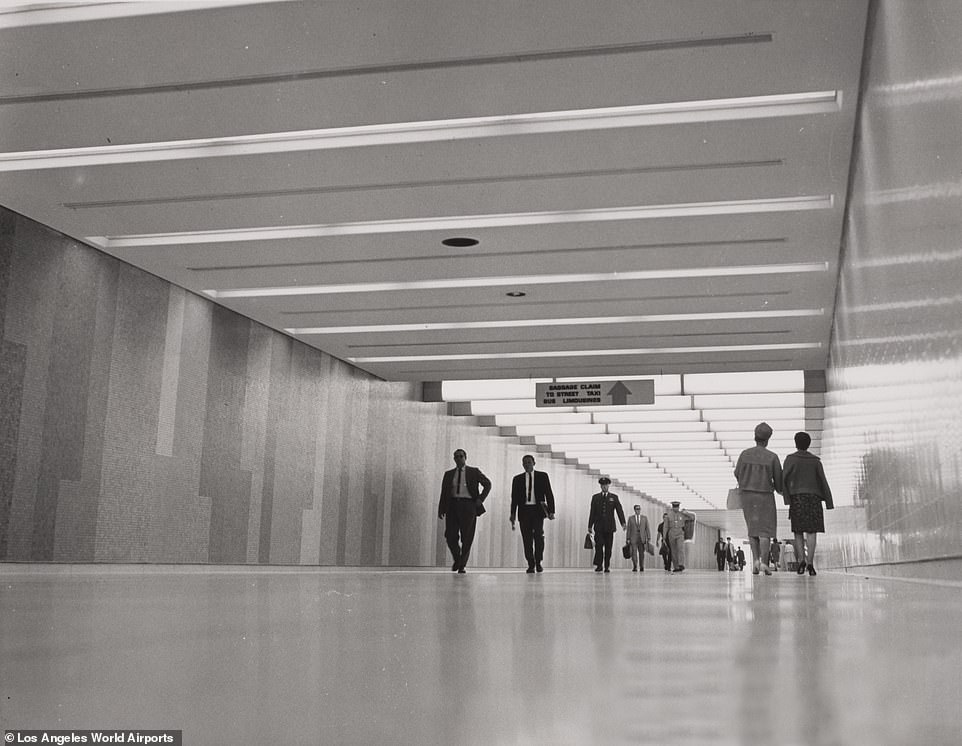 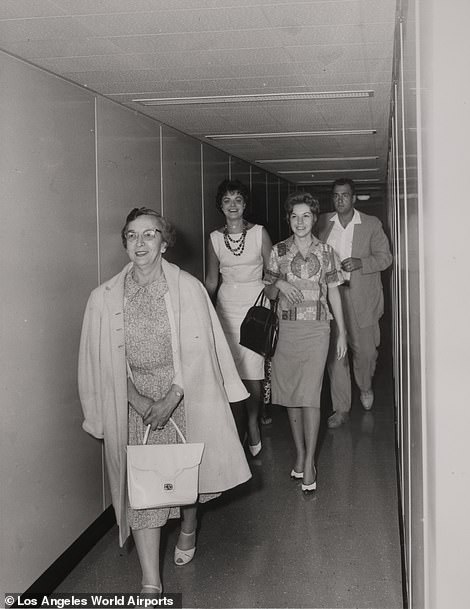 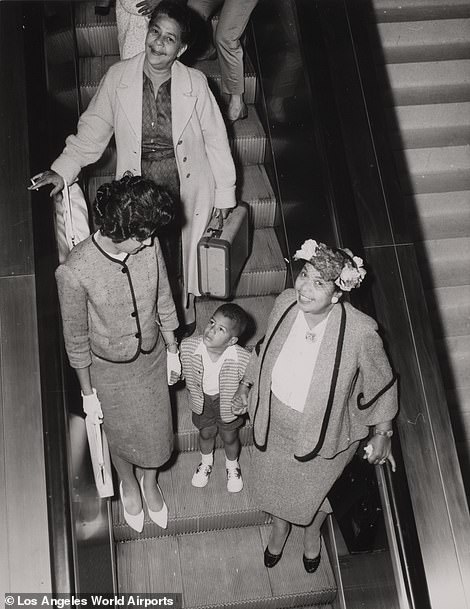 Passengers make their way to the baggage carousel after arriving on the first United Airlines flight to land at LAX in 1961 (left). Travellers would dress in their finest clothes to fly. The image on the right was also taken in 1961 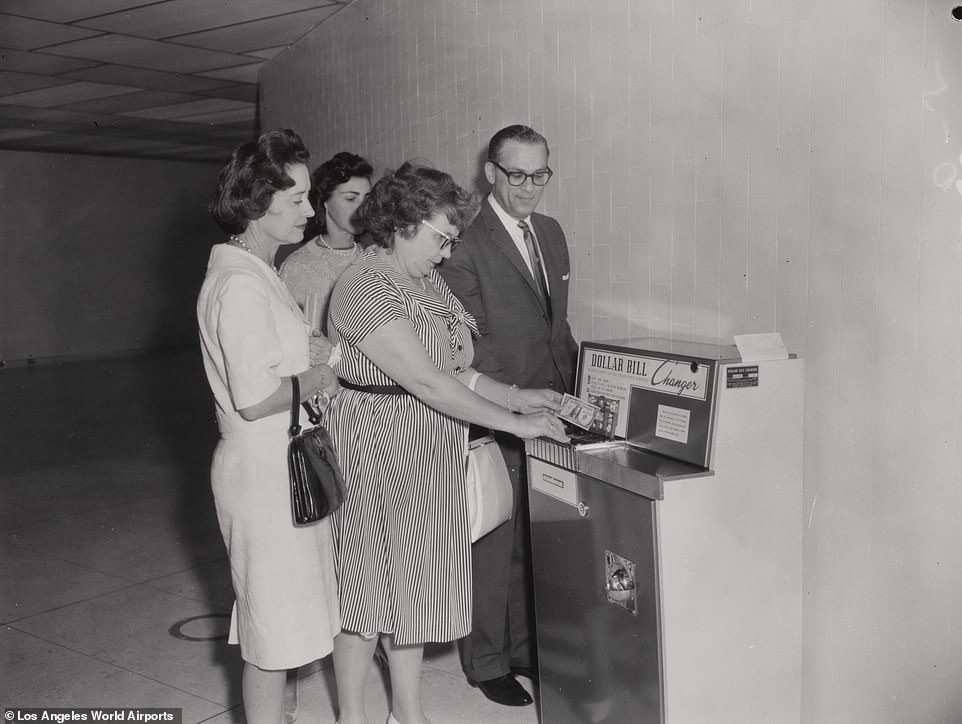 Inside the passenger transit area of the international satellite terminal at LAX in 1962. Several fliers gather around a change machine 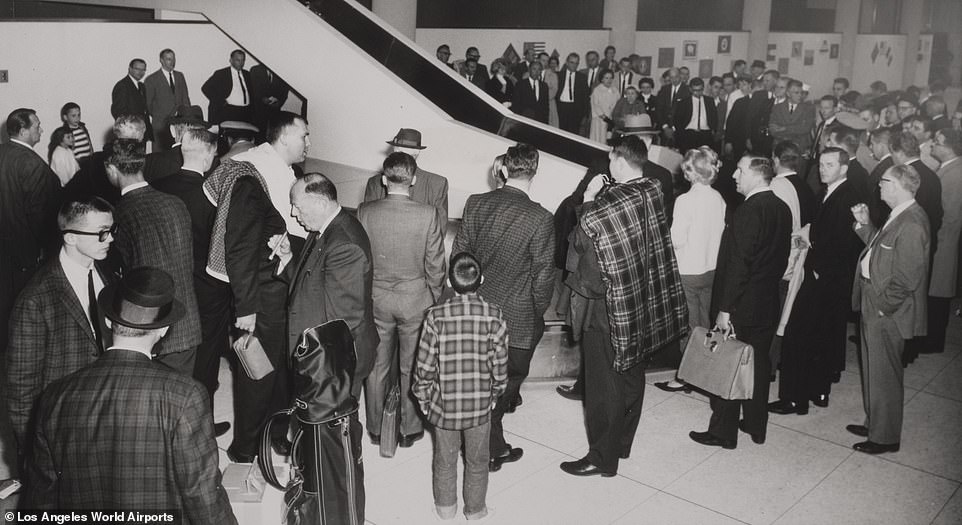 In general airport security wasn’t taken seriously until the late 1950s, when bag searches began to be implemented. X-Ray machines and metal detectors weren’t required by law at U.S airports until 1974. This image was taken in 1963 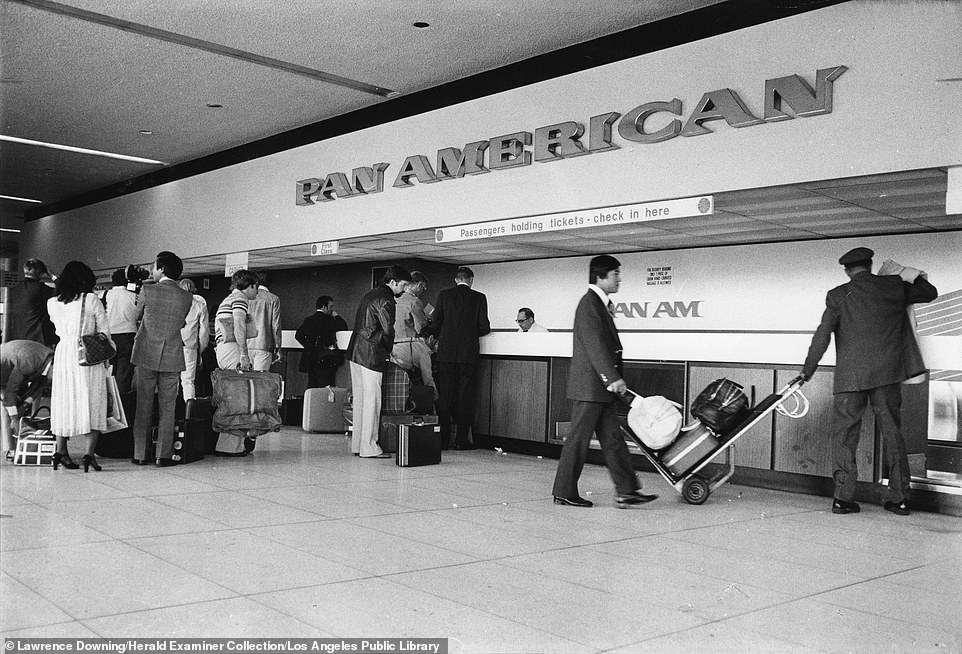 A Pan Am ticket counter at LAX. This photograph was taken on March 28, 1977

But in common with users of the airport from previous decades, passengers still regarded air travel as a luxury, and dressed for the occasion.

These images show men and women moving through the airport in their Sunday finest.

How times have changed. 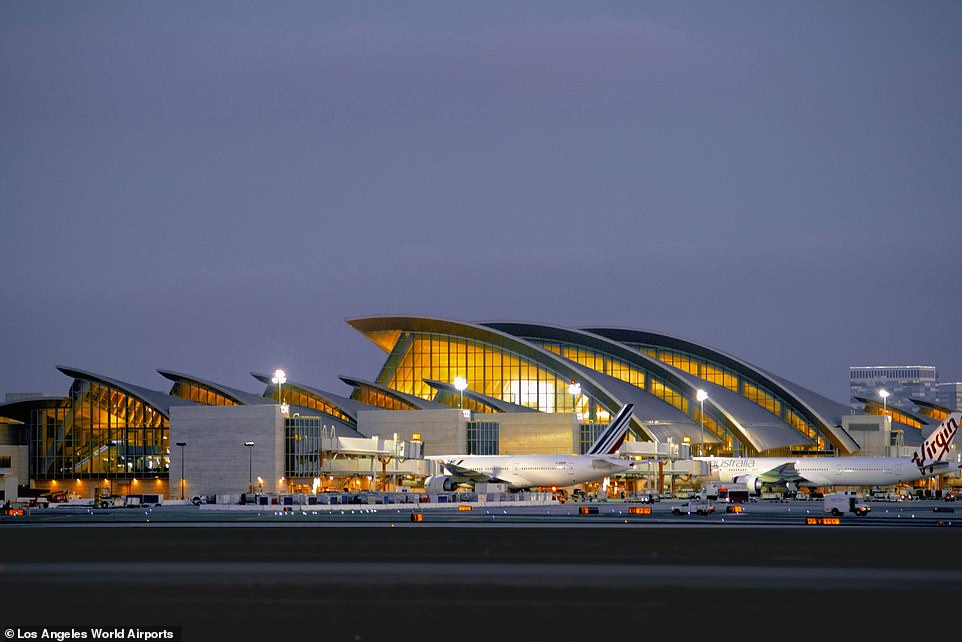 The flying experience today is vastly different from yesteryear. LAX now has nine terminals including the Tom Bradley International Terminal 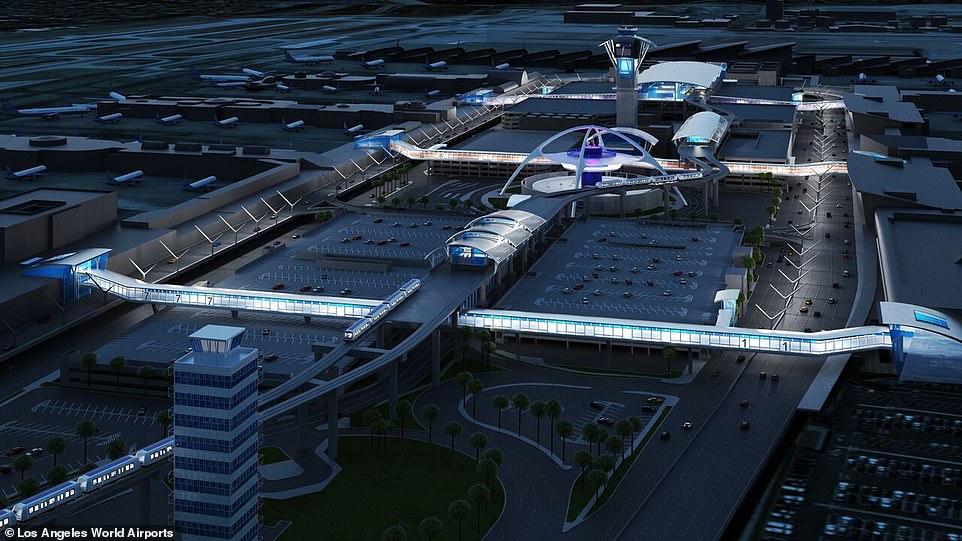 The airport is set to totally transform thanks to a $14billion renovation program. This Image shows what the CTA (Central Terminal Area) when it’s finished in 2023 will look like when illuminated at night time 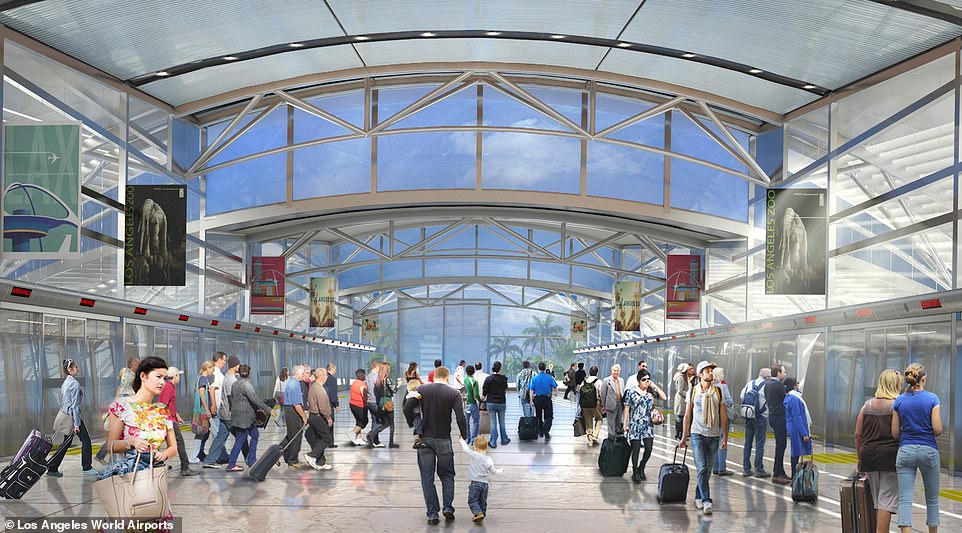 Present day LAX has nine terminals – including a Private Suite terminal for VIPs with chauffeur-driven BMWs that take passengers across the tarmac to their aircraft – over 62 dining and shopping venues, an observation deck with 360-degree views and ‘therapy dogs’ that offer emotional happiness and support to nervous fliers.

The airport is, however, set to totally transform once again, thanks to a $14billion renovation program.

In the near future passengers can look forward to a new $1.6billion concourse in the Tom Bradley International Terminal, which will add 12 new aircraft gates and children’s play areas, a driverless electric train – the ‘automated people mover’ – that will ease access between the Central Terminal Area from nearby parking areas and facial recognition check-ins rolled out by more airlines (BA and Lufthansa have already introduced it).

It’s an airport that’s definitely on the up-tiddly-up-up. 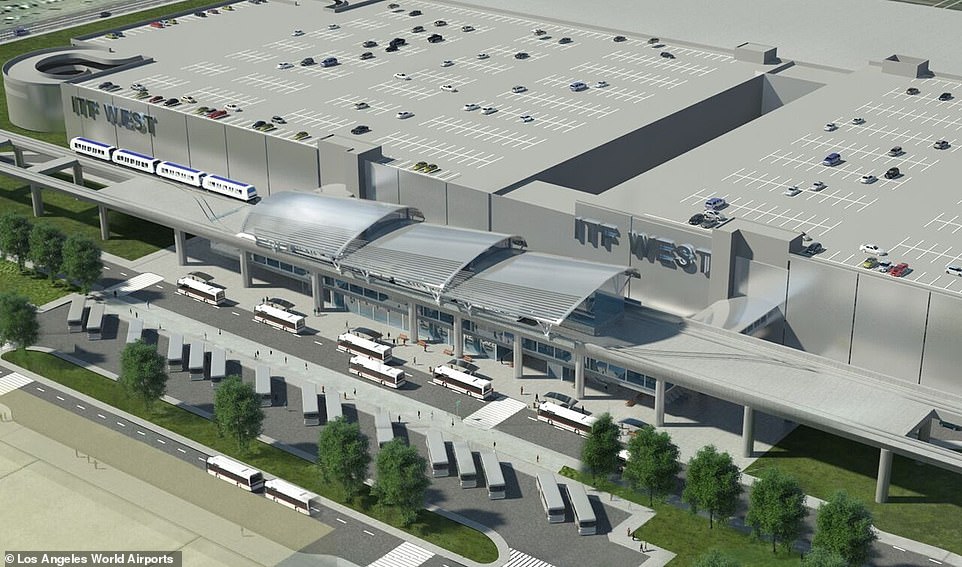 This rendering shows the APM in transit. The system’s fleet will consist of 44 cars that are fully electric powered, 98 per cent recyclable, and generate a portion of their own power through regenerative breaking. The building in this rendering is the Intermodal Transportation Facility (ITF) – West, which will provide a connected and convenient location outside of the terminals, where passengers, well-wishers and airport employees can either be dropped off, picked up, or park and then ride the APM into the airport. It will open in 2020