Bridget O'Toole is adamant her husband Dermot would be alive today had a dangerous parolee been supervised properly and his breaches been dealt with correctly.

When Gavin Perry failed to meet his parole officer on July 9, 2013, the supervision appointment was rescheduled for a week later, not two days as required by Corrections Victoria.

The meeting never happened and Perry instead crashed into the O'Tooles' orbit. 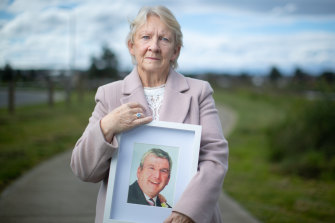 Bridget O’Toole is suing Corrections Victoria over their failure to monitor Gavin Perry, the man who murdered her husband, Dermot, while on parole. Credit:Simon Schluter

On July 12, 2013, while high on ice, Perry entered the couple's Hastings jewellery shop with a knife and repeatedly stabbed Ms O'Toole. Dermot O'Toole went to protect his wife of 41 years but was stabbed and killed.

Ms O'Toole wishes she could switch her brain off from that horror, but believes had corrections staff followed their own rules, the course of events would have been altered and Dermot O'Toole's murder would not have happened.

"Had he [Perry] been re-scheduled [to two days later] Dermot would be alive today. One hundred per cent, absolutely," she said. 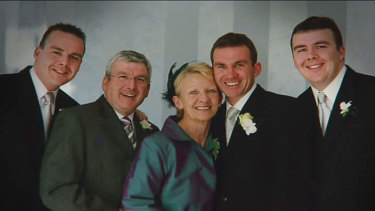 Dermot O’Toole, second from left, with his wife Bridget and sons Dale, Christian and Trent.

Ms O'Toole is suing the state of Victoria for unspecified damages for pain and suffering over her husband's death. In a statement of claim with the County Court, her lawyers say Corrections Victoria was negligent and breached its duty of care while Perry was on parole.

While in jail for armed robberies, Perry was at the start of 2013 found to be at high risk of violent reoffending given he had convictions dating back to his childhood and a history of drug use. But five weeks later he was granted parole.

While on parole he missed a supervision meeting in June, failed to inform of a change of address and relapsed into drug use. In the week before the murder, he missed another appointment and carried out two other hold-ups.

In 2017, then state coroner Sara Hinchey found Perry was not drug tested while on parole, and that he played the system by concealing his relapse from case workers.

The inquest heard that under changes since Mr O'Toole's death and the murders of Jill Meagher and Sarah Cafferkey – who were also murdered by former prisoners – people like Perry would need to do more to prove they were ready for parole, and if released they would be managed by experienced parole officers who had reduced caseloads.

In the statement of claim, Ms O'Toole's lawyers say Perry's case workers should have inspected his accommodation, applied greater rigour to investigating his drug use and pushed for him to undergo testing. The breaches meant his parole should have been cancelled.

Shine Lawyers senior associate Cameron Tout said: "There are people who should be held accountable for how they conducted themselves and who had a responsibility for people like Bridget and Dermot and the rest of the community."

Ms O'Toole told The Age she and her family were horrified at learning of Perry's past. He was, she says, "a time bomb waiting to go off" without scrutiny.

She believes the state's handling of the case shows it "doesn't give two hoots about victims".

"I don't believe they will ever apologise. I just want them to be accountable," she said.

"They caused this by their inaction … Those parole breaches in five months and nothing was done about it. Nobody checked up on it. I think that's disgraceful."

The O'Tooles moved from Ireland to Australia in 1972, raised three sons and ran a successful jewellery business. Mr O'Toole was a kind, generous man with an "amazing sense of humour" whose dream for retirement with his wife was to drive a caravan around Australia.

"I live it day and night, it never leaves you, it just haunts you," she said.

Perry, 26 at the time, pleaded guilty to murder and was jailed for 27 years.

Corrections Victoria is yet to file a response to Ms O'Toole's statement of claim. The organisation said it did not comment on matters before the courts.