Through his 20s and 30s, Arron Wood seemed destined for a future in politics. 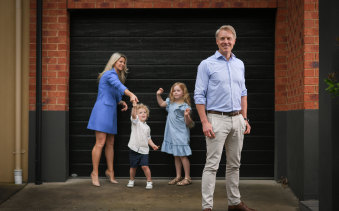 Arron Wood, at home with his wife Stephanie and their children Sam and Addison.Credit:Eddie Jim

"And I certainly hope that when he makes that decision, he makes the decision to run for the National Party," Bishop said.

Now 44, Wood rattles off the political parties he's been approached or sounded out by: the Nationals, Democrats, Greens, Liberals and Labor.

"They can't work out quite where I fit [politically]," he laughs.

For now at least, Wood's political ambitions are centred on Melbourne Town Hall. The City of Melbourne's deputy lord mayor is making an all-or-nothing pitch for the top job with digital marketing businesswoman Lisa Teh, and is considered lord mayor Sally Capp's closest rival in this month's election.

Wood entered Melbourne's city council in 2012, a 36-year-old political novice and No.2 on former lord mayor Robert Doyle's councillor ticket. Wood may not have expected to win, but so strong was Doyle's brand, three councillors on his ticket were comfortably elected.

Before the 2016 election, Doyle approached Wood to run as his deputy. This time, Doyle and Wood attracted a whopping 44.6 per cent of the primary vote, and secured a comfortable majority on council.

But in December the following year, Doyle's leadership came undone. He was accused of sexually harassing three women – two independent investigations upheld their complaints, although a police investigation was later dropped – and Doyle stepped down in disgrace.

When the story first broke, Wood and his wife Stephanie were taking their first holiday in more than a year.

As acting lord mayor, Wood would lead Town Hall through a tumultuous period.

Days after he took the reins, Saeed Noori ploughed a car into pedestrians on the corner of Flinders Street and Elizabeth Street, killing one man and injuring 16 people. 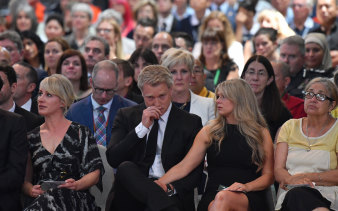 The next month the city was deep in grief as it marked the one-year anniversary of the Bourke Street attack, which left six people dead and dozens more injured.

For six months, Wood was the public face of Town Hall, and working behind the scenes to hold his colleagues together.

"Which is why sometimes I get a bit upset when I hear things about, you know, Town Hall being fixed by kind of new leadership," he says. "What happened was that myself and all councillors – this was a real team effort – came together."

The new leadership he's referring to is Capp, with whom Wood has had a strained working relationship.

Capp was elected in a byelection in 2018, and came to office promising to be safe, steady and a healer. Some Town Hall observers say her task was made more difficult because she came in as an outsider, to a council group with established alliances.

Doyle's legacy still hangs over Town Hall. One councillor who had been on the former mayor's team, Labor member Nicholas Reece, is running this time as Capp's deputy lord mayoral candidate. Another, current councillor Beverley Pinder, is running on Wood's councillor ticket, and has stumped up $30,000 to the cause. Doyle's former chief of staff Amelia Bitsis and senior advisor Chanelle Pearson have set up their own media and government strategy firm, Squad Consulting, which has so far provided $5000 worth of help to Wood's campaign.

But Wood is setting his own policy agenda this election.

His policies so far include a 20 per cent discount on rates for commercial ratepayers; creating a City of Melbourne disability access fund to cater for the 20 per cent of city users who live with a disability; making Melbourne a start-up hub; providing free on-street parking until the end of summer, and allocating $1 million to extend the Melbourne Renewable Energy Project to reduce ratepayers’ energy costs.

Wood says he wants to return the emphasis to city issues.

"I want to bring in a much greater focus back on the small things that matter, the kind of mechanics of the city," he says. "It might not necessarily be big and shiny and sort of big announceables, but I just feel in the last two and a half years, there's been a move towards those big sort of grandiose visions that have that really consumed the organisation."

By September 28 he had amassed almost $140,000 in donations and in-kind support, according to a voluntary donations register (Capp has refused to disclose the donations to her campaign until after the election). One of his supporters ruefully notes that if Wood wasn't so opposed to accepting donations from property or gaming interests, the tally would be much higher.

In a fortnight, voters will decide whether it will be enough.

Our weekly newsletter will deliver expert analysis of the race to the White House from our US correspondent Matthew Knott. Sign up for The Sydney Morning Herald‘s newsletter here, The Age‘s here, Brisbane Times‘ here and WAtoday‘s here.