What can you make out of The Times? Catapults, roller coasters and piñatas for starters, thanks to the At Home team. 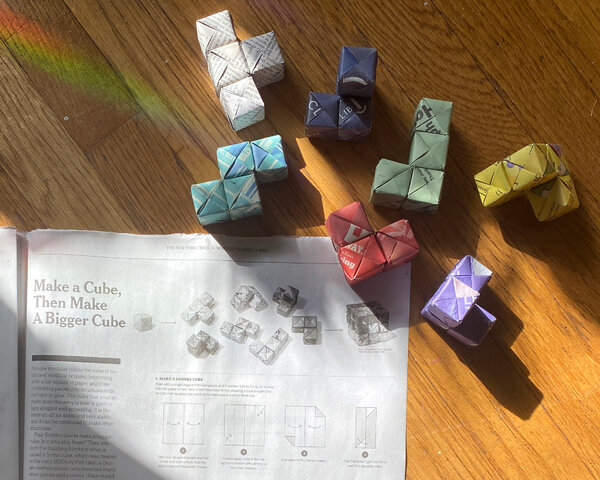 One day in April, working from home like millions of others, Amy Virshup, The New York Times Travel editor and leader of the At Home team, joined the art director Andrew Sondern and the writer Adriana Balsamo for a needed video conference. Their agenda: fold a double sheet of The Times into a hat.

Creasing paper and tearing tape for a story is “not something I imagined in my career I would be doing,” Ms. Virshup joked.

Imagination is exactly what fuels her team every week for an At Home feature known by its editors and designers simply as “the activity,” a craft, game or other project in which readers learn how to turn the physical newspaper into a unique D.I.Y. creation.

This week, it’s a game involving airport codes. Previous activities included a doll, a roller coaster for a ball and a coronavirus piñata. There was even something called a Flibber (more on that later).

So far, At Home has produced some two dozen of these activities. The breadth is a testament to the team’s creativity — and the most challenging part of the weekly installments, said Christy Harmon, the section’s photo editor (and an avid at-home crafter), who has taken the lead on the project.

“There’s not one straight path,” she said. “We try to mix it up so it’s fresh every week.”

The feature began in the spring, when The Times introduced the At Home section to help readers cope with sheltering in place. Mr. Sondern and another art director, Mary Jane Callister, proposed the activity as a way that readers could interact with the newspaper and pass the time. Before long, staff members were comparing notes on folding their Sunday section into headwear. 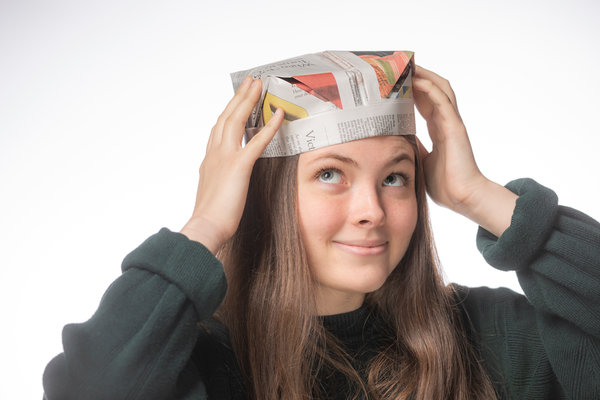 “One of the things we try to do in the section is offer people a whole panoply of things,” Ms. Virshup said. “Some of them are very serious; we talk a lot about social/emotional health, about how to deal with the pandemic. But we also want to offer people some fun, some levity and joy, and I think that the activity does that really well.”

The team pulls from a variety of sources for its ideas. The Times’s Games team regularly contributes, as does the Brooklyn-based craft blogger Jodi Levine, who spent nearly two decades working in the craft department at Martha Stewart Living — “a really wonderful score for us,” Ms. Harmon said. Suggestions also come from readers; the nonprofit MathHappens kicked in a way to transform origami cubes into a complex mathematical puzzle, and Dazzling Discoveries, a STEM education center, reached out about how to build a catapult.

Other desks at The Times have focused on the process of creating, of course. T Magazine’s recent “Make T Something” video series enlisted artists and designers to upcycle the newspaper into objects like a handbag or a sculpture in under an hour. At Home’s take is accessibility — no experience necessary.

Simplicity is a must. Boiling an activity down to the allotted black-and-white half page of news print is no small task, so after a writer has broken down the steps and an illustrator or photographer has represented them visually, it’s time to put the editorial and design elements to the test.

To ensure the directions are clear enough, team members often tap their children or colleagues to try them out. “We are our own full-service department,” Ms. Harmon said.

After publication, the staff will often get feedback on a certain project, sometimes in the form of pictures of paper-folding adults. Which brings us to the Flibber. Ms. Virshup was alerted to the whimsical object — a cross between a drum major’s baton, a pompom and a palm tree — by a reader who recommended a 1964 children’s book called “How to Make Flibbers, Etc.: A Book of Things to Make and Do” by the author and illustrator Robert Lopshire.

Ms. Virshup mentioned the idea to her team, who found the Flibber’s flappy frivolity too good to pass up. The very week that staff members were preparing the activity, another reader wrote to recommend it. “It was wild,” Ms. Harmon said. “What are the odds?”

Now, Ms. Harmon and other At Home editors frequently get emailed pictures of Flibber-wielding children. “Seeing people actually make the projects and send them in is so fun,” Ms. Harmon said. “It’s nice to see the full circle of what you’re producing.”