For several years, a small nonprofit operating out of a church on the South Side of Chicago has tried to reduce gang violence by getting kids involved in boxing, music and other programs.

Few outside the city had ever heard of the group, Crushers Club, until this week, when it was awarded a $200,000 grant from a new partnership between the N.F.L. and Jay-Z that grew out of the league’s recent history of racial strain.

But by Friday, the group and its founder, Sally Hazelgrove, had themselves become a symbol of racial tension. The issue, mostly, was about dreadlocks.

In 2016, Ms. Hazelgrove posted photos on Crushers Club’s Twitter page in which she is holding scissors to cut the dreadlocks off a teenager named Kobe.

“Another Crusher let me cut his dreads off!” Ms. Hazelgrove, who is white, wrote in the tweet, posted on Oct. 25, 2016. “It’s symbolic of change and their desire for a better life!”

In an earlier post, that September, she used the hashtag #loveshorthair.

Black people have long been ostracized and punished for hairstyles consistent with their natural hair texture like dreadlocks, and the tweets were widely read as perpetuating that stigma. The acclaimed director Ava DuVernay pinned a message to the top of her Twitter feed with images of magazine covers showing her own “locs,” and hers and other posts decrying the cutting were retweeted on Friday many thousands of times.

The N.F.L. and Jay-Z’s music and entertainment company, Roc Nation, whose partnership has been viewed with equal amounts of praise and skepticism, also were criticized for the donation Ms. Hazelgrove’s group received.

“Why is the NFL + Roc Nation doubling down to fund the cutting off of locs to conform to white expectations?" wrote Resist Programming, the Twitter account that dug up the Crushers Club tweets.

Neither the N.F.L. nor Roc Nation responded to requests for comment on Friday, but there was no indication that they intended to withdraw the donation. Ms. Hazelgrove deleted those and other tweets she had been criticized for, but said in an interview on Friday that she was being unfairly maligned.

Ms. Hazelgrove, 56, started the club in 2013; it operates in the Englewood neighborhood, one of Chicago’s most impoverished areas and where the homicide rate is among the worst in the country. She said the club had no policies prohibiting dreadlocks or any hairstyle, or any style of clothing. She said that Kobe had asked her to cut off his dreadlocks, and that of the 500 or so young people who have come through Crushers Club, only one other had done so.

She said that Kobe’s decision to cut his hair was more about “changing his image, rebranding himself,” and that the tweets were sent “in the spur of the moment,” without forethought.

“I understand that my social posts could be misconstrued and could have been insensitive,” Ms. Hazelgrove, who noted that her children are biracial, said. “I certainly never meant to ever have any type of disrespect for dreads, for the spiritual power they hold.”

“For anyone to insinuate that I’m racist is hurtful and just ludicrous,” she added. “I work to make a difference in the lives of these children, and I’ve been working out here for 20 years.”

“Cut my hair like three years ago, that was something I wanted to do,” Kobe said in the video. “I was tired of it, tired of gangbanging, tired of messing up. Now I’m a changed young man.”

The haircutting tweets were not the only ones from 2016 that Ms. Hazelgrove’s critics seized on. In another, following the killing of five Dallas police officers, she used the phrase “All Lives Matter,” a sort of counterslogan to “Black Lives Matter” that has often carried the connotation of ignoring the specific grievances of black Americans.

She also praised local police officers who participated in Crushers Club programs. In 2018, Christopher Wray, the director of the F.B.I., presented her with the “Director’s Community Leadership Award,” the highest recognition the F.B.I. awards a civilian. 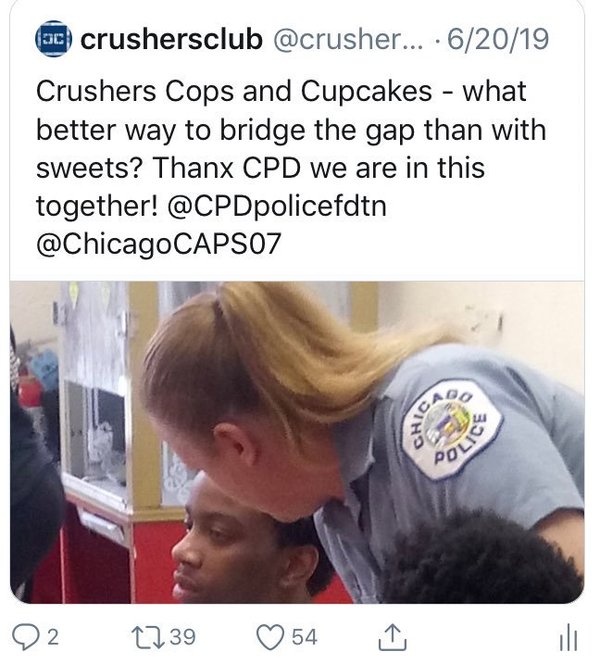 It is common for neighborhood organizations to foster relationships between youth and the police, but the strained relationship between black communities and law enforcement in Chicago led many on Twitter to view the tweets with suspicion.

In yet another tweet, Ms. Hazelgrove asked for a curfew to help with the city’s gun violence epidemic, and wrote, “We need Trump to help us.”

That was interpreted by some people, including Ms. DuVernay, who directed the 2014 film “Selma” and the Netflix mini-series “When They See Us” about the Central Park Five, as support for President Trump.

Ms. DuVernay did not respond to a request for comment on Friday.

On Friday, when Ms. Hazelgrove was asked if she would call herself a Trump supporter, she said, “No.” She said that she has tweeted at politicians and leaders “in the spirit of desperation” for years — including President Barack Obama when he was in the White House and Rahm Emanuel, Chicago’s former mayor.

When Mr. Trump became president, she said, she tweeted at him too, as well as liking “conservative people’s posts to get his attention.”

“I was desperate,” she said, adding that no one has ever responded.

The outcry over Ms. Hazelgrove’s posts followed a lukewarm reception for Inspire Change, the music and social justice campaign created by the N.F.L. and Roc Nation. It represents a push to quiet the long-running controversy over the handling of players kneeling or sitting during the national anthem — most notably Colin Kaepernick, the former San Francisco 49ers quarterback who has been unable to find another team to play for. (He settled a lawsuit in which he alleged that the league had colluded against him.)

Jay-Z has been one of Mr. Kaepernick’s most public supporters in his struggle to return to the league. But shortly after the N.F.L. commissioner Roger Goodell and Jay-Z announced the deal, Mr. Kaepernick posted to Twitter: “Today marks the three year anniversary of the first time I protested systemic oppression.” He then added a veiled jab at the league’s new alliance. “I continue to work and stand with the people in our fight for liberation, despite those who are trying to erase the movement!”