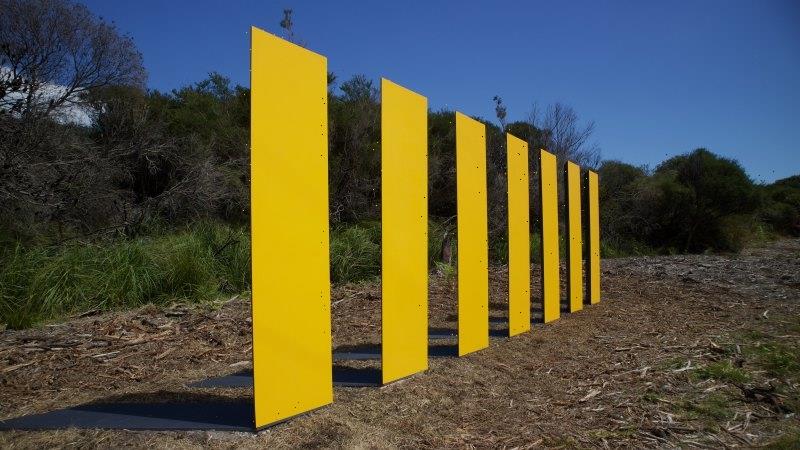 Of all the art events stifled by the pandemic, Sculpture by the Sea must be among the hardest hit. Until last year the annual stroll along the shore between Bondi and Tamarama had become part of Sydney life and a reliable tourist magnet. At its peak SXS has posted attendances of more than 500,000, a figure that would send any museum director into raptures.

In the time of COVID-19 the idea of people swarming along a narrow pathway, almost shoulder-to-shoulder, is an alarming prospect even allowing for masks and fresh air. As a result, SXS has gone into a hibernation from which it is expected to emerge in the new year, perhaps as early as March or April. 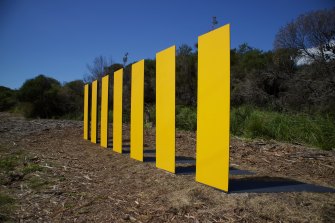 There have been many attempts to repeat the SXS formula of placing sculptures in the natural environment, but organisers soon realise what a huge logistical exercise is involved. To pull off a sculpture-in-the-landscape show, one needs a reliable venue, firm supporters, and a lot of personal determination. At least one of these offspring, Les Sculptures Refusées at Q Station, North Head, might be in it for the long haul.

Featuring sculptures not selected for the most recent, long-delayed SXS, the show echoes the Salon des Refusés staged every year at the S.H. Ervin Gallery for works rejected from the Archibald and Wynne Prizes. The chief organisers are sculptors Tania McMurtry and Simon Hodgson, who both have pieces on display but were ineligible for this year’s prize, for which I was one of the judges.

Last year the inaugural Refusées featured seven participants, this time there are 23 sculptures by 20 artists. One of the best aspects of this event is the venue: Q Station is a slice of history miraculously preserved from developers, complete with bushland, grassy slopes, and panoramic views of the harbour. One can even stay overnight in buildings once used to house the passengers that arrived on ships which might have been exposed to infectious diseases. The quarantine facilities operated on prime real estate from 1832 to 1984, and there are still many migrants who remember spending their first weeks in Australia at North Head.

The first work one encounters is a row of bright yellow rectangles by the side of the entrance road. This is Crossing by Sarah Fitzgerald, who gives every indication that she trained as an architect. If you think the piece looks like a vertical pedestrian crossing, that’s exactly how the artist describes it. Most sculptures placed in the landscape either try to blend in with their surroundings or create a startling contrast with the natural world. Fitzgerald takes the latter option, with an aggressive visual intervention. Inevitably, such works become self-reflexive, presenting their own orderly geometry as a comment on the human need to create rules and structures.

Christina Frank takes a contrasting approach with a work called Pram. As the name suggests, the sculpture is based on a baby’s pram, but made from chicken wire, wool, twigs and leaves. It’s a fragile-looking object with an inherent pathos, suggesting a child that has left the nest. The piece gains a lot from being positioned in front of a brick bungalow, with a Hills Hoist in the background. Seen from a distance it’s a perfect, melancholy vignette of suburbia. I couldn’t help thinking of that early Jeffrey Smart painting, Holiday resort (1946), in which a pram stands unattended on a piece of sandy, barren soil. There was also a suggestion of Craig Handley’s dreamlike suburban pictures. 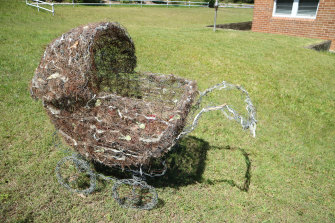 Frank’s Pram is a poetic object, but Orest Keywan’s Eastern Gate is a poetic abstraction. A tall thin gateway made from pieces of iron and painted white in a rough, splashy manner, it’s a simple demarcation of space that opens an imaginary portal in air. It’s the essence of every gate, door or archway you’ve ever seen, but there is no supporting structure, no building or wall attached. It stands like a fragment of ghost architecture, a metal frame that speaks less about itself than about everything that’s absent from this scenario. 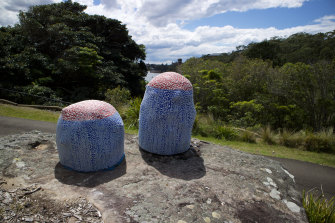 The prize this year, of relatively modest proportions, went to Anna Dudek for After Chinati, an arrangement of three large perspex cubes inside an abandoned pavilion that appears to have once been a greenhouse. The cubes refer to the American minimalist, Donald Judd, whose modular sculptures are exhibited en masse by the Chinati Foundation, in the town of Marfa, Texas.

After Chinati is a work that probably works best on a sunny day when beams of light are filtered through the perspex, splashing colours on the ground. It also gains from the grid-like shadows cast by the roof panels. Dudek gives us a carnivalesque reconsideration of Judd’s austere cubes. In place of those obdurate, geometric solids she has created three weightless, translucent cubes, pierced by light on all sides, radiating colour like prisms. 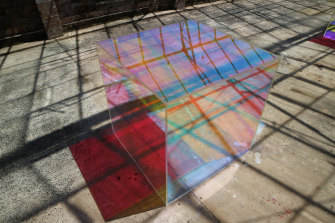 As with every art exhibition in which there’s a prize involved, there’s no meaningful way of comparing works as diverse as Akira Kamada’s Requiem – a circle of smooth, burnt tree trunks lying on the grass, with say, Simon Hodgson’s Kilro, a yellow, abstract sculpture. The first harks back to the recent bushfires, the second is rigorously formal in its aims. Is wood better than steel? Is content more virtuous than pure abstraction? If we could make such cut and dried distinctions there’d be very little incentive to keep looking at mixed exhibitions. 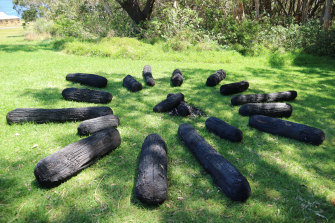 A work such as Tania McMurtry’s The Shadow Lines is ostensibly abstract but there’s a quiet emotional charge in these two vertical rows of timber beams propped up with thin steel supports. Perhaps it’s because of the organic nature of the wood or because the two rows curve gently towards each other, as if hesitating to meet in an embrace. It creates a passage through which we can walk, serving as a metaphor for a personal journey or transformation.

In McMurtry’s case, that passage was from Northern Ireland 40 years ago, but her work is still considering what it means to divide one’s life between two worlds. It’s a thought that must have weighed heavily on the minds of thousands of migrants who got their first taste of life in Australia at the quarantine station.