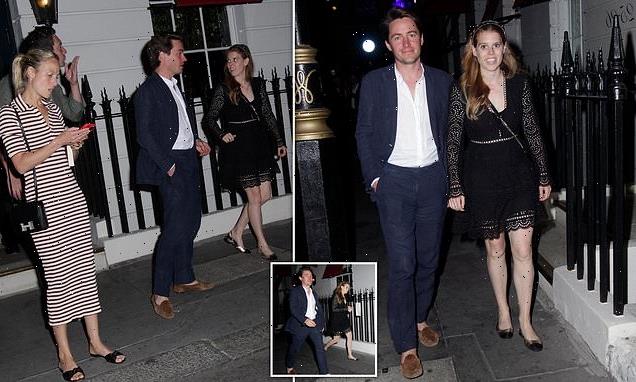 Princess Beatrice cut a chic figure last night as she headed out for a double date night with her husband Edoardo Mapelli Mozzi at an exclusive member’s club in Mayfair.

The daughter of Prince Andrew and Sarah Ferguson, 33, was all smiles as she joined her husband Edoardo Mapelli Mozzi, 38, at Oswald’s in London yesterday after enjoying a night on the town.

The couple were joined by Meghan Markle’s BFF Misha Nonoo and her billionaire oil heir husband Mikey Hess at the exclusive club.

The royal has been quite the royal social butterfly of late as she refuses to hide away amid her father’s sex abuse scandal – with the mother-of-one attending Glastonbury, Royal Ascot a summer ball, and a Rolling Stones Concert in a matter of weeks. 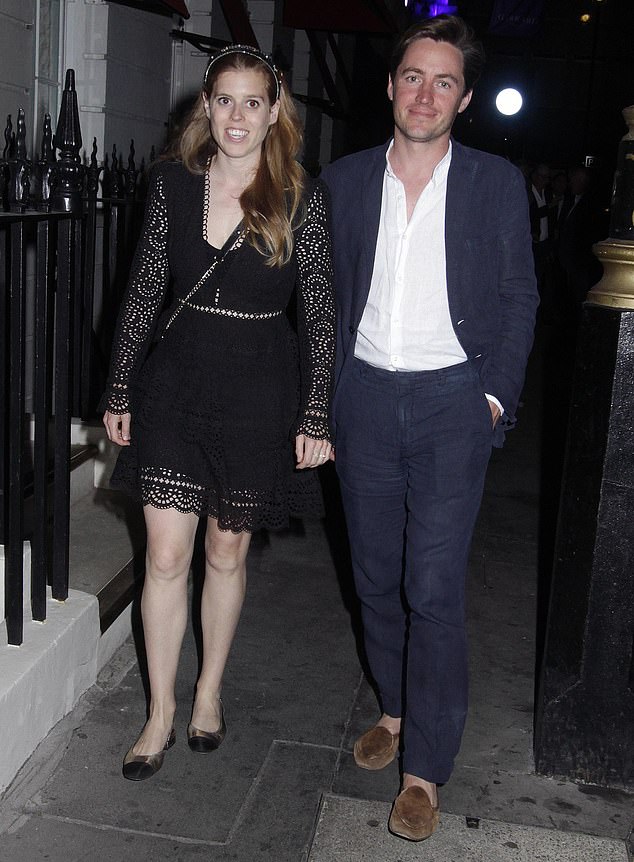 Princess Beatrice, 33, cut a chic figure last night as she headed out for a double date night with her husband Edoardo Mapelli Mozzi, 38, at an exclusive member’s club in Mayfair 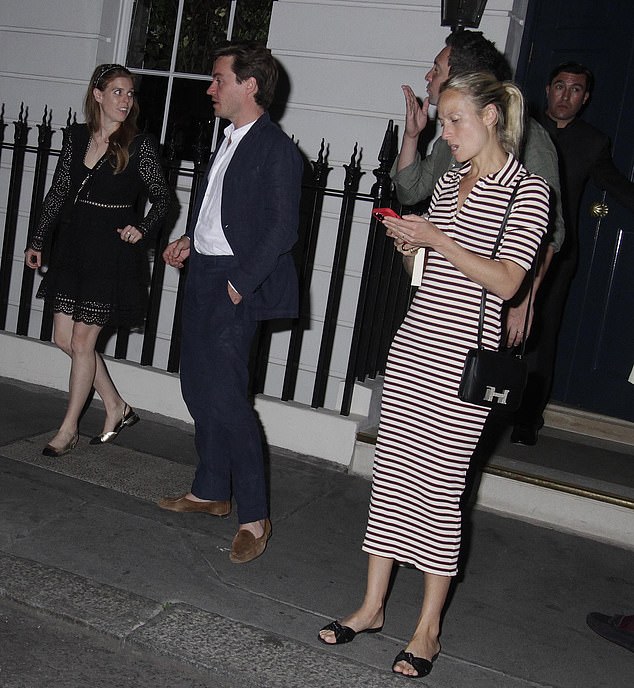 Showing off her sartorial prowess, Beatrice opted for a trendy black lacey dress for the occasion.

Keeping a natural look, Beatrice opted for minimal make-up with just a light layer of foundation and lick of mascara to emphasise her good look.

Despite it being a Monday night, the couples appeared to enjoy their evening at the exclusive venue, leaving just after midnight.

Outside, Mikey could be seen blowing a kiss to Beatrice and Edoardo as they departed the establishment. 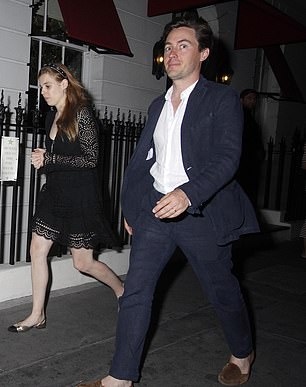 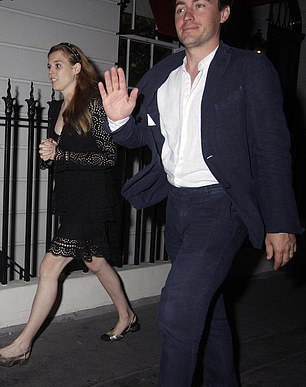 Showing off her sartorial prowess, Beatrice opted for a trendy black lacey dress with a matching headband for the occasion

The club on Albemarle Street in Mayfair is famous among wine connoisseurs, and is owned by fellow environmental activist Robin Birley, whose father named his famous members’ club Annabel’s after his socialite wife – Lady Annabel Goldsmith.

Prince William, who was seen enjoying a night with friends at the club in November, is also said to be a member of 61-year-old Etonian Birley’s secretive member’s only club 5 Hertford Street.

Joining costs £1,800 a year and members – rumoured to include Harry Styles, Margot Robbie, Mick Jagger and numerous royals – need to be recommended by a proposer and a seconder.

Misha has long been friendly with a number of members in the royal family, including Beatrice and Eugenie.

Princess Beatrice has known Misha for years, and attended her wedding to ex-husband Alexander Gilkes’ in 2012 alongside her sister Princess Eugenie. 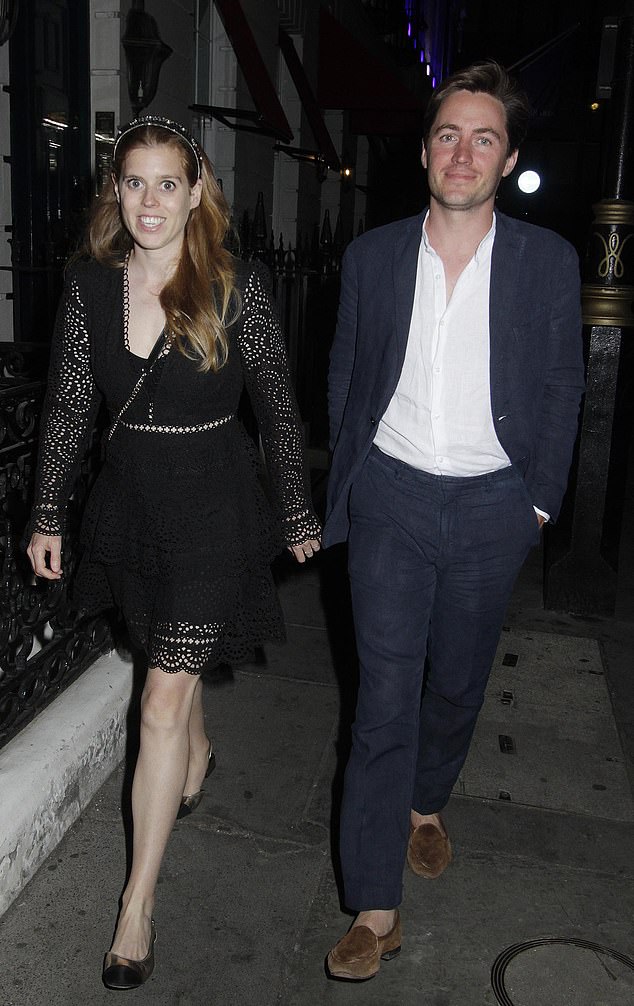 Keeping a natural look, Beatrice opted for minimal make-up with just a light layer of foundation and lick of mascara to emphasise her good look 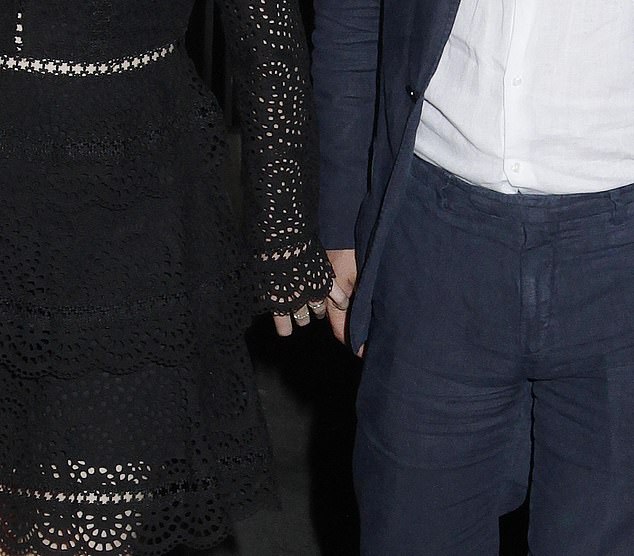 The couple, who tied the knot in 2020, brushed hands as they walked into the venue last night in Mayfair

Beatrice’s packed summer diary: How the royal made near non-stop  appearances at exclusive nightclubs, music festivals and royal events

3 June – Service of Thanksgiving, Night out at Maison Estelle

4 June – Platinum Party At The Palace

26 June – Seen on another day of Glastonbury

Meanwhile the sisters also attended her wedding to Mikey in 2019, with Eugenie even acting as a bridesmaid at the event.

And Meghan has been close to Misha for many years and is rumored to have set up the former actress on her first date with the Duke of Sussex in 2016, although this has never been confirmed.

The latest appearance from Beatrice comes as the eldest daughter of The Duke and Duchess of York continues to make regular public appearances this summer, enjoying a number of events alongside her husband Edoardo.

And last weekend she was spotted attending the Rolling Concert in Hyde Part as art of the British Summer Time festival.

The royal was also snapped soaking up the atmosphere at Glastonbury in late June as she walked alongside her Italian beau, just a week after she also attended the National Gallery’s summer party.

And it’s far from the first time the notoriously-private royal has been spotted out and about on the social scene this summer – with Beatrice also snapped visiting exclusive members clubs in the city to catch up with friends and spend time with Edoardo.

On many of her appearances, the mother-of-one has appeared much like any 30-something, as opposed to the Queen’s granddaughter – strolling casually through Glastonbury and beaming widely as she posed at Ascot.

The move appears to be a distancing of Beatrice from her father, as she settles into a royal life without Prince Andrew in a public role in The Firm.

It comes after a difficult period for Beatrice, who royal commentators have previously said has been ‘devastated’ by accusations by Virginia Giuffre that the Duke of York sexually assaulted her. Prince Andrew has categorically denied the accusations. 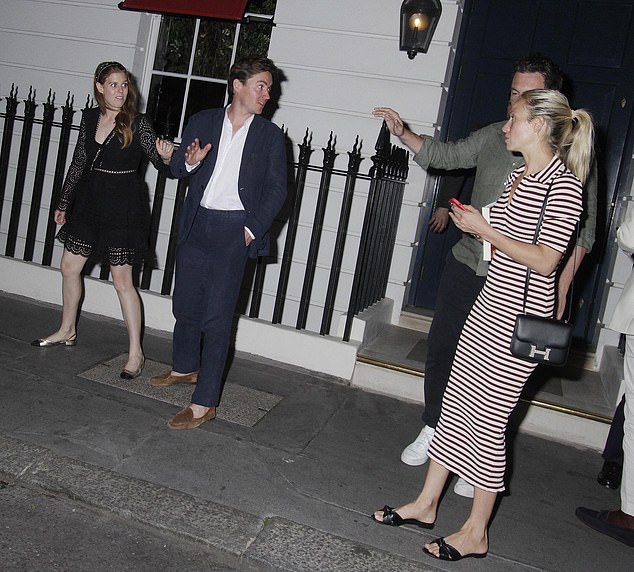 Edo and Beatrice were joined by friends Misha and Mikey for the evening out, with the couple waving goodbye to one another at the end of their night 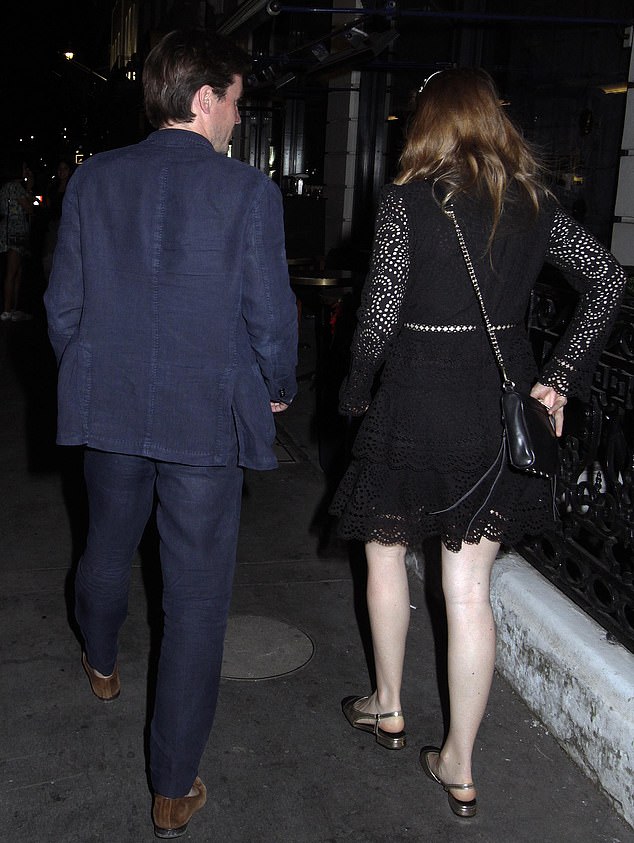 Despite it being a Monday night, the couples appeared to enjoy their evening at the exclusive venue, leaving just after midnight