Lockdown has caused many of us to reflect on life and Patsy Kensit is no different. ‘My childhood dream when I was 11 was to meet Nick Heyward from Haircut 100,’ she laughs.

‘Now I’ve gone through the menopause. They call it the change because your body is changing. Men get big bellies and a red sports car. We get hot flushes and brain fog but am I still a hopeless romantic? Yes.

‘Do I believe in love? Yes, of course I do — but with the hot flushes and the foggy brain comes wisdom.’

Patsy, who turns 53 today, would be the first to admit that wisdom has been hard won.

Thrust into the spotlight at the age of four, when she appeared in a commercial for Birds Eye peas, Patsy has worked in the industry ever since, never missing a day’s work despite the dramas that have shaped her. 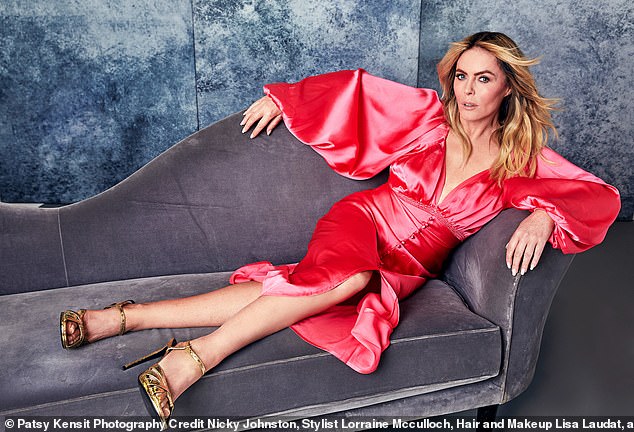 Although half a lifetime has passed since the one that most defined her, she is visibly moved as she recounts the childhood trauma that would have floored the strongest soul.

Patsy spent the best part of her childhood worrying from one week to the next that her mother, Margie, who was diagnosed with breast cancer when she was five years old, wouldn’t be there. So much so that she lost count of the times she went to the hospital to say goodbye.

‘It was horrible. I had that constant fear of her dying from the age of five until she passed on when I was 22. From the age of seven or eight, I was on a quest to work and make money so I’d be able to pay to make her healthy. I’d think, “If I can make everything around us okay, it means she’ll be here.”’

Patsy, whose father Jimmy died from leukaemia when she was 17, has never stopped missing her mother. She was, she says, ‘an angel’ and her best friend.

‘She was the best listener. I was always able to vent and talk to her about everything. When she had about a week to live, things weren’t going very well at home. I went to see her and she looked so beautiful and frail.

‘She was saying, “What’s the matter? Is something the matter?” There was. All I wanted to do was spew it all out to her. But, I made the decision I wasn’t going to.

‘I said, “Everything’s fine.” Why would she want to have to listen to something negative when she was facing death? When I left the hospital that day I thought, “Today’s the day. I’ve become an adult.”

‘When both your parents have gone, you’re an orphan. It doesn’t matter how old you are. You have to grow up.’

To outsiders, Patsy had done an awful lot of growing up already by then.

Just 18 when she won the role of the female lead in Absolute Beginners, starring alongside David Bowie, the film propelled her to stardom and took her family out of poverty.

‘In my first home we lived in two rooms and all shared the same bedroom,’ she says. ‘Then I got these childhood roles in things like The Great Gatsby at age four, The Bluebird when I was six. I was picked up by the chauffeur with a hat on in those days in a Bentley being driven to Pinewood [Studios] where Ralph Lauren was fitting me for my costume.

‘Or I’m flying with Elizabeth Taylor on a Swiss airline 747 chartered just for her and going back to Russia to complete a movie.

‘Then I’d go back to my life of having to go to school. I paid to go to a really good private convent school with the proceeds of my childhood acting until I was 17 but lived in a council house.’

Her father, an associate of the Kray twins, spent her childhood in and out of prison. He was jailed twice, once when she was six for 18 months, then again at the age of 11 for five years. On both occasions he was jailed for long firm fraud — where a fraudster sets up a bogus business, says he will pay for goods on account then disappears after the goods are delivered without paying.

Patsy only learned this when taking part in an episode of BBC’s Who Do You Think You Are? At the time she believed he was an antiques dealer.

‘I lost my father when I was 17. He was a flawed man but he was my father and I loved him.

‘I didn’t recognise it until about 15 years ago but I’d always want to be in a relationship with someone who goes away all the time. I’ve figured that out now and compartmentalised it in my head.

‘Having said that, I’ve had great loves and out of that came my two boys.’

Patsy’s boys are James, 28, from her second marriage to Simple Minds singer Jim Kerr and 21-year old Lennon from her third marriage to Oasis’s Liam Gallagher.

Her face lights up when she talks about them. The boys are, she says, her ‘passion’ and her ‘moral compass’ as she’s ricocheted from marriage to divorce four times.

Dare I suggest there was a time she seemed to be giving Henry VIII a run for his money in the marital stakes. She laughs.

‘I know what I don’t want now,’ she says. ‘I regret not having a sense of humour when I was going through things but you’re so busy rushing, rushing. Contrary to the myth, I didn’t have huge divorce settlements so I’ve always worked and paid my way.

‘I had to get up, get out and show the boys that, yes, life could be hard but it’s how you behave in adversity that matters.

‘I was always dashing here, dashing there, so my boys would never have to worry about me not being there,’ she says.

Eight years ago, Patsy was rushed into hospital to have an emergency hysterectomy after two potentially cancerous tumours were discovered. Doctors feared ovarian cancer. She thought, ‘Is this my time?’ but only ever told her sons she was having, ‘two cysts zapped’.

‘My job was to protect my sons and let them have as normal an upbringing as possible,’ she says.

Now, she is working as hard as ever. At the weekend she appeared in the second series of ITV’s McDonald & Dodds.

‘The plot focuses on these four characters who were faces in the Eighties who’d remained friends during the demise of their fame. In the Eighties, you could dream big because big things were happening to people,’ she says.

Big things certainly happened to Patsy. Filming with Bowie, she effuses, was one of the highlights of her career.

‘Instead, when we were introduced, he shook my hand and moved on. I was crushed. I was a daft teenager. Then, one day after we started shooting I was sitting in make-up waiting for the make-up artist when David walked past.

He looked in and said, “Are you alone?” I said, “Yes”. He came in, didn’t say anything, just picked up the hairbrush and brushed my hair. It was the most sensual experience I’ve ever had.’ She smiles devilishly.

‘Well . . . and Mel Gibson,’ she says, remembering her love scene in the film Lethal Weapon 2.

More recently, Patsy has been better known for her role as Faye Morton in the BBC hospital drama, Holby City.

Indeed, when she reluctantly threw in the towel for personal reasons ten years ago, she received ‘the most “beautiful letter” from the corporation’s legendary boss of continuous drama, John Yorke.

‘He knew I’d been going through some personal stuff, splitting from my last husband Jeremy Healy, and I hadn’t called in sick once.

‘A lot of people wouldn’t be able to get out of bed with some of the stuff I’ve faced, but I’m not this weak, fragile, distressed human being. Ask my boys.

‘The way I rationalise it in my head is there’s this person that’s been created that isn’t me. I’ve had things happen to me which I accept and own but the stupid things I’ve said over the years don’t define the woman I am and the things I’ve been through.

‘Maybe I had a few late nights in the Nineties as many people did, so what? I’m not the only woman who’s been through a divorce. I can’t think of anything worse now than inhabiting the London scene. It’s not my scene at all. ‘I don’t want to be in a club at 4am. I go to bed at nine. I date — of course, I date — but right now, in lockdown, my only serious relationship is with my cat, Bowie.

‘I’m very grateful for my life,’ she says. ‘It got me out of where I came from. I broke the poverty cycle. Of course, I miss having a hug and being in a room with somebody in lockdown but right now I feel very strong and happy. I’m not a distressed woman who’s crying out for love. I’m very fulfilled.’

McDonald & Dodds is on ITV on Sunday at 8pm.