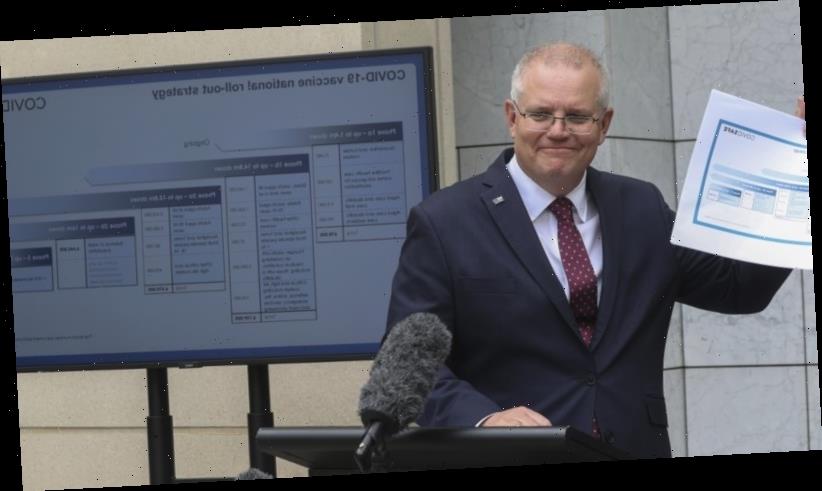 Half of all Australians could be vaccinated against coronavirus before the middle of the year under the federal government's plan, with frontline health and aged care workers and quarantine staff at the top of the list.

Healthy adults aged under 50 who don't work in high-risk sectors will probably wait until mid-2021. Children will be the last group considered for vaccination. 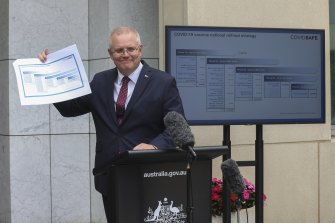 Prime Minister Scott Morrison and his senior health advisers outlined the vaccine rollout plan on Thursday, with the first doses expected to be given in mid-to-late February. The timetable comes after weeks of pressure to speed up distribution, which the government had previously said would start in March.

The Therapeutic Goods Administration is now expected to approve the Pfizer/BioNTech vaccine around the end of January but the pharmaceutical giant has a global rule that doses won't be delivered until two weeks after regulatory sign-off. Australia has a contract for 10 million doses.

Approval for the AstraZeneca vaccine, manufactured in Melbourne, is expected in February.

The vaccinations will be free, as are COVID tests.

In NSW, some GPs and private clinics have required patients to pay a “consult fee” for testing. State Health Minister Brad Hazzard said that was disturbing and every person in Australia should be tested for free, whether or not they had a Medicare card.

Federal Department of Health head Brendan Murphy said the government was working with medical bodies on how to deliver vaccines without any cost barriers.

"We can guarantee that the vaccine will be free and will be delivered free," he said.

The government hopes to start vaccinating 80,000 people a week then ramp up, with a target of 4 million people immunised by the end of March. At this stage, it aims to vaccinate almost 13.4 million people – about half the population – by the middle of the year.

The two vaccines will be distributed separately and all doses recorded on the Australian Immunisation Register to avoid situations seen overseas where people have been confused about which they received. Both require people to have two doses, which are administered within weeks of each other.

Between 30 and 50 "cold-chain" hubs will be set up in locations to be decided by state governments to distribute and administer the Pfizer vaccine, which must be stored at minus 70 Celsius.

The AstraZeneca version will be delivered via GP respiratory clinics, people's regular doctors, dedicated state government clinics, Aboriginal-controlled health services and potentially at pharmacies later in the year – in more than 1000 locations.

But Mr Morrison warned the vaccination was "no silver bullet".

"Once the vaccination starts, COVID-safe practices do not end. They continue," he said. "The vaccine both here in Australia and around the world will continue to be rolled out but it will still be a fight over the course of 2021."

"None of us want to be queue jumpers but we also recognise the public confidence role," Mr Hunt said.

Infectious diseases expert Robert Booy supported the TGA's approval timeline, saying there was an advantage in not having the vaccine straight away because Australia could get a clearer picture from the experiences of other countries that had rolled it out on an emergency basis.

"That will maximise public confidence in the vaccines and maximise the percentage of people who take up the vaccine because they know it will be safely and effectively delivered," Professor Booy said.

However, University of Sydney vaccine expert Julie Leask cautioned that governments had to make sure they had excellent communication strategies and gave the public enough detail about what was going on, or risk leaving the community vulnerable to anti-vaccination activism.

"If you leave an information gap, somebody is going to fill that and if the first information available to people when they are shaping their view scares them off the vaccine it is going to be harder to bring them around," she said. "But you never know. Look how well we've gone during this pandemic and the trust the government has enjoyed from the community."

Professor Leask said once Australia had enough vaccinated personnel working on its borders and in the quarantine system, the country would have bought time to immunise the rest of the population.

National cabinet will decide on Friday whether to apply more stringent requirements to international arrivals, particularly those coming from the UK where a more infectious strain of the virus is rampant.

Federal Chief Medical Officer Paul Kelly said while the highly infectious strain had been found among people in hotel quarantine in Australia, the system had so far kept it under control but it was wise to look at what else could be done.

Brisbane was the only state or territory to record a new locally acquired case in the last 24-hour reporting period – a casual cleaner at a quarantine hotel in Brisbane. On Thursday morning, NSW detected one local case. The man in the upper northern beaches associated with the Avalon cluster will be included in Friday’s tally.

NSW recorded 27,879 tests in the 24 hours to 8pm on Wednesday, a considerable drop compared to the 32,667 tests performed on Tuesday.