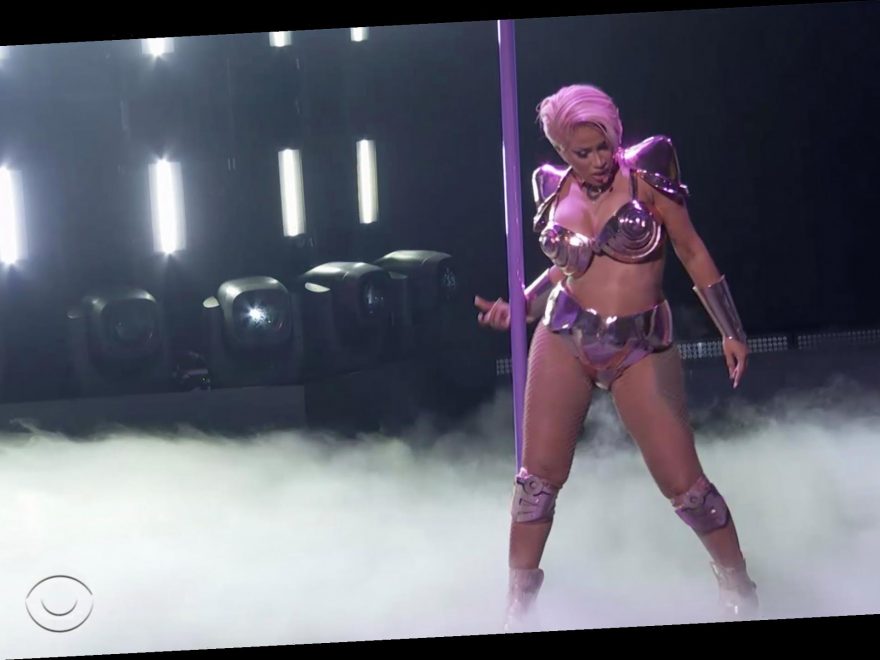 Billie Eilish dances to Harry Styles before her Grammys 2021 performance

Cardi B channeled her stripper past with some sexy pole dancing at the 2021 Grammys.

The 28-year-old, along with Megan Thee Stallion, 26, oozed sexiness onstage Sunday as they performed “WAP” for the first time together ever.

After Megan Thee Stallion warmed up the stage with “Savage” — and some tap dancers pulling Nicholas Brothers moves down a flight of stairs — Cardi came out and things got really hot as she sang “Up.”

But things got really X-rated when the pair broke out into “WAP” as Cardi and Megan writhed, twerked and grinded together on a huge bed.

It seems everyone can’t get enough of “WAP,” which was released in August and even became its own internet phenom, with dance challenges. (Just don’t expect her daughter Kulture to know the words since the 2-year-old has yet to hear it.)

However, the earworm was not nominated for a Grammy this year — a decision made by Cardi and her label, Atlantic Records, so it can be submitted next year as part of her next album.

In February, she followed up with a new single, “Up,” with a video full of twerking, tongue kissing and sexy looks.

But beyond her Grammy performance, Cardi has something big to celebrate, too. Last week, her major-label debut single “Bodak Yellow” was certified diamond by the Recording Industry Association of America. This honor — which signifies 10 million units (either a digital song sale or 150 on-demand audio and/or video streams) moved — means she’s the first female rapper to achieve a diamond single award, according to the RIAA.

“I just want to say thank you guys so much because without you guys, it wouldn’t have happened,” she said in a video. “It really made my day. And it really uplifted me.”

Something that didn’t quite uplift Cardi? E!’s upcoming “True Hollywood Story” episode, which she distanced herself from on Twitter.

“I love E! And I always been grateful for all the love but I did not approve of the E Hollywood story,” she wrote about the episode, which airs Monday, March 15. “My life is my story. How can someone tell my story without asking me.”

However, she did tease a possible Cardi B biopic for the future — which won’t surprise many fans, as she’s been open about her past life as a stripper and transparent about plastic surgery, body image and other “taboo” topics.

“I would love to tell my story myself when I’m ready,” she wrote. “I been thru & been influenced by a lot of bad sh-t since a teenager That when I’m ready I will like to talk about.”

Biopic or not, we’re sure to hear more from Cardi soon. She recently tweeted that we can expect a new album in the coming months.

“After next week I’m going full album mode,” she tweeted.