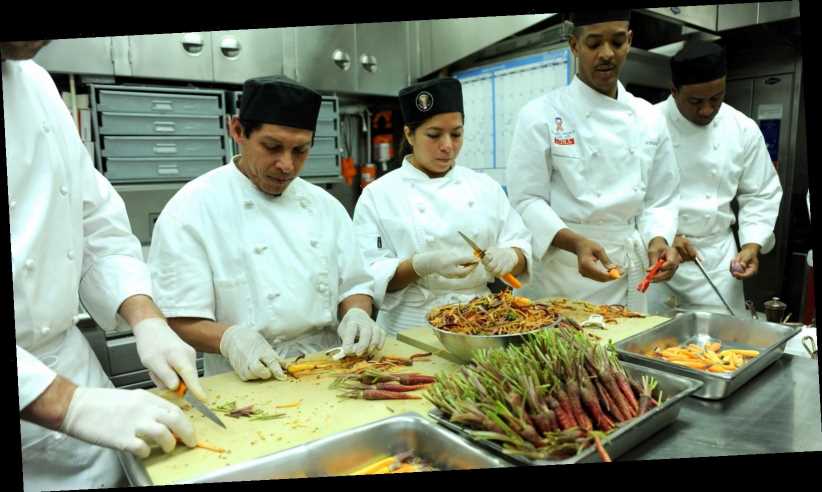 When you’re commander in chief and president of the United States, you probably have a pretty amazing kitchen with a highly competent team of White House chefs, who are skilled enough to prepare a wide variety of meals, from banquets for heads of governments and heads of state to midnight snacks and healthy dishes for potentially picky teens.

Still, you’d probably get bored of eating the same kind of food all the time, which would explain why Washington D.C. is full of eateries that can legit-claim to count a president or two as their patron. Some restaurants, like Martin’s Tavern, claim to have served every U.S. president since Harry Truman, who sat at booth six, to George W. Bush (who had a liking for table 12). Booth three even has a plaque because that’s where John F. Kennedy was said to have proposed to Jackie in 1953, but this is before they got to the White House, of course (via Chowhound).

Donald Trump only ate at his hotel's steakhouse

Then there’s the Old Ebbitt Grill, which Eater says was founded in 1856, but has moved around quite a bit. It attracted the likes of Ulysses S. Grant, Andrew Johnson, Grover Cleveland, Theodore Roosevelt, and Warren Harding, who all reportedly enjoyed a tipple at the bar.

And if you’re looking for something a bit, well, less historic, there’s The Coupe, Molly Malone’s, and Ted’s Bulletin, which count among the list of places where former President Barack Obama stopped by to enjoy a burger (via Eater).

But all these esteemed, pedigreed diners fell out of favor between 2017 to 2020, and not just because of the pandemic (which kept all of us at home through most of 2020), but because former President Donald Trump actually didn’t eat out. During his entire four years at the White House, the Washingtonian says he only ate out once while he was in D.C. — and only at the Trump International on Pennsylvania Avenue. It is even said that Trump always orders the same thing at the Trump steakhouse, BLT Prime: shrimp cocktail, fries, and a steak cooked well-done. When served up with an extra helping of care and attention from fans and staff — why would you want to go anywhere else, indeed?