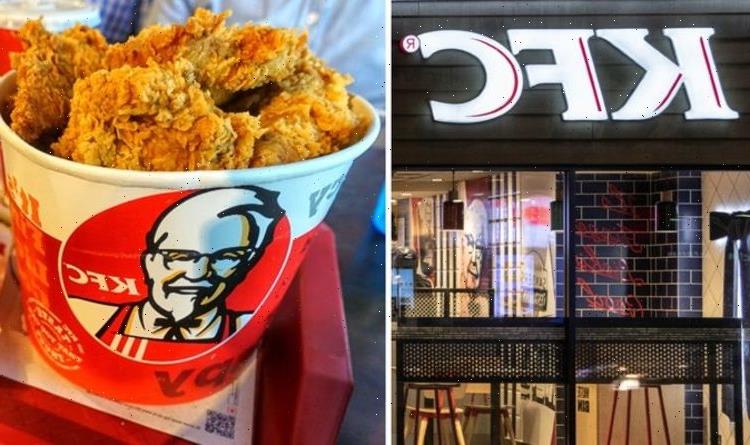 Back in June, McDonald’s confirmed it was dealing with a nationwide Chicken Selects shortage due to high demand. Now, KFC is facing a similar issue. The company is struggling to deal with customer orders because of various issues related to the pandemic.

On Wednesday, August 11, KFC announced there had been “some disruption” to its food deliveries in recent weeks.

The fast-food chain wrote on Twitter: “Just a heads up that across our country, there’s been some disruption over the last few weeks – so things may be a little different when you next visit us.

“You might find some items aren’t available or our packaging might look a little different to normal.

The company added: “In the meantime, please be patient with our incredible teams.

“They’re doing a brilliant job despite the disruption.

“We can’t wait to see you soon for your next fried chicken fix. Thanks for understanding.”

KFC did not specify which food items are missing from its menu, or what the reasons behind the shortages are, but the news comes as many other companies across the country are dealing with the same issue.

The hospitality, food, and logistics industries are facing staff shortages due to the pandemic, as well as the “pingdemic”.

Due to Brexit and Covid-19, many EU citizens working in the UK have returned to their native countries.

This has contributed to missing items in supermarkets and restaurants as suppliers have been struggling to deliver stock on time.

The “pingdemic” has also led to a shortage of staff in the logistics sector as employees have been forced to self-isolate after being pinged by the NHS Track and Trace app.

This is not the first time KFC has been short of food.

In February 2018, the company had to shut most of its restaurants across the UK and Ireland after “teething problems” with a new delivery contractor meant it had run out of chicken.

Due to delivery issues, only around 80, out of a total of 900, KFC restaurants were open at one time.

At the time, KFC issued a statement, explaining: “We’ve brought a new delivery partner onboard, but they’ve had a couple of teething problems – getting fresh chicken out to 900 restaurants across the country is pretty complex!

“We won’t compromise on quality, so no deliveries has meant some of our restaurants are closed, and others are operating a limited menu, or shortened hours.

“We know that this might have inconvenienced some of you over the last few days, and disappointed you when you wanted your fried chicken fix – we’re really sorry about that.”

In other food and drinks shortage news, industry leaders have warned of a possible “beer drought” across the UK later this month, expected to hit the country over the August bank holiday.

This is due to those working for logistics firm GXO going on strike over wages.

GXO supplies the British hospitality industry with 40 percent of its beer, therefore it is likely pubs and restaurants will go without the popular drink while the strike goes ahead.

Last month, Joe Clarke, Unite the Union’s national officer for the drinks industry, warned: “A beer drought could result if our members vote for industrial action because they make 40 percent of the beer deliveries in the country.

“This disruption would be on top of the ‘pingdemic’ that is already hitting the sector.”

This week, Mr Clarke confirmed the workers will be going on strike, adding that Unite had called on GXO to “engage in meaningful negotiations regarding a decent pay increase for our members”.