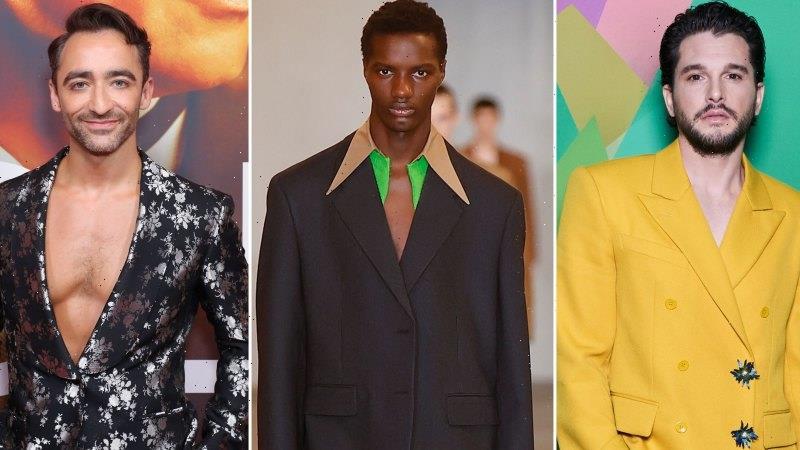 Fickle designers gave with one hand and undressed with the other at the menswear season in Milan and Paris, which finished on Sunday. On the runway there was an abundance of mini-skirts, long underwear and boned corsets but at Prada, Loewe and JW Anderson, traditional collared shirts disappeared beneath suiting.

Ties have already been demoted from essentials to accessories for dandies and financiers, and now the collared shirt is going, going and almost gone on the runway and the red carpet. 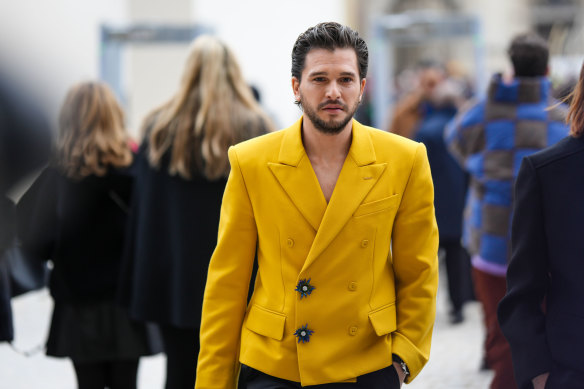 Kit Harington saves on ironing without a shirt at Louis Vuitton’s autumn/winter menswear show in Paris on January 19.Credit:Getty

“Queer men have been doing this for years but to see straight men diving in is exciting,” Backer says. “Let’s get rid of the tropes of men’s and women’s clothing that we grew up with and all enjoy clothes. We should all wear what feels good and this felt right for me.”

This breezy approach has jumped the gender divide where on the other side women such as Cate Blanchett, Jennifer Aniston, Zendaya, Rihanna, and Kim Kardashian regularly champion versions of the power suit where blouses get in the way of a photo opportunity.

Along with discovering the power of a pectoral smorgasbord the trend is part of the ongoing decluttering of traditional men’s staples.

“This is definitely a progression of men moving away from the tie,” says stylist Dale McKie, who has dressed singers Guy Sebastian and Isaiah Firebrace in stripped-back suiting looks. “We have gone from men unbuttoning shirts to their waists to getting rid of the shirt altogether.”

“You don’t need to go the full J-Lo to pull this style off. Look for a double-breasted jacket if you want a higher neckline or wear a waistcoat beneath your jacket for greater definition around the waistline. Having a good physique certainly helps.”

“Extraneous details are shorn from garments that wrap the form in a tactile exchange, against
a naked body,” Prada’s show notes stated.

Backer’s tactile exchange on the Babylon red carpet with his jacket from Couture Menswear had more to do with Sydney’s summer humidity than an intellectual approach. “I had a shirt, tie and cufflinks ready to go, but it was hot and I thought that going shirtless would suit the raunchy vibe of the movie. A quick look in the mirror and I knew it was the right choice.”

“I felt great on the night and would do it again. Perhaps not at a family wedding or if I make it to the Oscars but you never know.”

The trend is still trickling down, with Australian menswear brand MJ Bale reporting steady sales of white shirts. It’s a case of baby steps, with staff noticing an increase in customers wearing polo-shirts and T-shirts beneath suit jackets during summer.

At Politix, head of design Paul Burden adds singlets to the T-shirt mix beneath but has seen the shirtless Chalamet-effect on social media.

“It’s all part of the de-stuffication of the suit and allowing customers to see its versatility,” Burden says. “I feel that we have been moving in this direction for years but Timothée Chalamet and Harry Styles have given men much more confidence.”

“For the body-confident it’s an easy win, especially if you have a smooth chest, but I still think the sight of a hairy chest could completely kill the trend.”