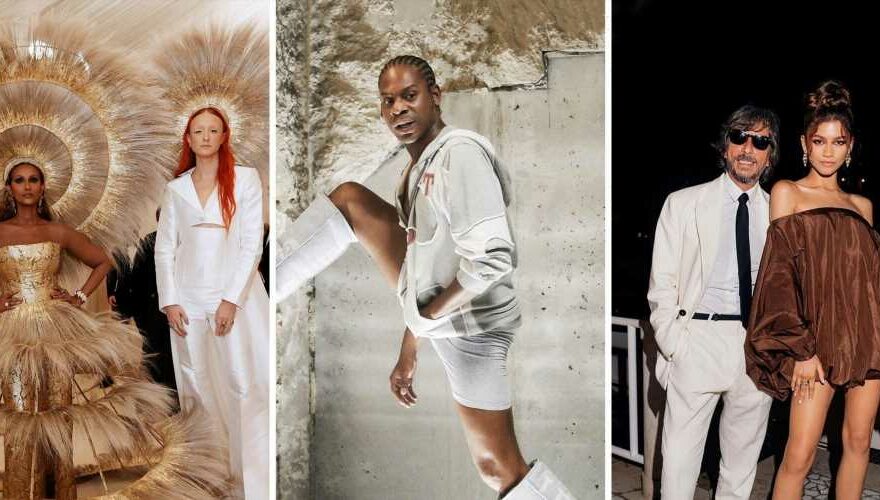 For every celebrity whose style you've admired over the past year, there's been a team of talented professionals working behind-the-scenes, crafting the outfits that have turned these stars into full fashion icons. Custom gowns and accessories are dreamed up by talented designers, who are no doubt aiming for that major 'wow' moment. And those seemingly effortless sweater-and-jeans combos? They come from the minds of hard-working stylists, who make sure every piece is perfectly paired.

Still, as we look toward the future, we know that simply enjoying these looks is not enough. The industry as a whole could benefit from change, opting for more sustainable and environmentally-friendly practices. There's no shame in reimagining and wearing what's already in your closet, and if you're going to shop, it's worth it to do your research, supporting brands with goals that align with your own.

As for where to start? We've got the solution as we enter into 2022. The designers and stylists ahead, selected as part of our December issue's "Voices of Style" are sparking conversations about sustainability, representation, and what qualifies as high fashion — and making irresistibly good outfits while they're at it. Beloved for his lively and optimistic approach to designing, the Valentino creative director has repeatedly delivered the kind of fashion we want coming out of a global pandemic: bold, beautiful styles that make us dream about getting dressed up. The cherry on top? Seeing his vibrant creations in the wild on everyone from Zendaya to a posse of A-list fans at the Met Gala (Whoopi Goldberg, Carey Mulligan, and Normani, to name a few). The rabid demand for Clemens's vegan leather Shopping Bag (aka the "Bushwick Birkin") in 2020 pushed his Telfar brand, which he launched in 2005, to an entirely new level. But this year the streetwear virtuoso solidified his industry status thanks to collaborations with major brands like Converse and Ugg and branching into TV. "I think it's cool that people are discovering me now," says Clemens. "I've been doing what I wanted to do with passion and creativity for the last 15 years, and I'm happy it's starting to move out of a fashion space and affecting more people." The pioneering founder of inclusive label Chromat on the state of diversity in fashion.

"When I started Chromat in 2010, it was difficult to find plus-size, disabled, and trans models — even models of color — at agencies, so it's great to see that diverse casting is the bare minimum at this point. Now the conversation has shifted to who is behind the camera and behind the scenes. It's imperative to include decision-makers [with different perspectives]." The brand continues to push the conversation forward with swimwear: "Bathing suits have been a huge focus for Chromat because of the power that a single garment has over how people feel about themselves. We want to turn something fraught with insecurity into a piece that celebrates all body types." Lizzo, Bella Hadid, Lady Gaga, Zendaya on our very own cover — all the buzziest celebrities have worn Roseberry's striking creations for Schiaparelli this year to great fanfare. But even without the clout of his clientele, the couturier's work stands on its own as high art, thanks to a combination of daring surrealist references and gravity-defying silhouettes. The alum of London's prestigious Central Saint Martins has earned acclaim for taking a gender-fluid tack toward his opulent and romantic runway collections (and, this fall, a joint launch with British jeweler Missoma). He's also gathered quite the crew of admirers, including Solange, Harry Styles, and legendary model Iman.

Since starting her namesake label in 2015, she has quietly built a reputation for making Earth-friendly luxury pieces. Now, as the newly appointed creative director of Chloé, she's bringing her thoughtful sensibility to a larger stage by reinventing the storied French maison's feminine aesthetic (think more free-spirited than frilly) and pushing for sustainable practices (the brand just became B Corporation-certified, a designation that requires rigorous inspection of a company's social and environmental impacts). In an era of overexposure, the notably press-shy founder of Wales Bonner most often lets her work — a meticulously researched mix of traditional European tailoring and Afro-Atlantic influences — speak for itself. The message we're getting? That we want pretty much everything she puts out. The tailor, designer, and self-made man is relatively new on the scene, but with his grit and talent for structured fits, he's sure to become a household name.

Your brand Henry Mask has been spotted on celebs including Jennifer Lopez, Demi Lovato, and LeBron James. Did you expect it to become such a sensation?

My brother and I had a conversation right when the pandemic hit about creating a [mask] company. No one else thought it was a great idea, but I expected it to be a success from Day 1 — which is why I invested so much into it! We've gone through a lot of ups and downs, but it's exciting to know you've built something with family.

How do you hope to shape the future of the industry?

As a Black man in luxury fashion, changing the notion of what luxury designers look like is a big responsibility for me to have. My story isn't one with a benefactor or conventional schooling; it's an underground story of what determination can produce. The industry isn't limited to fashion students and traditional designers; it's open to anyone bold enough to put their stake in the ground and say, "This is what I intend to do."

With your breakout success in the last few years, do you feel you've "made it"?

I'm just getting started. Richfresh and Henry Mask are baby businesses. I've announced myself, and I've made an impact, but I still have so much more to do. The brains behind Bode consistently sets the standard for green fashion by producing her collections in small batches from repurposed vintage textiles. And while officially billed as menswear, her gender-fluid pieces are championed by all sorts of fashion lovers: Just look at Lorde, who was inarguably one of the Met Gala's best-dressed guests this year in a custom Bode jacket, skirt, and headpiece.

The pros behind this year's most memorable celebrity looks proved they can tackle any occasion — from red carpets to virtual ceremonies — and make it fashion. The duo responsible for Regina King's stunning wardrobe is dream team Wayman Bannerman and Micah McDonald, who went into this past year with the goal of bringing some levity through their clients' fashion. "We felt it was important to lift the mood," says McDonald. "Whether through color, silhouettes, or accessories, we wanted to exude joy." The pair's favorite look out of all they styled in 2021 was King's futuristic one-shoulder Louis Vuitton dress at the Golden Globes (above), which they felt perfectly captured the actress-director's essence. "The gown was beautifully structured on her body yet felt cool and effortless," says Bannerman. "It was like armor but still oozed femininity, mirroring Regina herself." "I want to use my platform to amplify voices and inspire young creators who look like me," says Roach, who describes himself as the only Image Architect. The showstopping red carpet styles we live for from mega clients Zendaya and Kerry Washington are testaments to his talent for crafting headline-making looks. The quintessential Roach-styled client? "Someone playful who loves the art of fashion and is not afraid to take risks." This year's InStyle Awards Voice of Style honoree aims for fashion that surprises and delights.

Between working on looks for stars like Cynthia Erivo, Yara Shahidi, and Angelina Jolie, you've had a remarkable year. What does it mean to you to be named the 2021 Voice of Style?

"It means more than just being celebrated. For me, this is an opportunity to bring attention to people who look like me and who've always been told that style and fashion are unattainable for us. This is a mirror of reflection to show people that they can see themselves." How do you want your clients to feel through styling?

"I try to dress people with an angle of joy. Happiness depends on what happens to you, but through all things you can still find joy. No matter what someone may say about their aesthetic, they're joyful."

Looking ahead to 2022, what are you excited for?

"Leaning back into what fashion means to me, which is this imaginary journey and creating these episodes of fantasy in my mind." As the lady behind some of Lil Nas X's biggest wardrobe wins, Musa knows how to make a fashion risk pay off. A few highlights? The rapper's jaw-dropping lilac VMAs outfit, as well as the styling and creative direction for his debut album Montero, an instant classic not only for the bops but also for the music videos' scandalously sexy ensembles. Collaborating with pop superstar Olivia Rodrigo, the pair have been instrumental in developing an image that is both youthful and edgy for the singer-songwriter's breakout year. For more stories like this, pick up the December/January 2022 issue of InStyle, available on newsstands, on Amazon, and for digital download Nov. 19th.