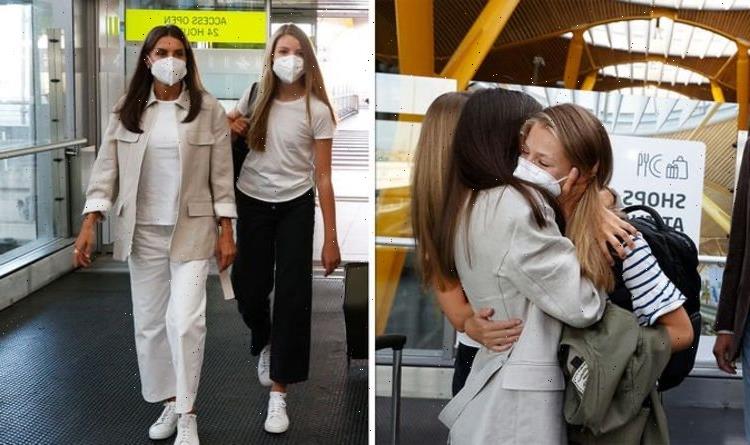 Queen Letizia’s eldest daughter, Princess Leonor, 15, is moving to the UK today to continue her studies at the UWC Atlantic College in Wales. For the occasion, Queen Letizia wore a comfy but chic nude outfit.

Queen Letizia and King Felipe V, along with their younger daughter Princess Sofia, have accompanied Princess Leonor to the airport earlier today.

Before Leonor boarded the plane, the family shared an emotional moment where Queen Letizia and Princess Sofia could be seen trying to hold their tears.

She finished the casual outfit with a light brown jacket with multiple pockets.

On this occasion, the queen opted for natural makeup with a dash of mascara.

She decided to keep her jewellery to a minimum, sporting a pair of gold hoop earrings and a maxi ring.

The 15-year-old was seen carrying a small brown handbag and a khaki jacket.

They are the Hugo Boss ‘Kate’ trainers, which the Spanish royals have been seen wearing several times.

Princess Leonor, who is the future queen of Spain, will start her studies at UWC Atlantic College in Wales next month.

The Spanish royal will be living in Wales for the next two years.

She will be joined by another royal, Princess Alexia, who is the daughter of King Willem-Alexander and Queen Maxima of the Netherlands.

UWC Atlantic College is on the southern Welsh coast and the historic campus includes a library, woodland, and an indoor and outdoor pool.

It was founded by German educationalist Kurt Hahn, also the founder of Gordonstoun in Scotland, where Prince Charles went to school.

This is the first time Queen Letizia has been seen since the whole family were on holiday in Mallorca earlier this month.

The Queen and Princesses looked beautiful while enjoying the summertime in the Balearic Islands.