Just three and a half months after giving birth, Emily Ratajkowski is already back in her daisy dukes! She looked summer chic and casual while out and about on June 28.

Emily Ratajkowski and her husband, Sebastian Bear-McClard, were photographed out in New York City on June 28. Emily looked cool and comfortable in a pair of daisy dukes, which she paired with a white t-shirt, white sneakers, and a red baseball cap. She also wore sunglasses to combat the sunny New York City day. The model held tight to her newborn son, Sylvester, who she held in her arms as she headed to the car. 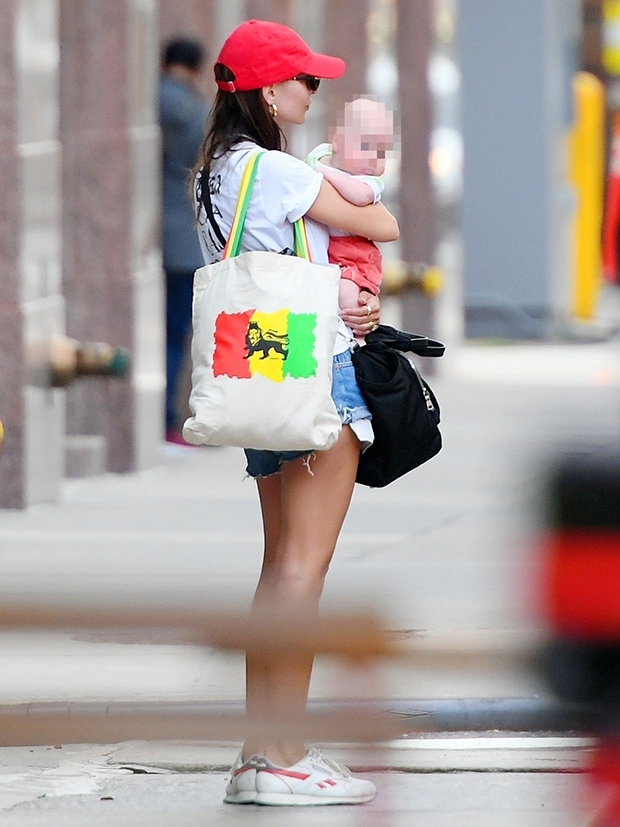 Emily certainly wasted no time bouncing back after giving birth to Sylvester on March 8. In fact, just five weeks after he was born, she was already back in a swimsuit and showing off her post-baby weight loss on social media. Emily looks like she hasn’t missed a beat without very much time going by, and if her routine is the same as it was pre-baby, then she didn’t spend hours intensely exercising to get her body back.

In the past, Emily has opened up about her diet and fitness routine, and admitted that she doesn’t work out much. “I am not a big gym person,” she once revealed. “I really like being outside and doing yoga, so I do a lot of hiking in L.A. and I have a yoga studio really close to my house that I go to, like, once a week.” In another interview, she added, “I don’t have a trainer. I’m just not a crazy fitness person. I’m definitely an outlier in the industry.”

In 2015, she dished about her daily diet, and revealed that she’s not afraid to indulge once in awhile. In fact, most mornings, she has a pastry with her coffee, she told Harper’s Bazaar. Lunch is usually a little lighter, though, consisting of a salad or sandwich, but for dinner, Emily rarely eats at home. “Dinner is my time to be social and catch up with people,” she explained.

Of course, after having a baby, things are bound to change, especially since Emily has been breastfeeding and needs more nutrients for her little one. She has been open about her breastfeeding journey on social media, and has shared various photos of herself and her little one during these intimate moments. Life with a newborn seems to be going pretty well for this gorgeous mama!