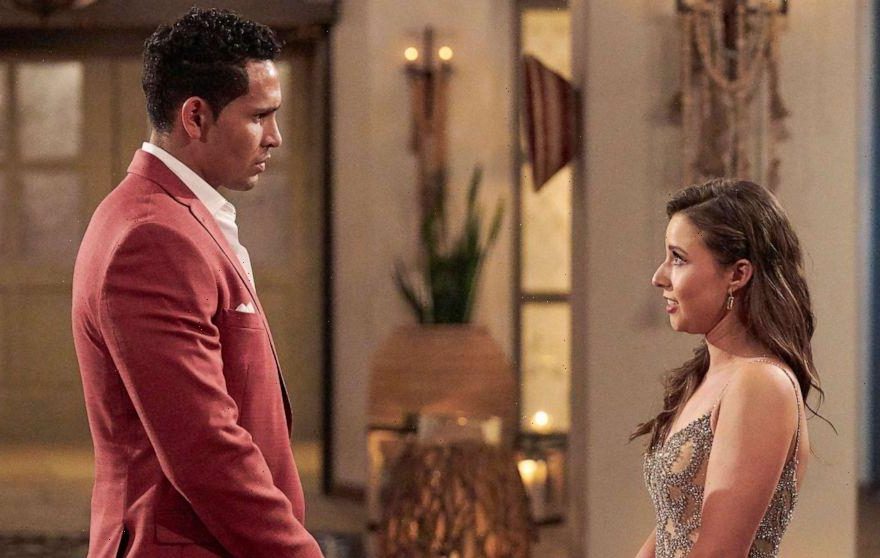 One suitor’s stunning admission led to an epic “rose-drop” moment on Monday’s episode of “The Bachelorette.” However, that wasn’t the only shocker that night as a blast from the past arrived to shake up the competition.

Last week’s episode ended with Thomas’ bombshell admission that he originally entered the competition because he wanted to be the next Bachelor.

That confession came back to bite him during the group date — alongside Greg, Mike, Tre, Andrew M., Andrew S., Josh, Christian and Conor C. — that included a game of Truth or Dare. Tre, with the backing of most of the other men, revealed Thomas’ secret following Katie’s challenge to be “honest and vulnerable.”

Katie rewarded Tre’s honesty by giving him the date rose, but was also devastated to learn that Thomas had been manipulating her, especially since she developed strong feelings for him.

The Bachelorette was in for another shocker when mentor Tayshia Adams announced that “someone from my past,” who believed he was the “perfect match” for Katie, wanted to join the competition.

That someone turned out to be Blake Moynes from Tayshia’s season of “The Bachelorette,” who had previously reached out to Katie before her season began. Katie was intrigued by the proposition, but admitted she was worried that Blake’s sudden entry would impact the “strong connections” she’d already formed.

Before deciding anything on Blake, Katie first had to wrap up the current drama with Thomas.

Thomas realized he needed to do some damage control, so he paid Katie a visit and owned up to wanting to be the next Bachelor, but swore those aspirations disappeared when he developed feelings for her.

Unfortunately for Thomas, the other men banded against him at the pre-rose ceremony cocktail party and confronted Katie with the whole truth about him.

In what had to be the most jaw-dropping rose ceremony in “Bachelorette” history, the group watched in stunned silence when Katie, with the final rose in hand, called Thomas’ name. Instead of pinning it to his lapel though, she took a step back and let him have it.

“You told me things I wanted to hear, but what I learned about you tonight is you’re selfish, unkind and a liar,” the no-nonsense Bachelorette snapped. “Your Bachelor audition ends tonight, so get out.”

Katie’s speech drew smiles from the men, who weren’t aware of the new drama about to unfold because, in the end, Katie granted Blake’s request to let him join the competition for her heart.

Here are the men remaining after Monday night:

–Aaron, 26, an insurance agent from San Diego, California–Andrew M., 31, a deputy district attorney from Newport Beach, California–Andrew S., 26, a pro football player from Vienna, Austria–Brendan, 26, a firefighter trainee from Toronto, Ontario, Canada–Blake, 29, a wildlife manager from Hamilton, Ontario, Canada–Connor B., 29, a math teacher from Nashville, Tennessee–Greg, 27, a marketing sales rep from Edison, New Jersey–Hunter, 34, a software strategist from Houston, Texas–James, 30, a software salesman from La Jolla, California–Josh, 25, an IT consultant from Miami, Florida–Justin, 26, an investment sales consultant from Baltimore, Maryland–Michael, 36, a business owner from Akron, Ohio–Mike, 31, a gym owner from San Diego, California–Quartney, 26, a nutrition entrepreneur from Dallas, Texas–Tre, 26, a software engineer from Covington, Georgia