John Langley, a creator of “Cops,” the stark-looking reality television crime series that followed police officers on drug busts, domestic disputes and high-speed chases for more than 30 years, died on Saturday in Baja, Mexico. He was 78.

Mr. Langley apparently had a heart attack while driving with a navigator in the Ensenada San Felipe 250 Coast to Coast off-road race, said Pam Golum, the spokeswoman for Langley Productions.

“Cops,” which made its debut on Fox in 1989 and ran until last year, documented misdemeanors and felonies through the lenses of hand-held video cameras, its stories told without narration or music except for its reggae theme song, “Bad Boys.”

From the start the show, created with Malcolm Barbour, was supposed to be an unbiased look at law enforcement, and Mr. Langley later saw it as a truer expression of reality TV than series that followed it, like “Survivor.”

“You can be entertained by it, you can be disgusted, but it is what happened,” he told The New York Times in 2007. “It wasn’t staged, it wasn’t scripted. I didn’t put anyone on an island and tell them what to do.”

Each episode told a different story shot by a crew embedded with one of various police departments. A drug sting at a pain management clinic. A Taser used to subdue a man called Lion. A woman found in a car with warrants for terroristic threats. A car pursuit into the woods. A man arrested in a car with fake license plates while holding 20 grams of crystal meth.

Reviewing the first episode for The Times, John J. O’Connor wrote: “For purposes of the show, however, the court of law is the video camera, which is kept running even when the trapped suspect protests its presence. We are reminded several times that ‘this program shows an unpleasant reality’ and that ‘viewer discretion is advised.’ That should keep them from switching to another channel.”

“Cops” began in Broward County, Fla., where in 1986 Mr. Langley and Mr. Barbour got the local police to cooperate in a nationally syndicated documentary, “American Vice: The Doping of a Nation,” hosted by Geraldo Rivera, who was also the executive producer.

Mr. Langley recalled in a Television Academy interview in 2009 that the Broward County episodes became part of his successful pitch to other police departments.

“We’re not the news,” he said he told them. “We’re not here to expose your department or look for dirt, but to show how difficult your job is on an everyday basis.” 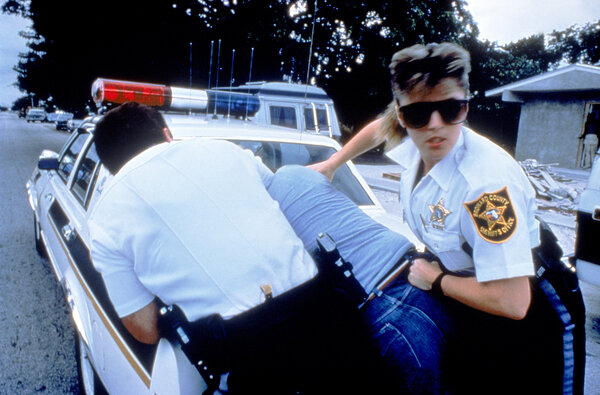 “I was sick and tired of seeing police officers portrayed in TV shows and movies as Dirty Harry and ‘Miami Vice,’ and just out there killing and maiming and doing extravagant things,” Mr. Navarro told The Miami Herald in 1999.

In 2013, after Fox had aired several hundred episodes, a civil rights group, Color of Change, mounted a campaign to cancel “Cops.” The group said that the show’s producers and advertisers had built “a model around distorted and dehumanizing portrayals of Black Americans and the criminal justice system” and had created a reality “where the police are always competent, crime-solving heroes and where the bad boys always get caught.”

In the Academy interview four years earlier, Mr. Langley addressed criticism about race in “Cops” by saying that while 60 to 70 percent of street crime was “caused by people of color,” he had made sure that most of the criminals seen on the show were white, to avoid “negative stereotyping,” he said, and because most of the show’s audience was white.

Fox did cancel “Cops,” but it was swiftly resuscitated by Spike TV (now the Paramount Network). Last year, however, amid protests over the police murder of George Floyd in Minneapolis and calls for criminal justice reform and police accountability, Paramount dropped the show.

John Russell Langley Jr. was born on June 1, 1943, in Oklahoma City and moved to Los Angeles with his family when he was a baby. His father was an oil wildcatter. His mother, Lurleen (Fox) Langley, was a homemaker.

After serving in Army intelligence in the early 1960s — he was in Panama during the Cuban missile crisis — Mr. Langley earned bachelor’s and master’s degrees in English literature from California State University, Dominguez Hills, and studied for a Ph.D. in the philosophy of aesthetics at the University of California, Irvine, but did not complete his degree.

He worked in marketing for Northwest Airlines, wrote short stories and a screenplay, and had a job with a company — where he met Mr. Barbour — that produced press kits and posters for movies. Forming their own company, the two men directed “Cocaine Blues” (1983), a documentary about the perils of cocaine abuse, which led them to make an antidrug music video, “Stop the Madness,” for Ronald Reagan’s White House in 1985. (Mr. Barbour retired from producing in 1994.)

Mr. Langley produced several other documentaries, some with Mr. Rivera, while trying to pitch “Cops” to NBC, CBS and ABC, all of which rejected the idea. But Fox ordered a pilot.

“Barry Diller watched it and said: ‘God, that’s powerful, too powerful,’” Mr. Langley said in the Academy interview, referring to a meeting with the Fox chairman at the time. Another executive worried that Fox’s stations would not accept such a raw program. (Mr. Langley had left in a lot of blood and guts, he said, knowing he could cut it.) But Rupert Murdoch, whose company controls Fox, said, “Order four episodes.”

Mr. Langley was a producer of feature films as well, including Antoine Fuqua’s “Brooklyn’s Finest” and Tim Blake Nelson’s “Leaves of Grass,” both released in 2009.

In addition to his son, Mr. Langley is survived by his wife, Maggie (Foster) Langley; their daughter, Sarah Langley Dews; another son, Zak, who is the senior vice president of music at Langley Productions; a daughter, Jennifer Blair, from a previous marriage to Judith Knudson, which ended in divorce, and seven grandchildren.

Mr. Langley understood the power of a police department’s cooperation when, while shooting “American Vice,” he asked the Broward police if he could shoot a drug raid live.

“I said, ‘If you’re going to do this bust anyway, can you do it on this date, and maybe do it in this two-hour window?’” he told the Television Academy. “They said, ‘Yeah, sure,’ and that’s how we did it.”