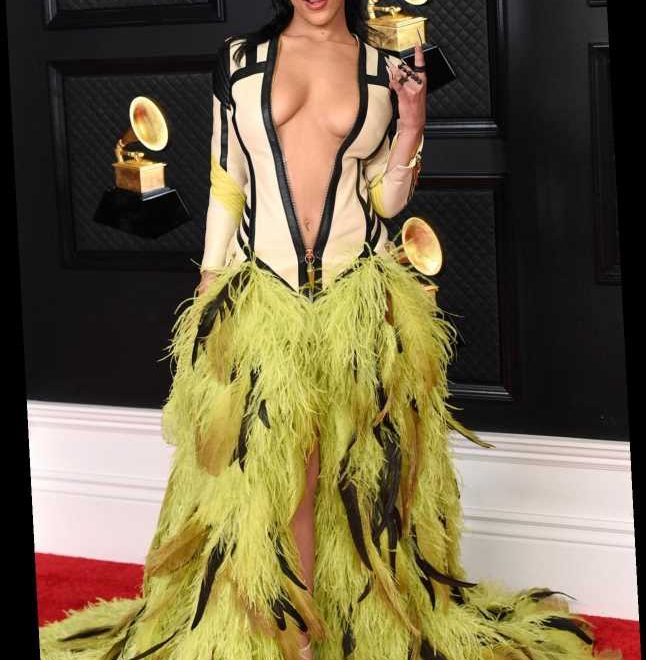 Doja Cat didn't hold back for her first Grammys!

The "Say So" singer wowed on the red carpet with in a jaw-dropping gown Roberto Cavalli gown, which featured feathers, leather and showed off a whole lot of skin.

The top of the dress — a cream and black leather motorcycle jacket adorned with gold zippers and embellishments — featured a plunging zipper that bared the front of her torso all the way down to her navel.

Adding some color to the look, the fitted leather top flowed into a billowing skirt of neon green and black feathers.

RELATED: See All of the Stars Arriving on the Grammys 2021 Red Carpet

"I'm just really excited about this because I like something that's like kind of out there," she said of the look during the Live from E!: Grammy Awards pre-show. "I feel like I've been pretty toned down lately, but this is like something I've always wanted to do."

The artist said it didn't take long to pick her outfit for the show. After laying her eyes on the eclectic dress, she knew it was the one for her.

"There's a couple things that I saw and I was like 'Maybe not that' and then I saw this and there's this little detail on the jacket that's a cat claw, and I feel like that is…what I want — like this is what I want to be," she said.

Doja's hair and makeup was just as daring. Her makeup artist Ernesto Casillas told PEOPLE that they both wanted to embrace the edginess of the dress and push boundaries with her look.

"When we saw the gorgeous custom Cavalli gown, we collectively all agreed that the glam would have an edge to it," he said. "We wanted an element of rock and roll, and since it's the Grammys, it's not a time to play it safe."

He added, "Doja is a creative person and always collaborates with [Jared Henderson] her hairstylist and I on the look. Her makeup was directly inspired by the beautiful hair that Jay styled for her. I knew I wanted it to be super intense and smoky, a little bit grungy."

Doja Cat is nominated for three Grammy Awards tonight, including best new artist. Her hit song "Say So" is also nominated for record of the year, and best pop solo performance.

Check out PEOPLE's full Grammys coverage to get the latest news on music's biggest night.