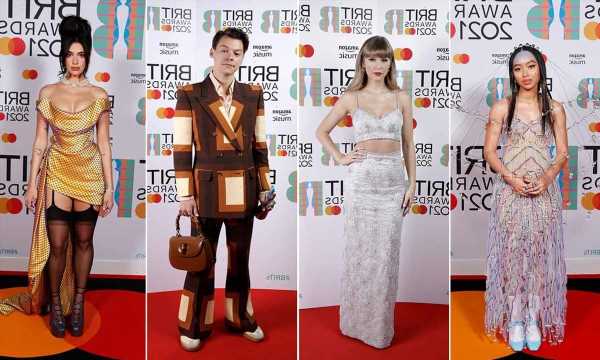 WATCH: The very best highlights from the BRIT Awards 2021

Red carpet fashion was back with a bang on Tuesday night as a host of celebrities descended upon London’s O2 Arena for the BRIT Awards 2021.

The 44th annual event, which was originally due to take place in February, was certainly worth the wait, with the likes of Dua Lipa and Pink performing to a packed live audience for the first time in over a year.

Little Mix‘s Perrie Edwards and Leigh-Anne Pinnock both showed off their baby bumps on the red carpet.

11,000 lucky guests were in the crowd, including 2,500 frontline workers, after presenting negative COVID-19 tests at the doors.

We’ve rounded up the most memorable red carpet looks of the night here, so keep scrolling for all the glitz and glamour…

No awards show would be complete without Harry Styles stealing the show in a stellar outfit. The former One Direction star donned a stylish 1970s look for the occasion, wearing head to toe Gucci for his retro ensemble – including an eviable patchwork suit, bamboo handle purse and relaxed white trainers.

Taylor Swift looked elegant as ever in a dazzling Miu Miu co-ord consisting of a glitzy bralette and floor-length column skirt. The star gracefully accepted her award as a Brits Global Icon with a speech that acknowledged her achievement of becoming both the first woman and non-British recipient of the prize.

Billy Porter came to slay, as he channelled Grace Jones in a monochromatic black ensemble. The ThreeASFour black satin dress was completed with lace sleeves paired with matching black and lace pants.

MORE: Billy Porter hits the Brit Awards in a showstopping look you need to see

The ladies of Little Mix were all angels in white, as they wore similar gowns to the event.

Meanwhile, pregnant Leigh-Anne went with a sheer gown that was captivating with a unique pattern.

Rounding out the trio, Jade opted for an equally white stunning gown that showed off her neckline.

Celeste threw her look back to the roaring 20s and resembled a flapper with her hair all done up with a feather headdress. It wasn't just her head that had feathers, as her look was a black feather creation, held to her body by two black and white straps. The singer also styled out some killer red heels with black tights.

Dua Lipa paid homage to the late Amy Winehouse with her BRITs look, channelling the British music icon with her towering beehive.

The stunning strapless Vivienne Westwood minidress that just extended past her thighs. The eye-catching look also featured a magnificent train behind it, styled out with knee-high stockings and dramatic black-heeled platforms.

Backstage host Maya Jama looked beautiful in a black outfit that featured several glistening jewels. The look would ordinarily have bared Maya's midriff, but this was covered by a host of glittering diamonds. The bottom of her look was similarly encrusted with these diamonds, as she showed off some incredible legs.

Rina Sawayama came in a sensational lavender tulle gown that commanded attention. The dress also featured two huge frills, one of which ran up the singer's neck, almost touching the top of her forehead. The star didn't lavish herself in jewels, but did wear a pair of earrings.

Clara Amfo also had hosting duties backstage and she looked equally as glamorous. The former Strictly star looked like she was still on the show with a silver sequined number and then a suit jacket over the top. The jacket also had four huge glittering diamonds dotted around.

One of the most eye-catching looks came from Griff, who styled an iconic multicoloured fringe gown, which was topped off with a diamond encrusted headwear that covered her the top half of her body like an umbrella. The singer also coloured the top of her forehead blue, which matched up with her baby blue heels.

RELATED: 14 show-stopping BAFTAs outfits that will leave you speechless