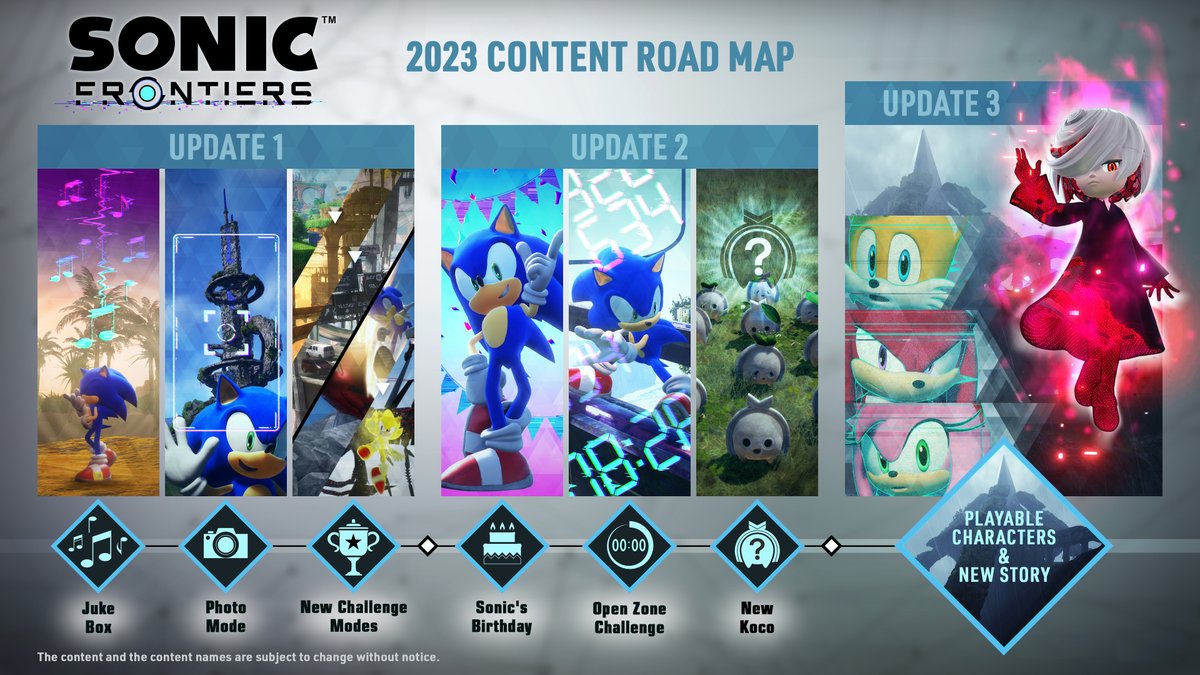 Sonic Frontiers is getting three DLC updates in 2023, featuring a bunch of new content.

Sega has announced what’s coming to Sonic Frontiers in 2023, by revealing a content roadmap for the game featuring three, free DLC updates.

From more playable characters to new modes, the game is getting a lot of new content, only weeks after director Morio Kishimoto admitted that it has ‘a long way to go’.

It’s not been confirmed yet, when any of the DLC will arrive, but the first update will include a jukebox feature, which presumably means a lot more new, and probably retro, tunes for the game.

There will also be a photo mode and several new challenge modes for you to tackle, although Sega hasn’t gone into any real detail on any of them.

The second update will celebrate Sonic The Hedgehog’s birthday, which is June 23, which is likely a hint as to when the DLC package will go live.

More open zone challenges will also get added to the game, as well as new Koco, which you’ll be then able to deliver to the Elder Koco and either increase your speed or maximum ring count.

The third update, which looks like it’s going to be a big one, will feature new story missions with new playable characters.

The image posted by Sega shows Tails, Knuckles, and Amy, but it’s not officially confirmed if they’re going to be the ones actually joining Sonic.

Before all these changes start hitting Sonic Frontiers, there’s another surprise for you, just in time for Christmas celebrations.

Sega has also confirmed that you’ll be able to get into the festive spirit by dressing Sonic in a Holiday Cheer Suit starting December 21.

A lot of players were particularly excited about the new characters, with one person saying that it’s been ‘a very long time’ since they’ve been waiting for it. The game only came out next month but they likely mean the chance to play as Sonic’s friends.

Another player even went as far as to tweet ‘I love you’ to Sega, so it some fans are not only happy with the game but eager for more.

I beg your pardon?…. WE’RE GOING TO HAVE OTHER SONIC CHARACTERS TO BE PLAYABLE IN A PRETTY SONIC GAME AGAIN?👀

FINALLY! IT’S BEEN A VERY LONG TIME THAT WE’VE BEEN ASKING FOR THIS!👏👏 pic.twitter.com/MagqYarX7G

THIS IS ACTUALLY THE BEST 3D SONIC GAME

AND YOU GUYS ARE UPDATING IT TO MAKE IT EVEN BETTER???????