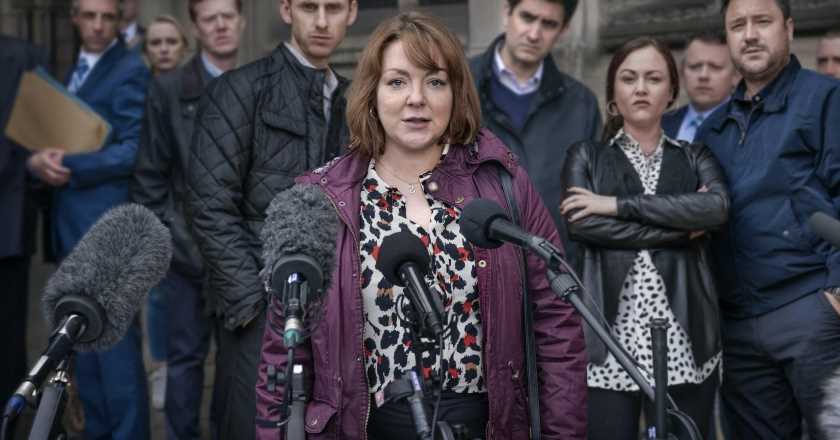 If you’re a fan of BBC television dramas, it won’t have escaped your notice that we’re currently in a golden era of small screen content. From Claire Foy’s A Very British Scandal and Jamie Dornan’s outback thriller The Tourist, to the upcoming release of Sian Clifford’s compelling new series Life After Life, you can always rest assured that come 9pm, you can sit down, switch on the telly, and find a programme with plenty of twists up its sleeve.

The BBC’s latest true crime drama, Four Lives, is no different. The chilling three-part series, based on the murders of four young men by serial killer and rapist Stephen Port (played by Stephen Merchant), explores the stories of the victims’ families and loved ones as they fight for justice amid a flawed police investigation.

Four Lives: the BBC’s new drama tells the true story of how four men’s lives were taken by Stephen Port and the fight for justice mounted by their families and loved ones.

Port, who is currently serving life behind bars, lured Anthony Walgate, 23, Gabriel Kovari, 22, Daniel Whitworth, 21, and Jack Taylor, 25, to his home in Barking between June 2014 and September 2015 after making contact with them on gay and bisexual dating apps such as Grindr. He then spiked them with lethal doses of the drug GHB, raped and killed them, and finally disposed of their bodies outside his flat or in a nearby graveyard.

The series, which airs its final episode tonight, has been widely praised by viewers for its victim-focused narrative, powerful storytelling, and chilling performance from Stephen Merchant.

Sheridan Smith, who plays bereaved mother Sarah Sak, has also been lauded for her true-to-life performance. While the series focuses on the families and loved ones of all four victims, it it undoubtedly Smith who drives the drama forward with her curiosity, rage and heart-wrenching grief as she fights to uncover the truth of what happened to her son Anthony Walgate, a fashion student from Hull, who became Port’s first victim.

From the moment she receives the news of her son’s tragic death, Sak is relentless in her enquiries. We see her chasing the DI of Barking and Dagenham police about retrieving her son’s body, speaking to Anthony’s close friend about his last confirmed movements, and finding her son’s profile on the dating app that he used to meet Port two days before he died.

Later on, in the face of continued police incompetence, Sak is the one who first connects the dots between the murders. She suggests to the family liaison officer that Anthony has been murdered, and voices her suspicions about the similarities between her son’s case and that of a new victim.

When the family liaison officer finally rings Sak with the long-awaited toxicology results, she reiterates her belief that her son was drugged and murdered, as opposed to dying from an overdose, as Port falsely suggests. She also raises the fact that the bodies of two other young men have since been found in the same area since he died.

The police dealing with the investigation, of course, overlook many key details and witnesses who come forward with crucial evidence. At the heart of it all is Sak, whose anguish and rage represent a ticking time-bomb throughout the series.

“I feel like I’m going mad,” she finally explodes in the second episode. “Either I’m right and Anthony’s been murdered, or they’re right and I’m fucking crackers.”

After being told repeatedly that there is nothing to link Anthony’s death to the other young men who have been murdered, Sak is finally vindicated when Port is arrested on suspicion of murder. During a highly-charged trial, in which the jury is initially unable to reach a verdict on what happened to Anthony, Port is eventually found guilty of murder.

Four Lives: the families of the victims listen as Port gives evidence during the trial in the series finale

Sak then delivers a searing speech outside court articulating the heartache endured by the victims’ families. Crucially, she also points out that it isn’t just Port who inflicted tragedy upon them – it was the police, too, who repeatedly failed to uphold the law and keep the young men safe from harm.

“I just wanna say this,” she begins. “That Port being convicted is only half the story. The other half is the police. This case has been a disaster. I don’t know why, because I only know my part of the story, but whether it’s out of laziness or homophobia, or lousy management, cutbacks – maybe a combination of all of those, we’ll have to see – but lads have been robbed of their lives and families left devastated.

“If this is what policing is like in this country then it’s broken, it’s totally fucked,” she continues. “And somebody needs to sort it out. That’s all.”

Sak’s speech is a sobering reminder that accountability has been sorely lacking in this scandal. Following Port’s conviction, the Independent Police Complaints Commission opened an investigation into whether 17 police officers should face disciplinary action.

According to a postscript at the end of the final episode, however, none of the officers involved in any of the investigations has been formally disciplined, and five have since been promoted.

Meanwhile, in December 2021, inquests into the deaths of the four men ruled that ‘fundamental failings’ by the Metropolitan Police ‘probably contributed to three of the four deaths’.

The postscript adds that the families said the case should go on record as ‘one of the most widespread institutional failures in modern history’ and that the Metropolitan Police’s actions were, in part, ‘driven by homophobia’ – something which the police deny.

Four Lives: The families and loved ones of the victims gather outside the court during the series finale

Sak, who has written an upcoming book, A Life Stolen: The Tragic True Story Of My Son’s Murder, exploring the death of her son, has also continually called for accountability from the police.

“I just think now the police have all just got away with it all,” she told LondonWorld. “Quite a few of them have been promoted since all this.

“It can’t just be brushed under the carpet when the show’s finished and it’s all died down and everybody forgets about it. Because it’ll just keep happening if not.”

With the release of Four Lives, there is hope that the spotlight on the terrible injustices faced by Sak and the families of Port’s victims will go some way in holding power to account.

All three episodes of Four Lives are available to stream on BBC iPlayer.