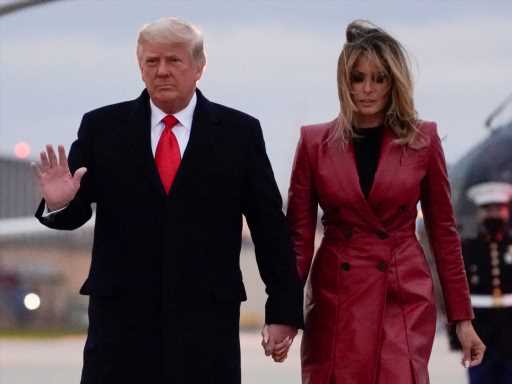 Like Chrissy Teigen accidentally ordering a $13,000 bottle of wine, most aspects of Melania Trump’s life are not really relatable at all. She travels in private jets, never met a military-style dress she didn’t love, and has been married to Donald Trump since 2005. She’s an enigmatic figure whose silence has gone far in obfuscating the extent to which she’s supported her husband’s goals. But Melania does have one feeling to which we can relate: a wave of relief that comes from her husband Donald no longer having access to his Twitter account. According to former campaign manager Jason Miller, Melania has noticed a big change in Donald since his access to the platform was revoked.

Miller told the Sunday Times that the former POTUS and FLOTUS have both found benefits to Donald’s newfound ban from the social media site.

“He’s said that not being on social media, and not being subject to the hateful echo chamber that social media too frequently becomes, has actually been good,” he shared, per the Independent. “That’s something the first lady has backed up as well. She has said she loves it, that he’s much happier and is enjoying himself much more.”

Given the rate at which Donald was known for tweeting, we can imagine this created quite the change to his daily schedule and, as Melania notes, his presence on any given day.

Miller says that Donald is finally “able to exhale, knowing that it’s not all on you for the first time in four years.” It seems Melania — and the rest of us — have shared in that exhale too.

Before you go, click here to see quotes that prove Melania Trump is a lot like her husband.