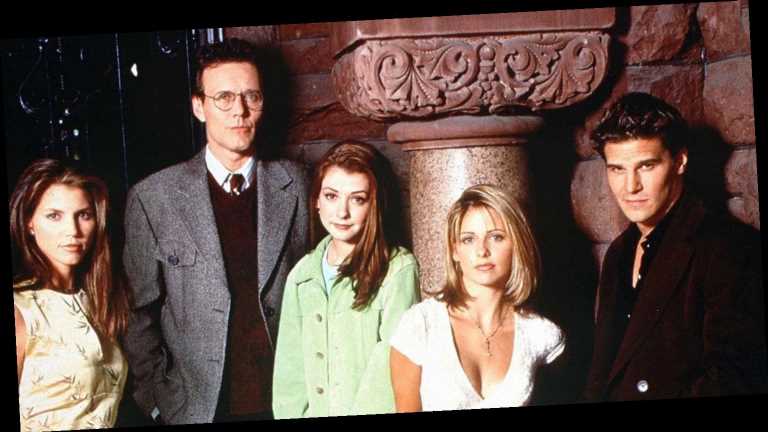 The series, created by Joss Whedon (Justice League and Avengers: Age of Ultron), is based on the 1992 film of the same name. It ran for seven seasons on The WB from 1997 to 2003. The show’s popularity led to the spinoff titled Angel, in which Boreanaz starred as the series lead.

Speaking to The Huffington Post in 2013, Hannigan opened up about how honored she was to be a part of the pop culture shift. “I was so grateful to have been a part of such a wonderful relationship,” the American Pie actress explained. “The people that it’s touched that I’ve met … it’s such a gift to have been able to do that.”

Despite the show’s legacy, a reboot or revival isn’t necessarily in the cards. In an interview with Parade, Gellar previously addressed the likelihood of the series being revisited.

“There’s a time and a place for everything and when something is done really, really well, you don’t have to reboot it, because it still holds up,” she explained in October 2019. “And so I think that’s what I struggle with a little bit. People discover Buffy today and love it just the same as if they discovered it 20 years ago. There are movies I watch, like Sixteen Candles, I love it just as much today as I did then. Why would I want to see it redone? So I am probably in the minority on that.”

The Cruel Intentions star added, “That being said, go reboot it if you have a new way to tell the story with new people, and bring other people that maybe haven’t seen it. In the end, I believe it will only bring more viewers to the original. And how much better the original is.”

In February 2021, Charisma Carpenter, who played Cordelia Chase on Buffy and its spinoff, Angel, accused Whedon of creating a toxic work environment on the set of both shows.

“For nearly two decades, I have held my tongue and even made excuses for certain events that traumatize me to this day,” Carpenter wrote via Instagram. “Joss Whedon abused his power on numerous occasions while working on the sets of Buffy the Vampire Slayer and Angel. While he found his misconduct amusing, it only served to intensify my performance anxiety, disempower me, and alienate me from my peers. The disturbing incidents triggered a chronic physical condition from which I still suffer. It is with a beating, heavy heart that I say I coped in isolation and, at times, destructively. … Joss has a history of being casually cruel. He has created hostile and toxic work environments since his early career. I know because I experienced it first-hand. Repeatedly.”

Carpenter went on to allege that Whedon was “mean and biting and disparaging about others openly, and often played favorites, putting people against one another to compete and vie for his attention and approval.” She also claimed he called her “fat” when she was pregnant with son Donovan, adding she was ordered to work “long and physically demanding days” during her pregnancy.

While Whedon has yet to address the accusations, Gellar spoke out via Instagram.

“While I am proud to have my name associated with Buffy Summers, I don’t want to be forever associated with the name Joss Whedon,” she wrote at the time. ”I am more focused on raising my family and surviving a pandemic currently so I will not be making any further statements. At this time, but I stand with all survivors of abuse and I’m proud of them for speaking out.”

Scroll down to see what the cast has been up to since the series ended: