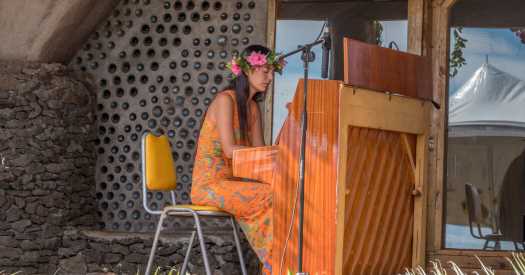 From her home, halfway up the highest hill on Rapa Nui, Mahani Teave was describing the power of nature there to overwhelm.

“On one side, I have an almost 180-degree view of the ocean,” she said in a recent interview. “A big fog is coming in from the hill on the other side.”

The profusion of stars gives the black of the sky a seemingly “papier-mâché texture,” she said. When the sounds of crickets cease, profound silence completes “a stunning experience for the senses.”

Teave, 38, learned to appreciate such stirring encounters while growing up on Rapa Nui — also known as Easter Island, the name imposed by European interlopers in 1722. From there, one of the remotest inhabited islands on the planet, this pianist went on to earn a place on the international concert stage. But rather than press on with a career of incessant touring, and quite possibly the only professional classical performer to emerge from Rapa Nui to date, she decided to return and establish the first music school on the small island nearly a decade ago.

It was at Teave’s island school that the Seattle-based musician, rare string instrument collector and arts patron David Fulton had a chance encounter with her as part of a world cruise with his wife in the spring of 2018.

“After we had visited the moai” — the monolithic statues of revered ancestors that symbolize Rapa Nui — “we were taken to the school to hear a performance,” Fulton said. “The kids had flowers in their hair and used the back porch of the school as a stage.”

Then Teave began playing on a wobbly upright piano. “It was so moving and unexpected, even surreal,” Fulton said. “She played a serious program. I thought: This is not a good pianist; this is one of the world’s greatest pianists.”

Fulton was shocked to discover that Teave had never released a recording. He invited her to Seattle to put down some of her favorite repertoire at Benaroya Hall, engaging the Grammy Award-winning engineer Dmitriy Lipay, who works with the Seattle Symphony and the Los Angeles Philharmonic.

Lipay recalls that he was concerned about whether there would be sufficient studio time for the challenging program Teave had conceived — Bach, Liszt, Handel, Scriabin, Chopin and Rachmaninoff — with a musician who had never before recorded in the studio. “With Mahani we were in for a big surprise,” he said. “The recording process with her was very similar to the golden years, when artists were willing and able to give a complete performance in one take.”

Forsen, with whom Fulton had collaborated on four previous films, was asked to tape the recording sessions. As they learned more of Teave’s story, they realized it merited a full documentary. 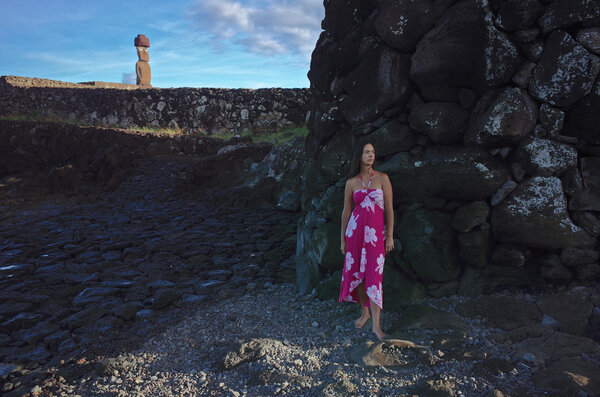 Teave’s first exposure to the classical repertory came from an itinerant ballet teacher, and for years her favorite work was “The Nutcracker,” which she listened to incessantly on a cassette, practicing her steps at home.

“There were no classical radio stations on the island when I was a little girl,” she said. “Nobody even knew about classical music, except for tidbits they might catch from some movie.”

When a retired violinist later settled temporarily on the island, bringing along a piano, Teave became fascinated by the instrument and persuaded the woman to give her lessons. Teave also wrote to the Chilean pianist Roberto Bravo, pleading with him to visit Rapa Nui. He did, and invited her to make her public debut; she was 9. On his advice, Teave’s mother, an American who had settled on the island and married a native of Rapa Nui, took her daughter to Valdivia, in the south of Chile, to study at the conservatory.

She went on to teachers in Cleveland and Berlin, a city where she felt especially at home and which became her base for almost four years.

“There’s a respect there for history, for lessons learned, that’s very much like being on the island,” she said.

Her decision to return to Rapa Nui after launching a potentially stellar career was part of a slow process. Teave said she felt she had devoted “the right amount of time” to each stage of her formation up to that point — “like a musical phrasing.”

“A little door opened and I decided to go through it because nobody else will,” she added. “I realized we need a school, and I am the tool of this universe to do what has to be done at this moment.”

With Enrique Icka, a construction engineer with a parallel career performing traditional music who sings on one of the album’s tracks, Teave founded a school for music and the arts. They named it Toki, the Rapa Nui word for “tool” — the same word that denotes the objects used to carve the mysterious moai statues.

“It’s a very symbolic word,” she said, “because we believe the present carves the future.”

That vision extends to social concerns and the environment. Toki is self-sustainable, using rainwater collectors and solar panels. The building was constructed from recycled tires and the glass and plastic bottles left behind by hordes of tourists. Teave conceives of it as a kind of reversal of the traditional pattern of colonialist exploitation. She believes the school — and Rapa Nui, which has already been hit by the effects of climate change — can be a model for the outside world, showing the urgency of taking action on environmental issues.

Normally about 100 students, from 2-year-olds to teenagers, study each year, enrolled in classes in both traditional Polynesian and Western classical music that meet after regular school hours. The classes were free until 2018, funded mostly through philanthropy, with supplements from Chilean government grants; the Fundación Mar Adentro; and the island’s cultural corporation. During the pandemic, the student body has dwindled to 60. Rapa Nui has been especially hard hit because of its reliance on tourism — the chief engine, along with farming, of the island’s economy. But even before 2020, a general lack of opportunities has led to high rates of alcoholism, drug abuse and domestic violence.

“If the children want to be musicians, they get the possibility to study here and later continue off the island when they are old enough,” she said. “But the others who will not pursue music as a career learn values that come just with learning an instrument. I see it as a tremendously necessary element, especially in a community which is as vulnerable as ours.”

Given the ills that historically have come from the West, did people on the island greet Teave’s interest with suspicion? “Quite the opposite,” she said. “Because of the history, everything which is brought in from outside is always looked on with great skepticism. But when it’s born from the community, it’s accepted wholeheartedly. I performed two concerts before we ever started the school, and the people were moved and so grateful.”

Teave said she would like to travel a bit more to concertize. But whenever she leaves the island, Rapa Nui remains a part of her music.

“All of these experiences are in my playing and the pieces that have accompanied my life,” she said. “Always.”