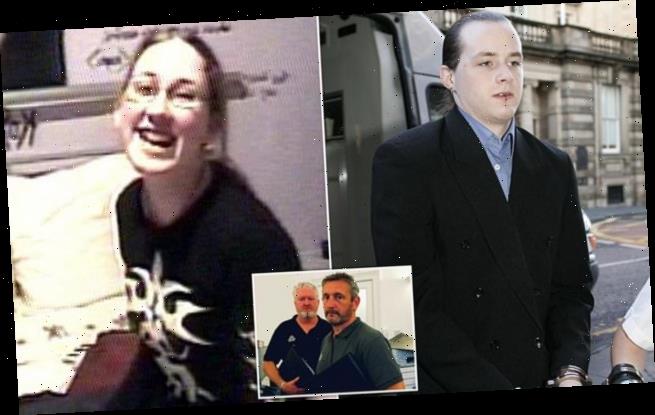 A man who was convicted as a teenager of killing his 14-year-old girlfriend insists he has been ‘locked up for a crime he didn’t commit’ in a new documentary re-examining the case.

Luke Mitchell, 32, was 16 when he was sentenced to life in prison for the murder Jodi Jones, his girlfriend of four months, who was found stabbed, stripped and bound near her home in Easthouses, Midlothian in June 2003.

Luke, who was 14 at the time of the murder, claims he was immediately singled out as the prime suspect in the case because he was the ‘local weirdo’ and has consistently denied killing Jodi.

Speaking in two-part Channel 5 documentary Murder In A Small Town, which premieres tonight, Mitchell re-states his claim that he didn’t kill Jodi and says police officers tried to force him into a confession.

Private investigators John Sallens and Michael Neil, who re-examined the case for Channel 5, agree Mitchell was treated ‘unfairly’ by police and insist that it would have been ‘physically impossible’ for him to commit the crime in the timeframe given by officers.

They also claim there is another potential suspect who should have been considered, although the individual cannot be named for legal reasons. 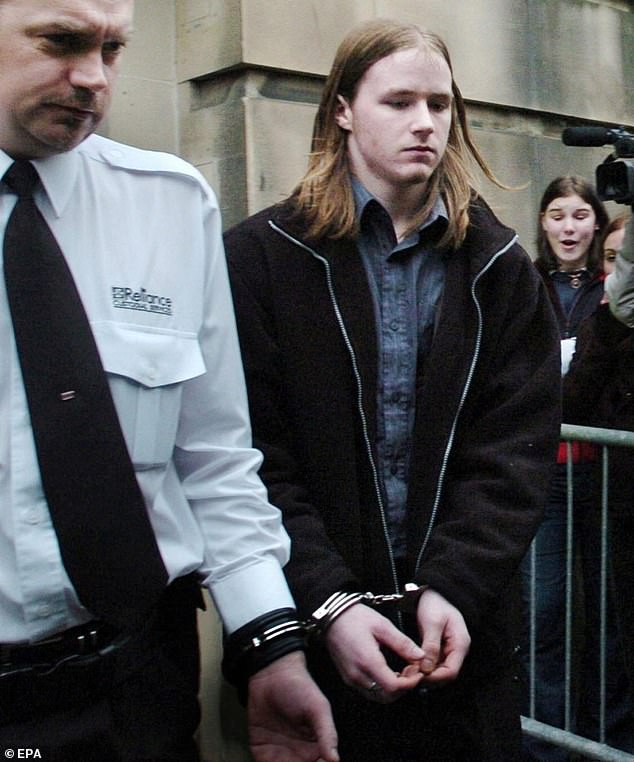 Convicted killer Luke Mitchell, who was accused of brutally killing his girlfriend of four months Jodi Jones near her home in Easthouses in June 2003 claims he is innocent in upcoming Channel 5 documentary, Murder in a Small Town, airing Wednesday at 9pm. Pictured,: Mitchell after he was sentenced to a minimum of 20 years in jail for Jodi’s murder in 2005 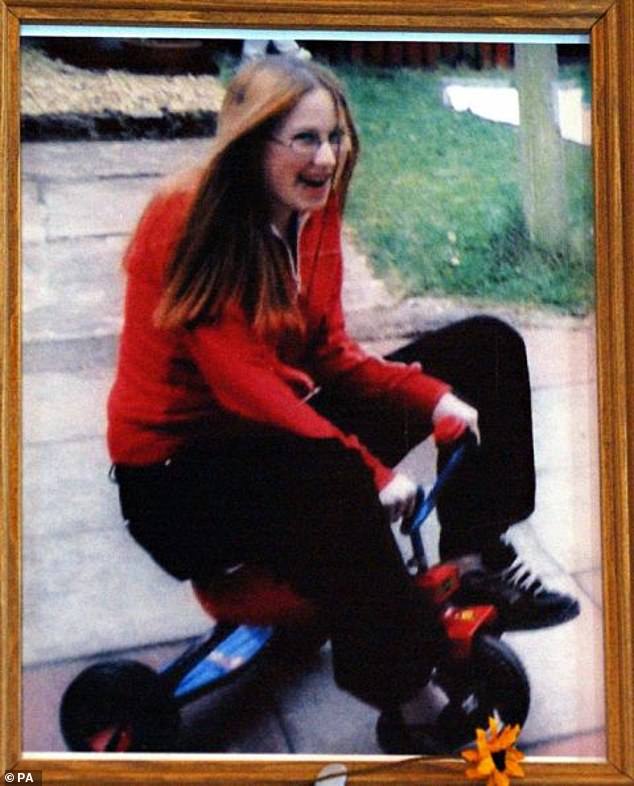 Jodi Jones, pictured, was 14 when she was brutally attacked, bound and stripped and stabbed 20 times near her home while walking to her boyfriend Mitchell’s home after school

Speaking in a phone call from prison, Mitchell says: ‘I’ve not spoken out in all this time because every time I’ve tried to I’ve been shouted down and called evil, manipulative and twisted.

‘I can’t be more clear. I absolutely did not kill Jodi and I’ve been locked up for a crime I didn’t commit. I will not admit to something I’ve not done. I want to clear my name.’

He adds it was ‘obvious’ to him that police had treated him as a suspect from day one, when he was kept separate from the rest of the search party who went out to find Jodi’s body.

Commenting on the alleged police treatment, he continues: ‘I requested to go to the toilet. I was taken there and was standing at the urinal with two very large adult males shouting at me that I was to “confess you little b*****d, just tell us what you did and we’ll make it OK”.

‘I don’t know why they went after me like this. It’s not like I had any criminal involvement with police beforehand. I was the local weirdo. It was easy to put on me.’

Mitchell was depicted as a devil worshiper at the time of the murder due to his interest in goth culture, the singer Marilyn Manson and his obsession with the murder of the Black Dahlia – an actress who was brutally murdered in Boston in 1947. 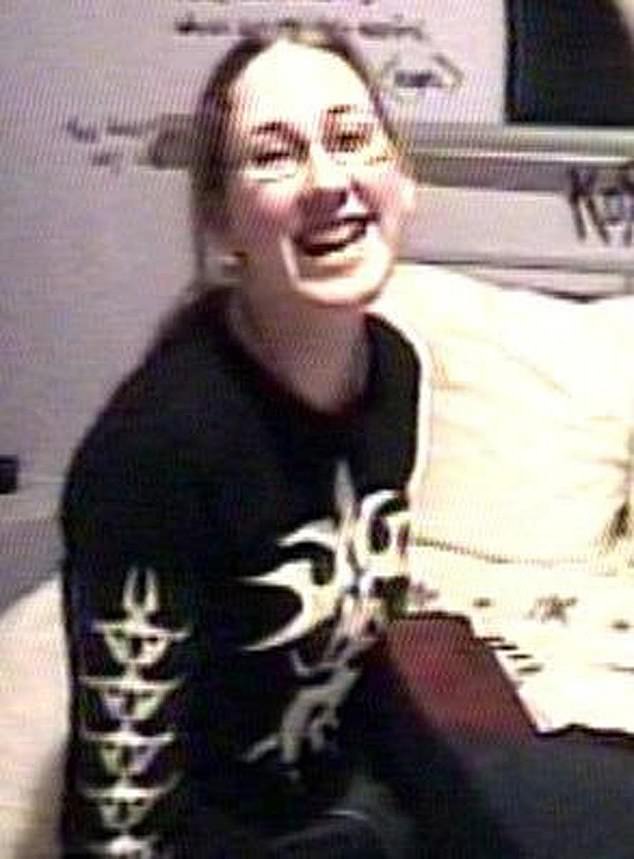 Mitchell found Jodi’s lifeless body on June 30, 2003, after she had failed to return home. The alarm had been raised at around 10pm, when her family realised she had not been seen since 5pm that same day (above: Jodi Jones) 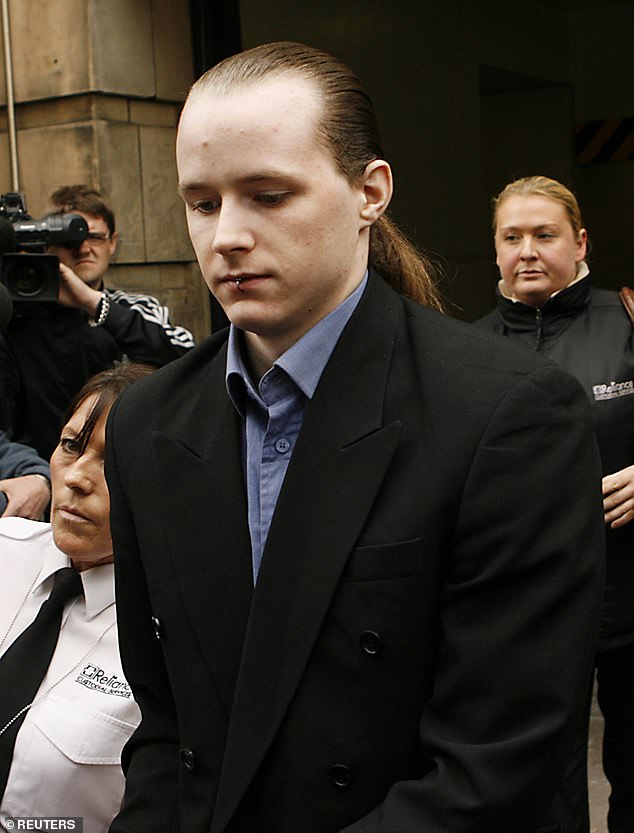 Private investigators have said police made up their mind about Mitchell early during the investigation and made the evidence fit their theory. Pictured; Mitchell being led to a prison van after his last appeal was rejected in 2008

Private investigators Sallens and Neil agree police treated Mitchell differently from the start and made him a suspect early on.

‘Mitchell was treated unfairly from the start. His statement was the only one that was tape recorded and it was marked as “suspect”,’ says Neil.

Sallens said he believed the police had ‘made their minds up’ about Mitchell and the fact he was responsible for the murder.

He continues: ‘The police have started with a conclusion and made things fit, their mindset caused them not to look at other stuff. We have a very strong suspect but for legal reasons we can’t say right now but we’ll see.’

Neil and Sallens believe there are inconsistencies in where the body was found and on how Mitchell could have washed in order to disguise some of the forensic evidence against him. 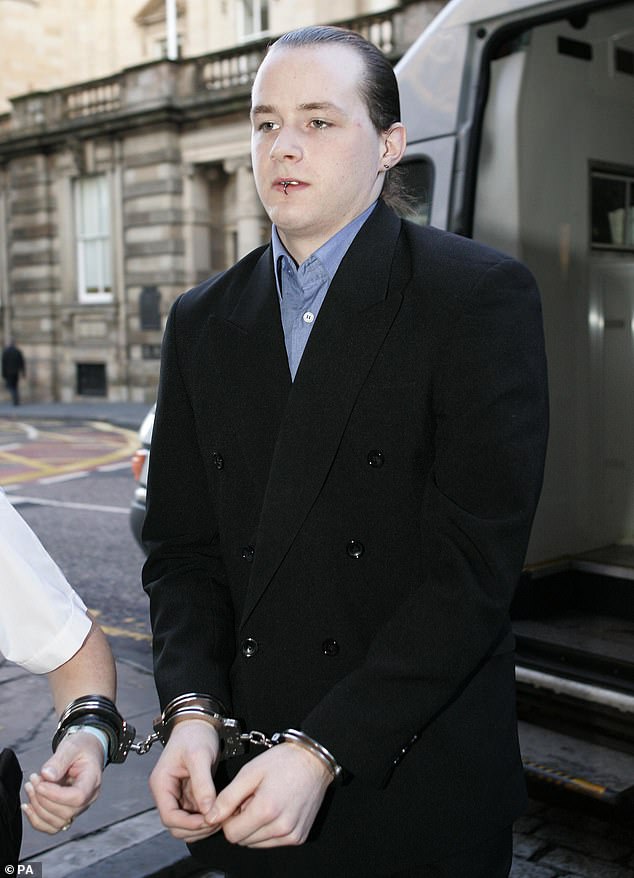 Mitchell (pictured in 2008) was arrested and charged with the crime, but pleaded not guilty during his 42-day trial at the High Court of Justiciary in Edinburgh 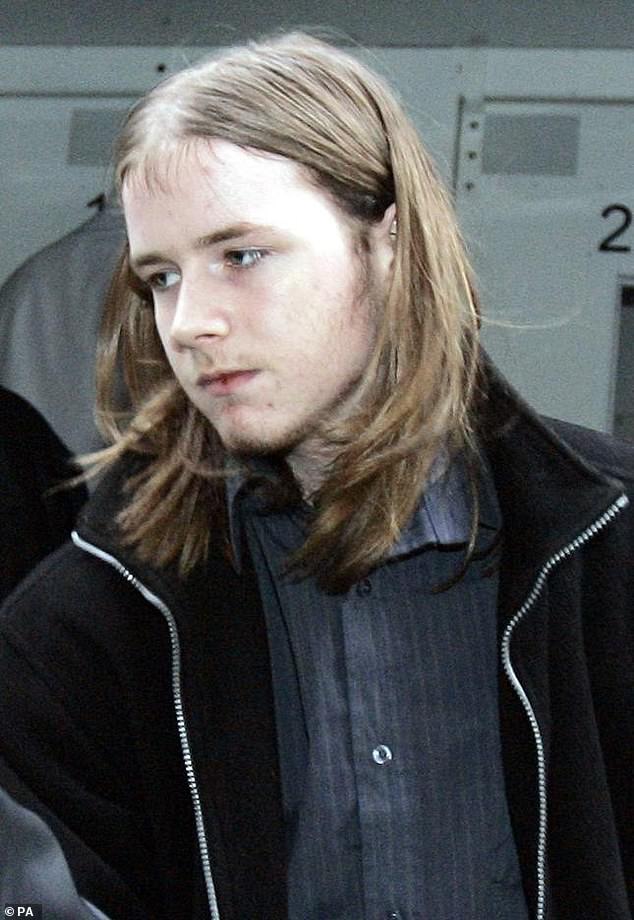 Mitchell, pictured in 2005, said he would never confess to Jodi’s murder and is still claiming his innocence from behind bars

‘The body wasn’t covered so it was open to the elements overnight,’ Sallens said.  ‘The amount of evidence you can get from a crime scene if handled properly is incredible. It would have been a bloodbath, the injuries were horrendous.

‘We think she was murdered elsewhere and dragged there. The person who murdered her would have been covered in blood.

‘For Luke Mitchell to have done it he would have had to go home, got changed and back out. But when he was examined he still had mud under his nails which meant he hadn’t washed his hands and his hair was still greasy so he hadn’t had a shower.

‘He would have made his way home covered in blood but no one saw him. This was a summer’s day. In the time frame the police gave it’s a physical impossibility for him to have committed the murder. The was no forensic evidence found on Mitchell or his house.

‘The stated the time of death as 5.15pm but that’s unsafe as the body was out all night open to the elements and the pathologist did not arrive until the next morning.

‘We know for a fact certain houses were not searched. The whole scenario was that Jodi was pulled over a wall, but there were no forensics.’

Defence lawyer John Scott QC says on the documentary that police would have been ‘under pressure’ to identify a suspect and arrest someone.

‘But it is possible to lose important lines of inquiry by developing a case theory prematurely,’ he explains. 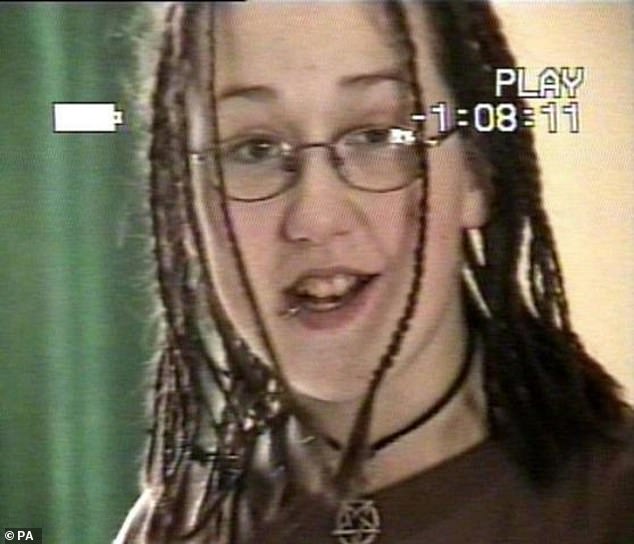 The body of Jodi Jones (pictured) was discovered in woodland near her home Dalkeith, Midlothian, after she had failed to return home 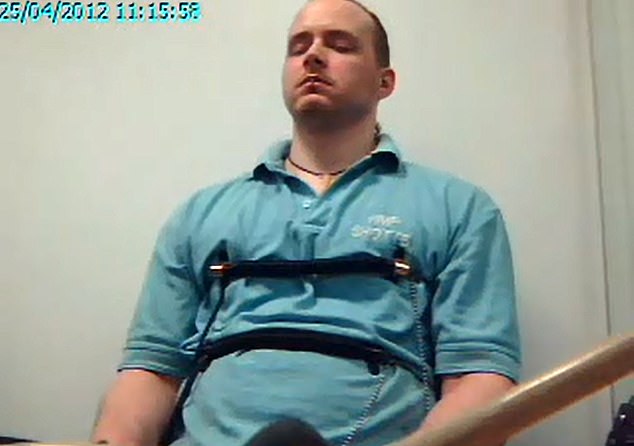 Mitchell denied his involvement in Jodi’s murder in 2013 while wired up to a lie detector machine (above) in a YouTube video. Polygraph tests have no legal validity in Scottish courts 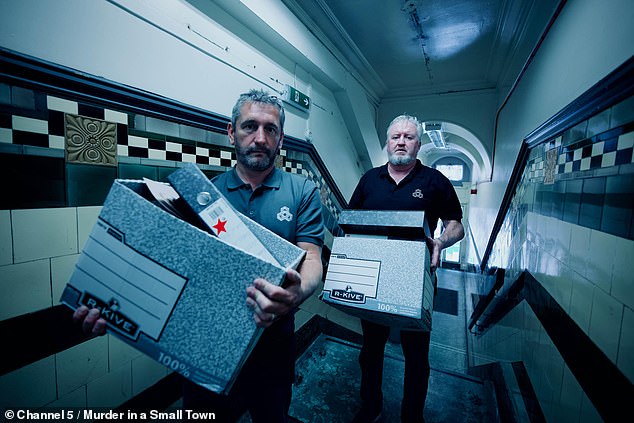 He added that important lines of inquiry could have remained uncovered if a police team were close minded about any other theory, which, he said meant that ‘to an extent the investigation becomes an inevitability in terms of where the finger points.’

Mitchell was accused of Jodi’s murder after he found her lifeless body in 2003.  The teenagers had been dating for four months, and had made plans to meet on the evening of June 30 but according to Mitchell, she never showed up.

The alarm was raised a few hours later, around 10pm, after her family realised she had not been seen since 5pm that day.

Her hands had been tied, she had been stripped and her throat was stabbed up to 20 times.

Mitchell, who found Jodi’s body, was quickly accused of her murder and was convicted ro a minimum 20 years in jail at the High Court in Edinburgh in 2005, aged 16.

His attempts to appeal the decision were rejected and he’s been serving his sentence since, with the earliest chance of release being 2025.

Murder in a Small Town airs on Wednesday and Thursday at 9pm on Channel 5.

WHAT HAPPENED IN LUKE MITCHELL’S TRIAL?

Luke Mitchell was convicted of murdering his 14-year-old girlfriend Jodi Jones in June 2003, after her body was discovered in woodland near her home Dalkeith, Midlothian.

The brutal killing saw Mitchell sentenced to 20 years in prison in 2005, when he was 16 years old.

Mitchell, who was 14 at the time of the murder, found Jodi’s lifeless body on June 30, 2003, after she had failed to return home.

The alarm had been raised at around 10pm, when her family realised she had not been seen since 5pm that same day. Jodi had set out to meet her boyfriend, but according to Mitchell, she had never shown.

Her hands had been tied, she had been stripped and her throat was stabbed up to 20 times.

The murder weapon was never found and there was no DNA evidence linking Mitchell to the crime scene.

Mitchell was arrested and charged with the crime, but pleaded not guilty during his 42-day trial at the High Court of Justiciary in Edinburgh.

During the trial, Mitchell had lodged a special defence of alibi, claiming that he was at home cooking dinner at the time of the murder.

This was later discredited during the trial, when his brother Shane said in cross examination he had been watching internet pornography in the house at that time.

On January 21, 2005, the jury found Mitchell, who was sixteen at the time, guilty after five hours of deliberation, and Mitchell was branded as ‘truly wicked’ by Judge Lord Nimmo Smith.

On February 11, 2005, Mitchell was sentenced to a minimum of 20 years in prison before being considered for parole.

Mitchell has consistently protested his innocence and has lodged several unsuccessful appeals against his conviction.

Back in 2013, he also denied his involvement in Jodi’s murder while wired up to a lie detector machine in a YouTube video filmed behind bars. But polygraph tests have no legal validity in the Scottish courts.

It was believed to be the first time a convicted criminal has ever been seen taking – and passing – a polygraph test while in prison.

In 2017, a fresh attempt to free Mitchell was also made by campaigners who believe he was wrongly jailed for the crime.