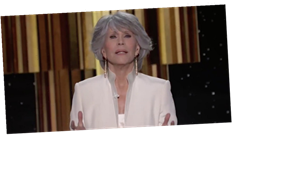 Jane Fonda was honored with the Cecil B. DeMille Award at this year’s Golden Globes for her decades-long career in entertainment. During her speech, the 83-year-old icon took the opportunity to speak out about the importance of equal representation after it was recently revealed that none of the 87 members of the Hollywood Foreign Press Association are Black.

“You know, I have seen a lot of diversity in my long life, and at times I have been challenged to understand some of the people I’ve met, but inevitably, if my heart is open and I look beneath the surface, I feel kinship,” she said. “But there’s a story we’ve been really afraid to see and hear about ourselves and this industry. The story about which voices we respect and elevate and which we tune out.” Fonda then urged viewers to “expand that tent so that everyone rises and everyone’s story has a chance to be seen and heard . . . Let’s be leaders.”