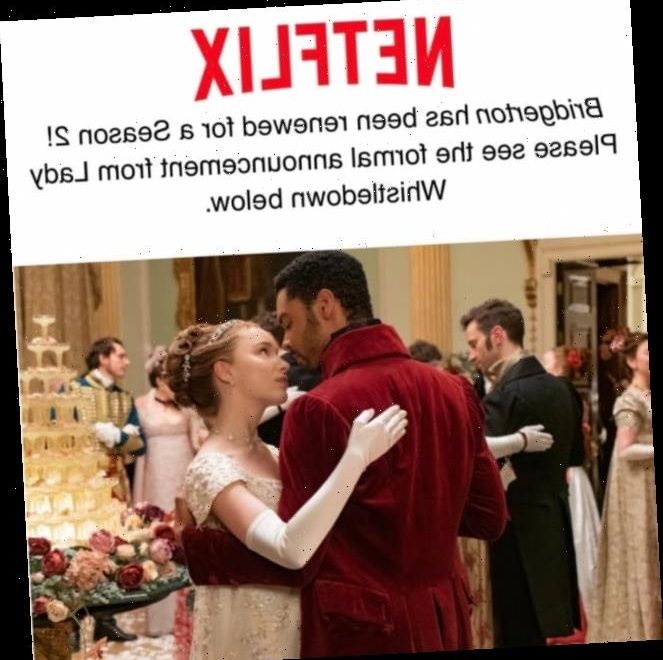 The all-knowing narrator of one of Netflix’s most recent smash hits has issued a new decree in which she passes along news both good and bad — but mostly the former.

Because Bridgerton has been renewed for Season 2!

Dearest Readers, opens the latest edition of Lady Whistledown’s Society Papers, a storytelling device at the center of this Shonda Rhimed-produced drama.

The ton are abuzz with the latest gossip, and so it is my honor to impart to you:

Bridgerton shall officially return for a second season. I do hope you have stored a bottle of ratafia for this most delightful occasion.

“The incomparable cast of Bridgerton will return to production in Spring 2021,” reads the pamphlet, meaning new episodes likely will not air until some time in 2022.

“The author has been reliable informed that Lord Anthony Bridgerton intends to dominate the social season. I will have my pen ready to report on any and all of his romantic activities.”

If Bridgerton Season 1 focused on the romantic entanglements of Phoebe Dynevor’s Daphne, it now sounds as if Season 2 wiill hone in on her brother’s possible engagement.

“However, gentle reader, before you set the comments section alight with requests for more sordid details, know that I am disinclined to report on the particulars at this time.

“Patience, after all, is a virtue.”

Bridgerton is the first series from Rhimes’ production company to air on Netfliix.

It is based on Julia Quinn’s Bridgerton book series and it takes place in the early 19th century, chronicling the adventures of mulitple wealthy families in Great Britain.

There are many fancy parties and lots of pretty fashion and also a great deal of sex.

“We have a bunch of new characters we are going to be introducing,” creator Chris Van Dusen said this morning in announcing the renewal on Today with Hoda & Jenna.

“Anthony is going to have a love interest next season, and I think it’s going to be as sweeping and moving and as beautiful as viewers of the first season have come to expect from the show.”

Based on the book on which Season 2 will be based, this love interest will be named Kate Sheffield.

Casting is underway for the key role.

Season 1 told the tale of a complicated romance between the eldest Bridgerton daughter, Daphne, played by Dynevor; and the Duke of Hastings Simon Bassett, portrayed by Regé-Jean Page.

The characters are expected back for Season 2.

However, each subsequent season of the series willl focus on a different member of the Bridgerton family; most notably his or her search for love.

Teased Van Dusen of Anthony, along with plans for Season 2:

“We left him at the end of the first season at a bit of a crossroads, so I’m looking forward to jumping in and discovering how he fares on the marriage market.”