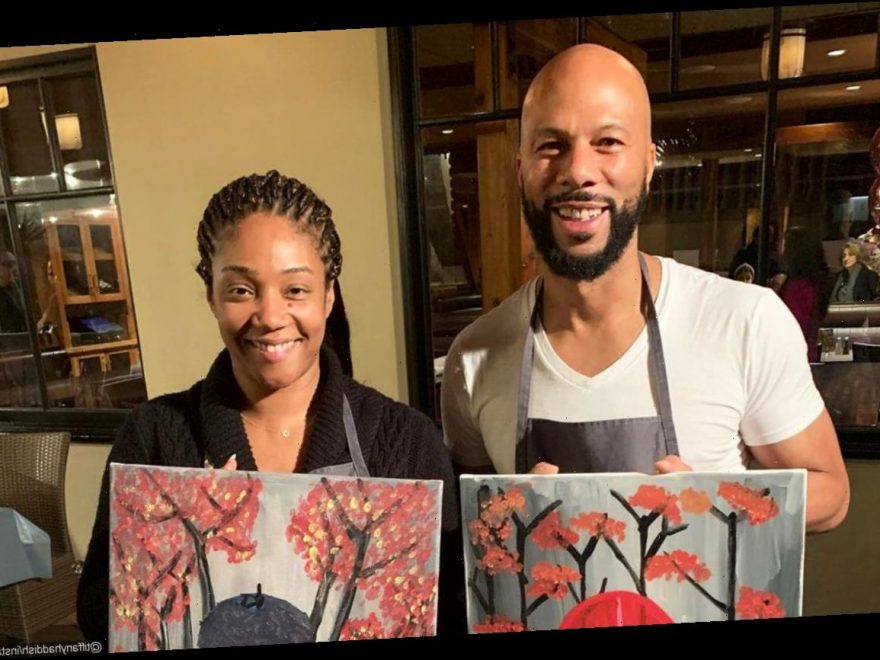 Taking part in the latest viral TikTok trend, the ‘Girl’s Trip’ actress shows off her best seductive moves with remixes of Paul Anka’s ‘Put Your Head On My Shoulder’ and Doja Cat’s ‘Streets’ playing in the background.

AceShowbiz –Tiffany Haddish and Common know how to bring a little fun into their romantic relationship. When taking part in a steamy “Silhouette Challenge” on social media, the comedienne portraying Dina in the “Girls Trip” and the “Come Close” rapper put a funny twist at the end of their version.

On Sunday, January 31, the 41-year-old actress shared a short video of her and her boyfriend participating in the viral TikTok trend. She began the clip by posing seductively in a trench coat and hair bonnet for the camera, before she took a stand in a doorway.

Once the light turned red, Tiffany flaunted her seductive moves to the remixes of Paul Anka‘s “Put Your Head On My Shoulder” and Doja Cat‘s “Streets”. Common then came into view, and the two got hot and heavy. The making out session, however, came to an abrupt end when her wig flew off. “For the Lovers #Silhouettechallenge #sheready,” she captioned the post.

The “Night School” star’s steamy video has since received comments from many. One in particular was Common himself who jokingly replied, “Who is that dude in the video?” Meanwhile, TV personality Porsha Williams gushed, “Too cute,” and actress Tasha Smith raved, “Love everything about it.”

Tiffany confirmed her romance with Common back in August 2020. When speaking to Steve-O‘s in his “Wild Ride” podcast, she confessed, “I am in a relationship.” Asked whether she is dating the rapper, she said, “Yeah, we’re twins now.”

“I’ve been talking about cutting my hair for years and when I went to the doctor it kind of solidified like, ‘Yeah I should just cut it all off.’ And he said it was beautiful,” she went on explaining. “He’s like, ‘Man, you did it. You gotta lot of courage. Like, you look so beautiful. I love it.’ I was like put your head on my head.”

Tiffany continued sharing more details of how she met Common. “I met Common when I was shooting my movie ‘The Kitchen‘. He was in it and I guess he was my love interest. I made out with him in the movie and we became friends and it wasn’t anything sexual. Our friendship was getting a little more than friendship but not quite ’cause COVID happened and we were like quarantined,” she spilled.

“So then it was like we were FaceTiming all the time and I’m like, ‘You should check out Bumble. Why don’t we do this on Bumble. We can do charities. We can do things for the frontline workers and kids, too.’ We got that money and made all these donations and it was really cool,” she added. “Then he got tested for everything and I got tested for everything and yeah, we’ve been f**kin’.”