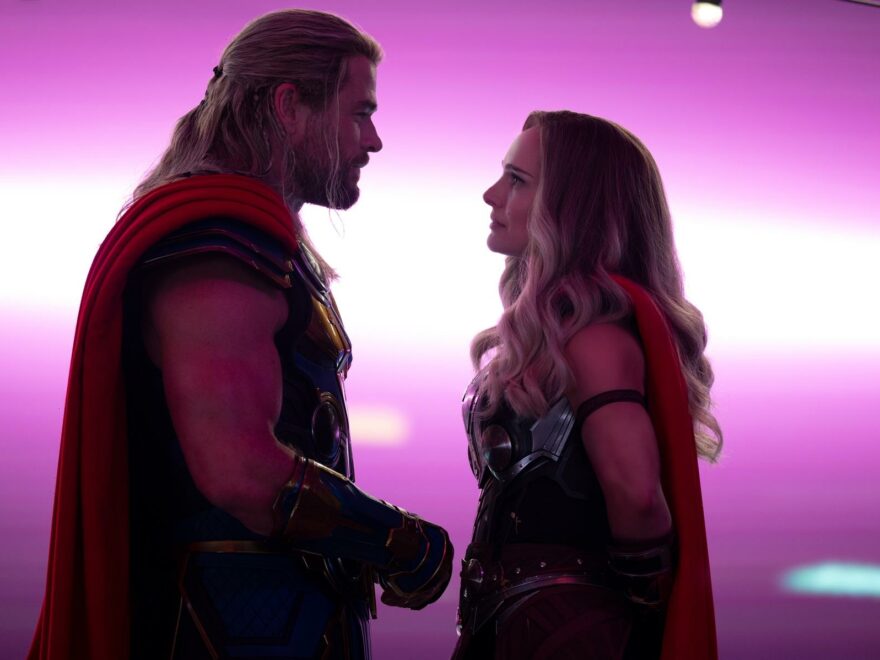 Go back and rewatch that first Thor movie if you haven’t seen it in a while. You might have forgotten how self-serious it is. Sure, you’ve got Tom Hiddleston’s trickster-bro Loki, and Thor eating enough pancakes to give a rhino a cardiac arrest, and our man throwing a mug on the ground to proclaim his love of this mystical new elixir called “coffee.” But it’s mostly an opportunity for director Kenneth Branagh to dig into his theatrical background and reframe a “Thor-igin” story, or at least the tale of how the God of Thunder ended up on Earth, as a historical, royal-family drama with Shakespearean gravitas. That was how the moviegoing public was introduced to Chris Hemsworth’s Asgardian hunk, looking like a big-wave surfer who just got dropped into live-action Jack Kirby panels: the heir to the throne, the superhero who would be king, the brother locked in a power struggle with his jealous sibling over parental love. The sequel, Thor: The Dark World (2013), literally doubled down on the darkness. We do not recommend you rewatch that one.

We bring this up only to emphasize what a breath — nay, a windstorm — of fresh air it was when the third film centered on the blond-tressed Avenger blew into this ever-expanding extended universe. Thor: Ragnarok (2017) involved nothing less than the potential end of everything; the stakes are in the title. Yet here was an absurdist take on Asgard’s favorite son, brimming with the galaxy-hopping cosmic slop of imagination, reinvention and sheer goofiness. Comic nerds could thrill to the way that it channeled the blocky, chunky, neo-psychedelic artwork of Walt Simonson’s classic ’80s run on the title. Everyone else was welcome to geek out on Cate Blanchett’s camp-with-benefits take on Hela, Goddess of Death and Goth Fab Fashion; Tessa Thompson’s drunken, badass and unapologetically sapphic Valkyrie; Jeff Goldblum’s guylinered Grandmaster; and a pile of wisecracking rocks with a New Zealand accent. The script is credited to three writers, but we have one man to thank for this, and his name is Taika Waititi. In one semi-subversive swoop, the filmmaker best known for comedies and coming-of-age movies injected his cracked-auteur sensibility into a franchise without disrupting the corporate bottom-line endgame. It remains a highlight of the MCU and the genre at large. You couldn’t wait to see what Waititi would do next with these characters.

The answer, according to Thor: Love and Thunder, is: tread water. A collision of competing tones, subplots, conceptual big swings and chaos masquerading as pathos, this new addition to the Asgardian-gods-and-monsters corner of Marvel Cinematic Universe is a holy mess. You can still feel Waititi’s sensibility pulsing underneath it all. But there’s a definite lack of focus to this entry, and the sense that you’re merely watching a timekiller until the next grand Phase Whatever storyline of the Marvel soap opera kicks into gear. We may have pitched our expectations a little too high, or put too much responsibility on one filmmaker’s well-tailored shoulders in regards to saving pop moviegoers’ contemporary religion from being too somber for its own good. That doesn’t make this misadventure come off like any less of a major letdown.

When we last saw Thor, he’d hooked up with the Guardians of the Galaxy in an effort to regain his mojo. Per Korg, the stony comic relief that Waititi voices, we find out he’s been bopping with Star-Lord, Groot, et al. from planet to planet, saving alien populations in between dropping those Endgame pounds. He’s also outstayed his welcome with the crew, which makes the distress signal Thor gets from Sif (Jamie Alexander) a convenient opportunity for them to part ways. It seems that a former religious zealot named Gorr (Christian Bale) has heard his prayers to the deities for mercy for on deaf ears, and suffered a great tragedy. After procuring a mystical sword capable of slaying all holy beings, he becomes Gorr the God Butcher and goes about methodically living up to his new name. He’s now set his sights on New Asgard, where Valkyrie (Thompson) is the mayor. When our hero shows up to protect the quaint earth town, however, he discovers there’s already a God of Thunder kicking ass and taking names. New Thor, who’s this?

That would be Jane Foster — welcome back, Natalie Portman! — who’s transformed into her own version of the Norse bringer of pain. You may remember that Thor’s hammer, Mjölnir, was crushed by Hela and that he know wields an axe named Stormbreaker. (Should this plot point from 900 MCU episodes ago been blotted from your memory, don’t worry: The New Asgard players, a theatrical troupe comprised of well-known movie stars, are here to remind you.) Jane feels herself called to New Asgard by the fragmented hammer, which reassembles itself upon her arrival, and boom! She’s got her own Thor get-up now. Her ex-boyfriend is excited and a little nervous to see her again. A romantic-comedy montage gives us the scoop on the couple’s dissolution, and he’s clearly not over her. When Gorr kidnaps the town’s kids to use as bait for luring the Gods of Thunder to their doom, Thor is more than happy have Jane join him, Korg and Valkyrie to rescue them. Maybe he can win back the affectations of his true love.

Except Jane is dying of cancer, something that her transformation is only temporarily putting on hold, and it’s here that Thor: Love and Thunder aims to give the movie a sense of poignancy while pinging between humor and outright horror. These are not mutually exclusive flavors of storytelling, of course, and kudos to Waititi and co-writer Jennifer Kaitin Robinson for aiming for heart and not simply the stoking the dopamine centers. But it does require the ingredients to work in harmony.

Instead, we get what feels like several movies trying to jostle for space and screen time, each of them roughly stapled together in the hopes that everything eventually coalesces together out of sheer will. There are moments when it feels like you’re watching a Marvel sitcom, with the gang getting into scrapes and playing off of Russell Crowe’s outrageous Zeus, a Greek god borrowing one of House of Gucci‘s Italian accents. Sometimes you feel Hemsworth and Portman trying to turn their character’s love story into Love Story, in which going into battle together against a god-slaughtering monstrosity means never having to say you’re sorry. Other times, it’s a fable of kiddie empowerment (you call feel a white-gloved mouse hand leaning heavily on the scales, especially once the third act kicks into gear) or something close to a Dark World-lite remake, with Bale turning everything into shadowy scenery-chewing on a shadowy planet.

That’s not counting the gratuitous glorified cameos (Pratt and the GotG gang) or the supporting turns that feel half-baked — why give a great actor like Thompson a great role like Valkyrie and then curiously give her little to do besides the occasional wink and pow? (It is indeed confirmed where her character falls on the Kinsey scale, yet she’s still forced to chastely kiss a maiden’s hand after derring-do; gotta sell tickets in China and Saudi Arabia, folks.) And for every moment in which Waititi’s humor shines through beautifully — let’s just say Thor feels betrayed his hammer found a new owner, and Stormbreaker is also very much the jealous type — there are running gags, like the extraterrestrial goats whose bleating goes to 11, that are run into the ground.

For something so reliant on dramatic engagement in addition to spectacle and giggles, Love and Thunder feels oddly unengaging; even the love and death aspects often feel like cold transmissions from distant sources. We’re given set-ups for future installments, naturally, and a farewell for someone who may or may not still be back whenever convenience deems it so. What we don’t get is a movie that feels like it’s justifying its own reason for being. The good news is: This franchise isn’t going away any time soon. Waititi has earned the right to wield the series hammer. You hope his next swing favors hits the target a little better and breaks more molds instead of just box-office records.