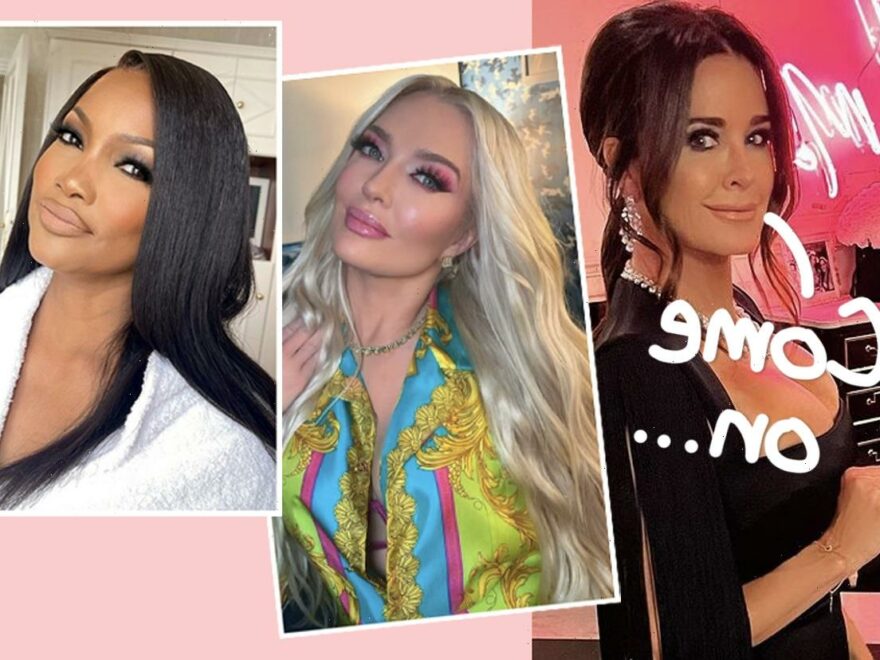 Kyle Richards is catching heat online for her comments on an upcoming episode of The Real Housewives of Beverly Hills!

The Bravo star is the focus of a sneak peek just dropped by the TV outlet ahead of their all-new Wednesday night episode, and fans online are already reacting negatively to her — and also to co-stars Dorit Kemsley and Erika Jayne.

The controversy started in a clip where Erika berates Garcelle Beauvais‘ 14-year-old son Jax by ordering him to “get the f**k out” of his mom’s birthday party while it was being filmed. Dorit was the first one to witness Erika’s (supposedly drunken) behavior, and she said in a confessional that she was “sick to her stomach” over it. And yet, later on in the clip, Dorit can be seen laughing about the moment with Kyle and their husbands. Sooooo which is it, then?!

Bravo fans witnessed as Kyle and Dorit’s partners Mauricio Umansky and Paul “PK” Kemsley seemed to back Erika’s “genuine” decision to cuss out a teenager. During a follow-up sit-down, the men argued that Tom Girardi‘s ex was warranted at least one “blowout” following all that has happened recently in her life. PK even made a joke about how Erika had supposedly “tried to bang” Garcelle’s oldest son Oliver, at one point, too. Yeesh…

In her own thoughts about the moment during the sit-down with Mauricio and the Kemsleys, Kyle explained:

“It’s not funny, but it is funny. The Erika that we’ve known all these years was holding a lot in, so seeing this side of her — more open and honest — even if she’s not always showing her best side, at least it’s genuine.”

And Kyle later added more in her own confessional clip:

“I can remember, in the first few years I knew Erika, I used to think, ‘I wish she would open up more. I wish she would loosen up a little bit.’ … Clearly, the Erika that we’ve known all these years was holding a lot in. So seeing this side of her, more open and honest, even if she’s not always showing her best side, at least it’s genuine.”

OK, maybe, but cussing at someone else’s child is now getting praise as being “genuine”?! Oof…

As expected, the clip created a HUGE stir online.

And Kyle quickly stepped up to defend herself! Taking to the IG comments section of that clip hours after it was posted, the 53-year-old reality TV veteran wrote (below):

“I was laughing about a friend’s drunken, ridiculous behavior. NOT about disrespecting someone’s child. I think you know me better than that by now. I wasn’t even there to see this and only heard about Erika and what she had said later.”

That seems like an odd hair to split — since the friend’s drunken, ridiculous behavior was disrespecting someone’s child.

But aside from what fans think, it seems the moment is going to cause a bigger issue behind the scenes — if it hasn’t already!

On Monday, a fan tipped off Garcelle to the existence of Kylie and Dorit’s discussion on Twitter, and momma clearly seemed unhappy about the content:

And Garcelle wasn’t done there! On Tuesday morning, she appeared to re-address the controversy by explaining how all three of her sons make her “so proud” when they “show respect to people even when they don’t deserve it.”

Yep, DEFINITELY a message for her co-stars in there.

What do U make of it, Perezcious readers??