Like Kim Kardashian, Kanye West has legally asked for joint custody of their four children, North, 7, Saint, 5, Chicago, 3, and Psalm, 1, in new paperwork that was filed on Apr. 9.

Kanye West, 43, has officially responded to Kim Kardashian‘s divorce filing, which happened in Feb., and it turns out they are both asking for joint custody of their children. The rapper filed legal paperwork with his attorney on Apr. 9 and in addition to the divorce details, which lists “irreconcilable differences” as the reason for their split, there are details about how the former couple will share custody of North, 7, Saint, 5, Chicago, 3, and Psalm, 1. The documents, which can be seen below, show that like Kim did, Kanye is requesting both joint physical and legal custody. 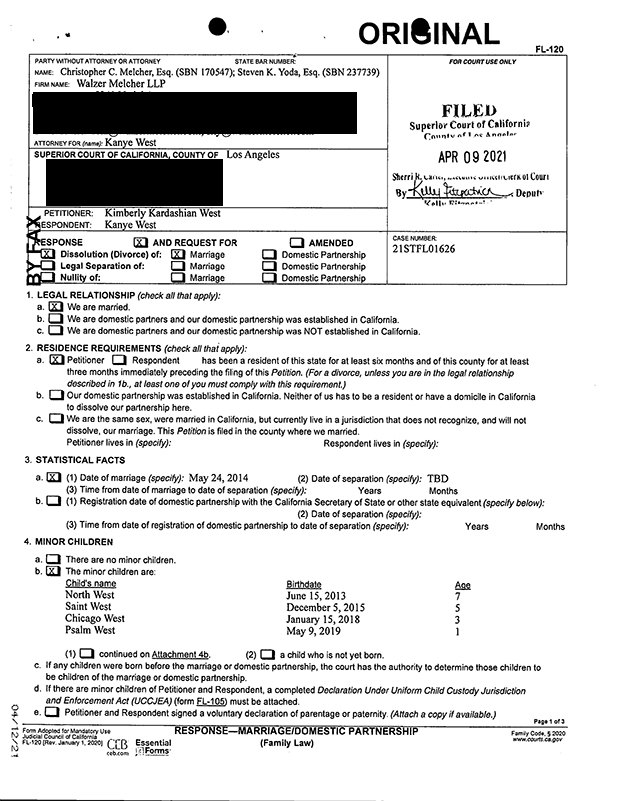 The request comes almost two months after Kim and Kanye made headlines when she filed for divorce. Although both of them have been publicly quiet about the situation, a source recently told us they are still making co-parenting work despite the fact that Kanye has been spending most of his time at his Wyoming ranch and Kim has been spending most of hers at her California home. 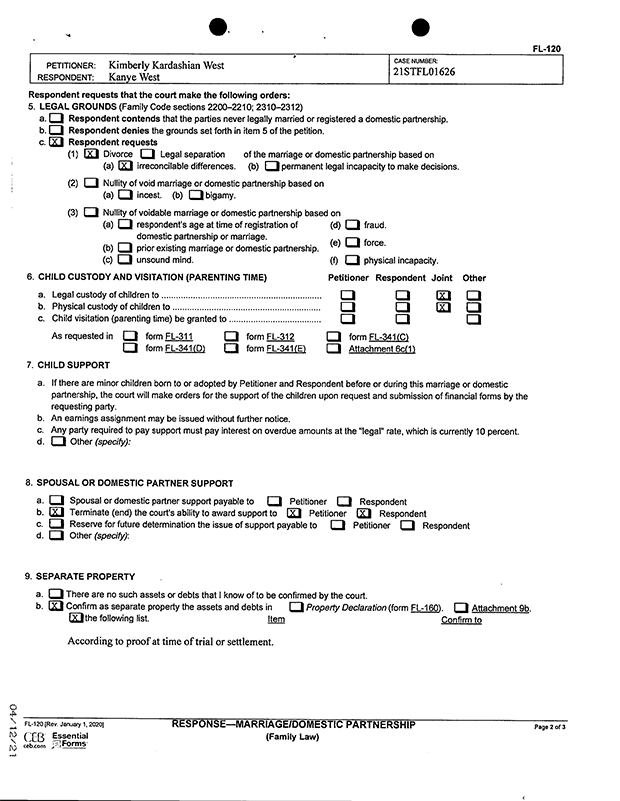 “They’ve really drifted apart in terms of communication over the last few months, even more so recently,” the source EXCLUSIVEY told HollywoodLife this past weekend. “When they’re talking it’s strictly about the kids or business type of stuff and Kanye will FaceTime when he wants to see the children and Kim is really great about that. He’s still seeing the kids they’re just keeping it all private and quiet and it’s not for long periods of time. She’s trying really, really hard when it comes to communicating.”

“Kim will take them up to Wyoming for a night or he’ll come out to California for a few days and stay with friends,” the insider continued. “That’s been their routine. It’s really on his schedule which can be frustrating.”

Kim and Kanye, who had faced divorce rumors on and off over the past few years, were married in May 2014. Last year, there were hints that their marriage may have been on the rocks when Kim was spotted crying during what looked like a tense conversation with the father of her kids in a car during a trip to Wyoming. Less than two weeks before Kim filed for divorce, Kanye also reportedly moved 500 pairs of sneakers and other things out of their Calabasas home.