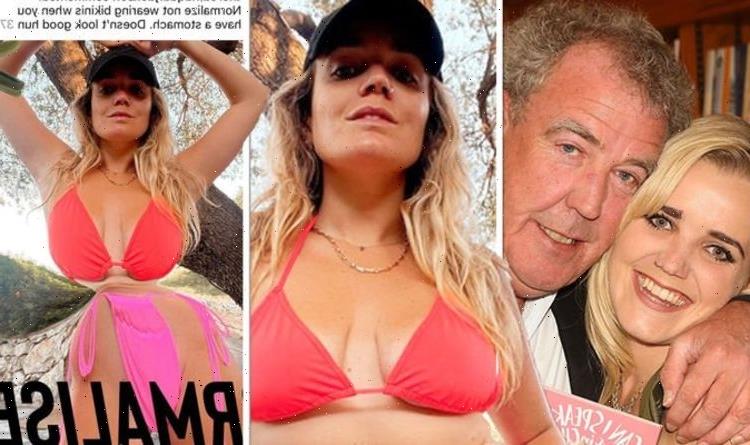 Emily Clarkson reveals dad Jeremy is 'on the mend'

Jeremy Clarkson’s daughter Emily Clarkson took to Instagram to address “normalising” the ageing process. The 27-year-old, who is the daughter of The Grand Tour star and his ex-wife Frances Cain, took to the picture-sharing site to share two images of herself in a bikini.

However, it appeared that one social media user was unimpressed with the journalist’s photos, as they took aim at Emily’s appearance today.

The Real Flaquar Jackson commented: “Normalise not wearing bikinis when you have a stomach. Doesn’t look good hun.”

Emily shared the message in view of her 231,000 followers, which she accompanied with a photo of an altered image of herself in swimwear.

She captioned the post: “Normalise only wearing bikinis if you DON’T HAVE ONE OF YOUR VITAL ORGANS !! Also normalise not telling women on the internet what to do with their bodies.”

Fans of the author flocked to comment on the post as they offered their support to Jeremy’s daughter.

Isabelle Davis applauded: “YOU SAID IT! Imagine saying that to someone.”

Caitlin McGarry agreed: “It’s a piece of clothing?! I cannot fathom how anyone thinks they have the right nor the inclination to tell others what to wear! Reflects more on their character than anything.”

“Don’t rise to it. Ignore and block. Trolls are all over the internet unfortunately. Personally, I think you look great either way though,” Rikky added.

It comes after Emily took to Instagram with a side-by-side image of herself in a bikini.

In one photo, the journalist sported a multicoloured two-piece which showcased her taut stomach with a pierced belly button from three years ago.

The second photo was more recent as Emily sported a pink ensemble.

She posed for the snap showcasing her curves which she accessorised with a gold chain and a black cap.

In a lengthy post, Emily began: “We’ve been conditioned to believe that weight gain is synonymous with failure and that to succumb to the ageing process is tantamount to letting go, or giving up.

“We are a society obsessed with youth, one that fetishises it relentlessly. They like us slim, smooth and hairless. Which is creepy. But also, standard. Anti-ageing this. Weight loss that. Smooth it. Conceal it. Plump it. Shrink it. Take years off! Inches off!”

The journalist said it was “ludicrous” to be forced to live up to unachievable beauty standards.

“Ironically if I had seen this side by side when I was 22 I wouldn’t have liked it. I’d have thought it was the wrong way around,” Emily continued.

“Because the only ‘before and after’ I had ever seen were ones on gym accounts, in weight loss adverts and magazines and in those the slimmer person was ALWAYS the happy ending. The success story. Because like I say; in this society, SMALLER means BETTER. BIGGER means BADDER.”

“We are sold youth RELENTLESSLY. And part of that marketing means that we are taught to fear ageing and the changes that they bring. Which is f***ing heart-breaking because to grow is the greatest privilege there is.”

She finished: “I have grown insurmountably over the last five years. In strength, in kindness, in love, success, ambition, passion and patience. I have lived more, laughed more, eaten more, seen and done and LIVED more. I am MORE.