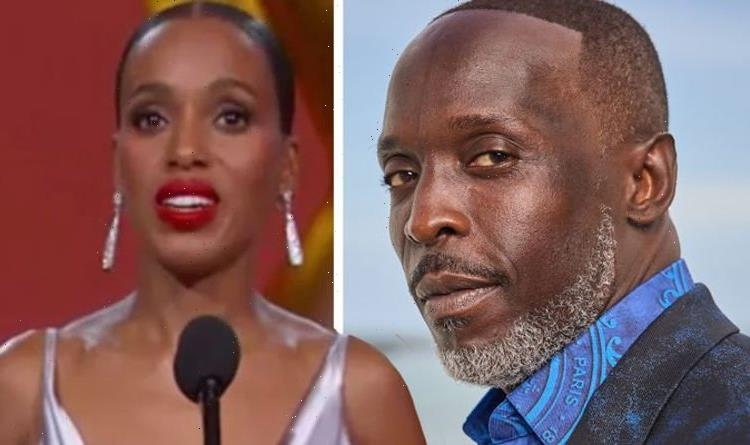 Emmys: Stars arrive on the red carpet for awards show

Actor Michael K Williams, who died earlier this month at the age of 54, was honoured at the 73rd Emmy Awards ceremony on Sunday night with a special tribute. Law-enforcement sources have confirmed to The New York Post that the star was found dead in his Brooklyn apartment on September 6.

Michael had been nominated for his role as Montrose Freeman on Lovecraft Country in the Outstanding Supporting Actor in a Drama Series category.

And his memory lives on, as he was praised by actress and Emmy presenter Kerry Washington, before she announced the nominees.

“…A brilliantly talented actor and a generous human being who has left us far too soon.

“Michael, I know you’re here; you wouldn’t miss this.

“Your excellence and artistry will endure.

“We love you,” she smiled, before announcing Tobias Menzies as the winner for his role in Netflix’s The Crown.

Tobias wasn’t in attendance at the ceremony, with Kerry accepting the award on his behalf.

Taking to Twitter to share their thoughts on the touching tribute, one fan wrote: “That was a really lovely thing to do. Rip Michael.”

“So sad Michael K Williams couldn’t be there to hear his name read out,” a second penned solemnly.

The Wire actor had been found by his nephew in the living room of his Kent Avenue penthouse.

His cause of death has not yet been confirmed.

The Emmy nominated actor and producer was best known for his roles in HBO hit series The Wire, where he played Omar Little.

He began his acting career on stage in several productions for La MaMA Experimental Theatre, the prestigious National Black Theatre Company, and the Theater for a New Generation, directed by Mel Williams.

Michael received his first Emmy nomination in 2012 for Outstanding Supporting Actor in a Limited Series or a Movie for HBO’s Bessie.

He also received his second nomination for Outstanding Supporting Actor in a Limited Series for his role as Freddy in HBO’s The Night Of.

Michael went on to appear in a number of films including Ghostbusters, Assassin’s Creed, Bringing Out the Dead, 12 Years A Slave, The Road, Gone Baby Gone, Life During Wartime, Brooklyn’s Finest, Wonderful World, Snitch, Robocop, The Purge: Anarchy, Captive, Kill The Messenger, Inherent Vice, Triple 9, The Gambler and The Land.