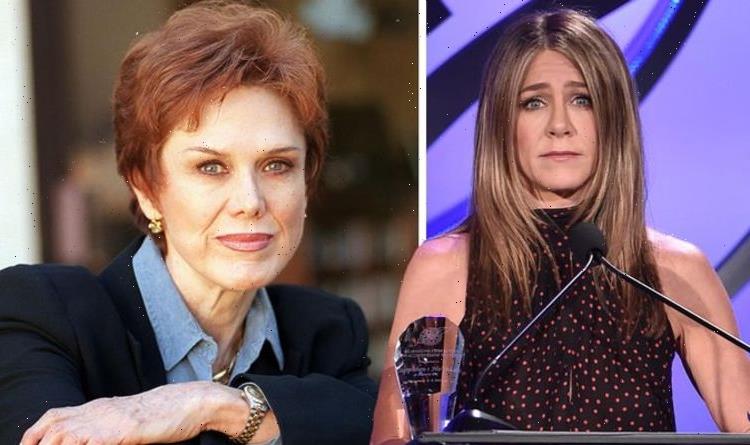 Jennifer Aniston, 52, believes the reason she never crumbled or had a public breakdown was down to her childhood and turbulent relationship with her mother, Nancy Dow. The actress rose to fame in the 1990s after she was cast as Rachel Green on popular US sitcom Friends, but with the instant fame came tabloid pressure.

She would hold grudges that I just found so petty

In a new interview, Jennifer revealed she managed to keep it all together through “a godsend of support”.

“[There are just so many evolved, positive people around me,” she beamed.

“I also grew up watching someone [her late mother] sit comfortably in victimhood, and I didn’t like how it looked.

“I knew that this person was giving me an example of what I’d never want to be, and I will never ever be that.”

Nancy, who died in 2016 at the age of 79 after suffering two strokes in 2011 and 2012, was a model and actress who starred in TV shows such as The Beverly Hillbillies and The Wild Wild West.

The pair drifted apart in the 1990s, and apparently didn’t speak for a decade.

They reportedly only reconnected after Jennifer split from Brad Pitt in 2005.

But the Horrible Bosses star went on to admit their relationship at times was “toxic”, stating that victimhood “erodes your insides and your soul”.

However, she admitted finding yourself in a place where you’re crumbling in front of the world is “all relative”.

“Is it a sliver of an annoyance to have to publicly go through dark s**t in front of the world?” she questioned rhetorically.

“Yes, it’s an inconvenience, but it’s all relative.

“So, I had a choice to make: either I’m going to surrender into bonbons and living under my covers or I’m going to go out there and find a creative outlet and thrive, and that’s what I did.

“It just happened to be with a movie called The Break-Up!” she told the Hollywood Reporter.

In a previous interview with the publication, the Friends star revealed her mother was fixated on her appearance, given that she had been a model.

“She was very critical of me. Because she was a model, she was gorgeous, stunning… I wasn’t,” Jennifer sighed.

“She was also very unforgiving. She would hold grudges that I just found so petty.”

And a lot of what she was feeling was channeled into her character Rosie, in Netflix movie Dumplin‘, about a former pageant queen with a young daughter.

But she developed perspective and realised her mum was just trying her best.

“She did it because that was what she grew up with,” Jennifer concluded.

“My mom said those things because she really loved me.

“It wasn’t her trying to be a b***h or knowing she would be making some deep wounds that I would then spend a lot of money to undo.”