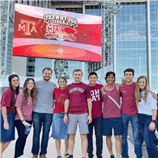 Jana Duggar has become more mysterious than ever in recent months.

For a while, Duggar fans were abuzz with the news that Jana was bring courted by Stephen Wissmann, a Nebraska-based businessman, musician, and amateur pilot.

While there was never any official announcement, the rumors were greeted with giddy glee by Jana devotees, many of whom had been waiting more than a decade for news that their favorite Duggar had found Mr. Right.

Unfortunately, the relationship began not long before Josh Duggar was arrested on child pornography charges.

In the wake of the arrest, the Duggars decided to keep all family news under wraps, and developments such as new courtships were no longer announced to the public.

And so, Jana’s fans never got to share in the news of her first and perhaps only serious relationship.

And the situation is made that much sadder by the news that Jana and Stephen appear to have called it quits.

Due to all the secrecy surrounding their relationship, it’s not totally clear what led these two to go their separarte ways.

Insiders say Jana dumped Stephen out of nowhere, but given the level of secrecy surrounding the Duggars these days, we’ll almost certainly never know for sure.

Whatever the case, it appears that the relationship between Jana and Stephen really has come to an end.

For starters, the couple hasn’t been spotted together in several weeks.

And considering the fact that Jana had been making regular trips to Nebraska to spend time with Stephen and his family, that’s a relatively major development.

And now it seems that we have more bad news for anyone who might have been holding out hope about the possibility of a Jana-Stephen reconciliation;

Jana attended the Arkansas vs. Texas A&M game over the weekend, and Stephen was nowhere to be seen.

Not only that, fans were shocked to see Jana wearing pants and “hugging” an unidentified young man.

We put “hugging” in quotes there because really, she just has her arm around some dude.

But that qualifies as a “side-hug,” according to the Duggar courtship rules, which don’t allow any face-to-face physical contact between unmarried members of the opposite sex.

Yeah, we almost can’t overstate how bizarre this family is.

Anyway, the pic took fans by surprise, not only because Jana is violating the infamous Duggar dress code by wearing jeans, but also because she appears to be very much enjoying the company of her mystery man.

“Pannntttttttttssssssssss. I freaking love this more independent Jana!” one commenter wrote, according to UK tabloid The Sun.

“Oh lord!…Here comes the people who are going to gossip about the guy next to Jana in 3…2…1…” another joked.

“Does Jana have a boyfriend ?” while a fourth complimented: “Love you rockin’ those pants! Looks good!! You look so happy!!” a third chimed in.

And, like clockwork, others then swarmed the comment section to speculate about the identity of Jana’s mystery dude.

“And who’s the guy you have your arm around and sitting next to you?” one person asked.

Given the level of secrecy that the Duggars are maintaining, it’ll probably be a long time before we find out who this guy is.

But one thing is for sure — Jana and Stephen are totally kaput.