The hugs with their team at LAX after they returned to California said it all: Prince Harry and Duchess Meghan’s first big trip as independent royals was a success.

Along with their onstage appearance at Saturday’s Global Citizen Live concert, the Duke and Duchess of Sussex conducted a whirlwind mini tour of New York, connecting with senior politicians, world leaders, health officials, and grassroots organizations across the city. For the Duchess of Sussex, it was her first time back in the city since her 2019 baby shower. “I love New York,” she said during her September 25 visit to the United Nations headquarters. “It’s so great to be back.”

And though much of their visit—which coincided with the U.N. General Assembly and President Joe Biden’s COVID Summit—focused on challenging vaccine inequity, their schedule also included amplifying other causes. Their September 24 appearance at an elementary school in Harlem to promote children’s literacy gave Meghan the chance to read her children’s book, The Bench, to a group of enthusiastic second-graders, and offered an opportunity for the couple to make an immediate impact on the community. Despite spending only five hours in the Upper Manhattan neighborhood, the mark they left behind was permanent—in the form of planters and gardening equipment in response to a local need for easier access to healthy food, Proctor & Gamble items in the school’s pantry to help families take care of their personal health, and reading nooks in Graham Windham nonprofit locations across the city to support families’ access to books. 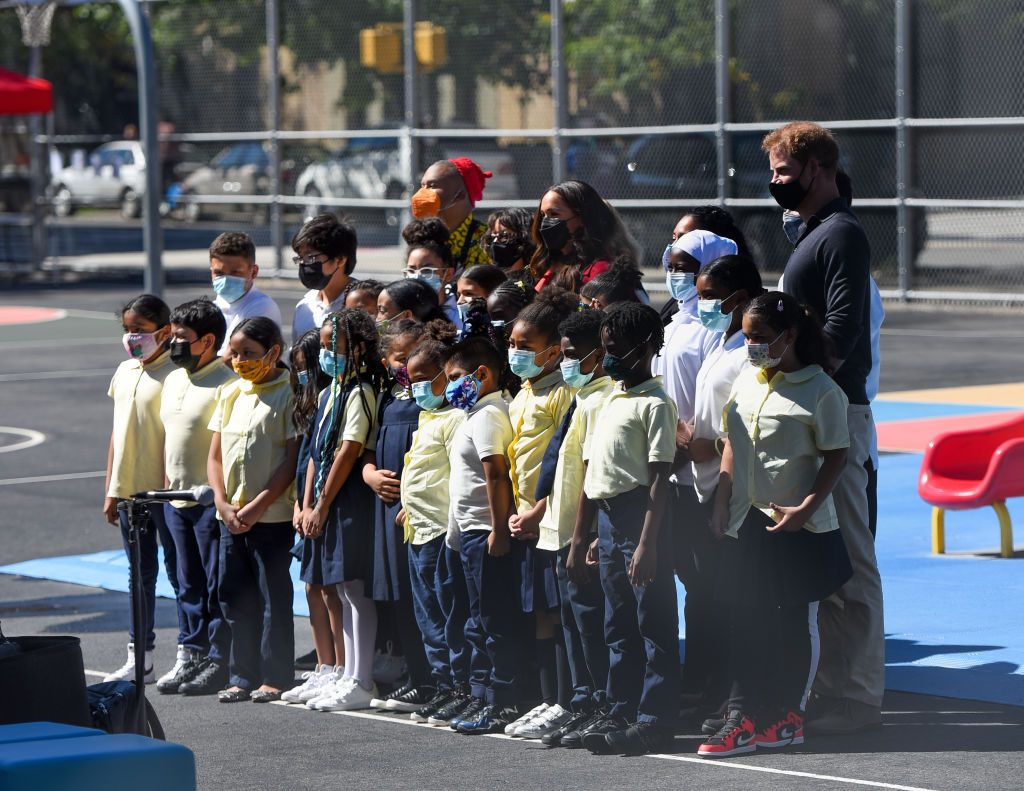 “For the children, it was an experience they won’t forget … and it really lifted spirits for all of us after a difficult 18 months,” James Reynolds, an art teacher who worked with children at P.S. 123 Mahalia Jackson to create a colorful mural for the Sussexes, tells BAZAAR.com.

It was also in Harlem that they helped the support staff at Southern-style restaurant Melba’s after stopping by for a low-key lunch. (It was Harry’s first time eating chicken and waffles!) Restauranteur and owner Melba Wilson—who opened the retro-style venue in 2005—called the visit a “dream come true,” adding, “It was completely unexpected. We offered to close the restaurant for them to dine privately, but they wanted to be around the people and were happy to have conversations with other customers, the staff, and our chef. They were really down to earth.” As the couple left, they surprised Wilson with a $25,0000 donation from their Archewell Foundation to support the Melba’s COVID-19 Employee Relief Fund, which aids employees and other restaurant workers who have experienced major salary loss during the pandemic.

Still, there was time for diplomatic affairs. The couple arrived on the East Coast to a meeting with New York Mayor Bill de Blasio and Governor Kathy Hochul, where they remembered the lives lost during 9/11 at the One World Observatory and the World Trade Center memorial. “It was important for Harry and Meghan to be able to pay their respects,” de Blasio later told reporters, including BAZAAR. “We’re very excited to have them here in the city.”

Proving their pulling power as global philanthropists, the couple—representing their Archewell Foundation—also convened a roundtable session in partnership with the World Health Organization for a conversation on achieving shared global vaccine equity goals. Speaking to 18 attendees—including Gavi CEO Dr. Seth Berkeley, Assistant Director-General of WHO Stewart Simonson, and Director at the Office of Global Affairs, U.S. Department of Health, Loyce Payce—the Sussexes listened and made suggestions as they discussed a number of crucial global health priorities, including the wide gap between wealthy and developing nations.

“Building on ongoing conversations we’ve had with global leaders over the past 18 months, today further reinforced our commitment to vaccine equity,” the couple said in a September 23 statement shared with BAZAAR. “We’re so encouraged by the spirit of collaboration we heard throughout our conversation and are eager to do our part.”

“We’re grateful to the Duke of Duchess of Sussex for working with us to bring together this critical conversation,” Dr. Tedros Adhanom Ghebreyesus, the director-general of WHO, added. “We are at an important crossroads for vaccinating the world.“ Chelsea Clinton, who represented the Clinton Foundation during the gathering, later remarked that she was “very impressed” by the couple.

A day later, the couple met with U.N. Deputy Secretary-General Amina Mohammed, who received them at the U.N. headquarters. A spokesperson for the Nigerian diplomat tells BAZAAR that during the meeting, Mohammed “commended the initiatives of the Archewell Foundation in promoting vaccine equity around the world.”

Though moments of the Sussexes’ visit carried hallmarks of a royal trip, the absence of palace protocol meant that the couple were free to plan an itinerary without interference—or fear of engagements being deemed “too political.” Vaccine equity, for example, is a topic members of the royal family have yet to address. It also allowed the couple to carry out some of their work away from the press, resulting in a number of moments being captured only by the couple’s accompanying photographer, Matt Sayles, and a videographer working on a future project.

Capping off their four-day visit, Harry and Meghan—who left children Archie and Lilibet Mountbatten-Windsor in the capable hands of grandmother Doria Ragland back in California—saved their biggest appearance until last. Having served as co-chairs for Global Citizen’s Vax Live event in May, the couple continued their collaboration with the advocacy platform by speaking onstage during the New York leg of its 24-hour Global Citizen Live event.

“Every single person on this planet has a fundamental right to get this vaccine,” Meghan told the crowd, who cheered and whistled for the couple. “And while in this country and many others, you can go almost anywhere and get vaccinated, billions of people around the world cannot.”

Harry continued, “Guys, we have what we need to vaccinate the world. Many countries are ready to produce vaccines back home, yet they aren’t allowed to because ultra-wealthy pharmaceutical companies are not sharing the recipes to make them. … All they are waiting for is the vaccine intellectual property to be waived and the vaccine technology to be transferred over.” 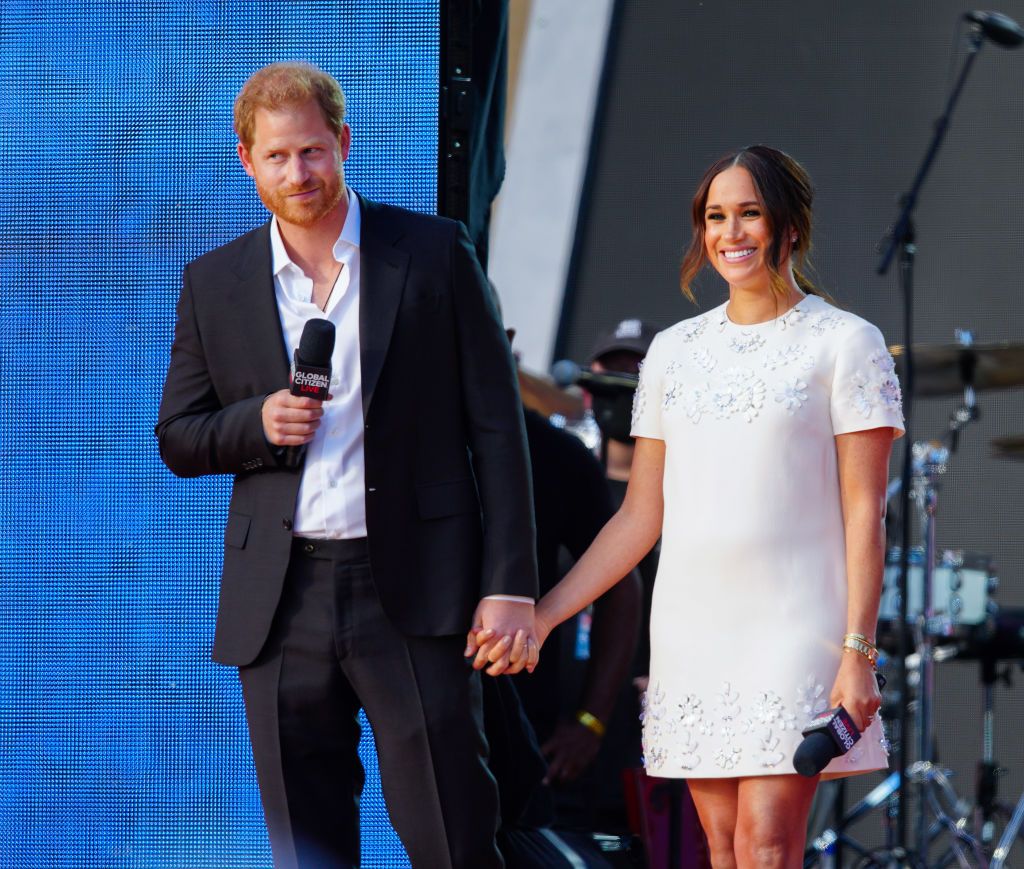 Naturally, their visit did not come without criticism—and unwanted intrusion—from the British press. Palace aides were quoted by one tabloid as feeling “nervous” about the couple continuing with a “royal model” of work, and another newspaper wrote more than half a dozen articles questioning Meghan’s choice of “winter coats” during New York’s warm fall weather. Undercover reporters also managed to photograph the couple at the bar in the Carlyle hotel on two evenings, including post-dinner drinks with friends Misha Nonoo and husband Mikey Hess. “The tabloids will do as the tabloids do,” a friend of the duchess tells BAZAAR. “Only difference now is that they really don’t pay attention to it. It doesn’t penetrate their world.”

Regardless, their words on vaccine equity were heard loud and clear by millions around the world, and their efforts—alongside world leaders, advocates, campaigners, and performers—helped this year’s Global Citizen Live raise $1.1 billion to support climate, famine, and COVID response efforts, and more than 60 million COVID-19 vaccines.

Vaccine equity will continue to be a primary focus for the Sussexes. As they take the final steps out of their parental leave following the birth of their daughter and COVID restrictions are further eased, Harry and Meghan will be increasingly visible over the months ahead as they unveil more work happening within their Archewell Foundation. “This was a knockout trip,” the friend says. “It’s an exciting time. … There is so much they want to achieve, and there is only two of them, but they’re in it for the long haul.”