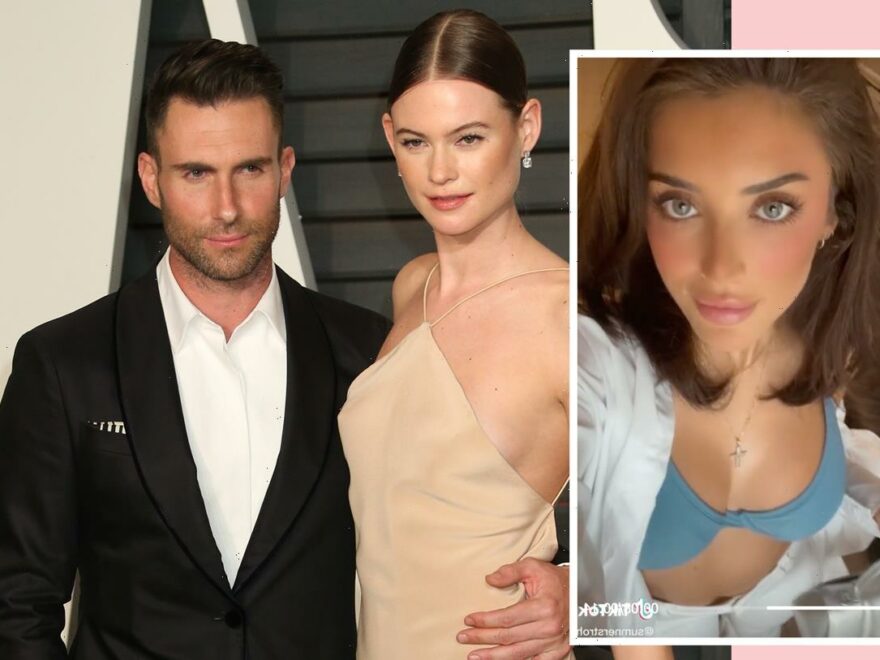 Is Adam Levine a dirty, no-good cheater that had an extramarital affair for A YEAR?! The new question we have is… why are we learning about this now? Did something happen??

On Monday morning, an Instagram model named Sumner Stroh posted an incendiary video to her TikTok in which she claimed she was seeing Adam for about a year, which ended a few months ago. And she brought the receipts, too, displaying very realistic looking DMs that were purportedly from the Maroon 5 frontman.

If that weren’t enough to disgust, she even had a message in which the Sugar singer allegedly asked her if she minded if he talked wife Behati Prinsloo into naming their third child — the one they’re expecting now — after her! Wild.

In her vid, she claimed she “never wanted to come forward” because of “implications” and “stereotypes” about her job as a model. Not sure exactly what that means — Behati herself is a model. Anyway, Sumner said she only went public because a friend who knew about it was trying to sell the story to a tabloid, and she wanted to tell it in her own way.

Well… it’s time we look at the way she told it.

First off, she implied a victim status, saying because she was “young” and “naive” that she now felt she’d been “exploited” and “completely manipulated.” (The baby name thing happened a few months ago, she said. So it’s not like the 23-year-old was much younger than she is now.)

But you know what she didn’t do in the way she decided to break the news? She didn’t come out with an apology for Behati. You know, the #1 victim here, the woman being cheated on. Sorry, but it’s important to note — because after you see these signs, you might also be wondering if there was more motivation behind going public with the alleged affair.

What signs are we talking about? OK, so another popular TikToker named Nuha did a deep dive into Sumner’s posts from the past few months, presumably either towards the end of the affair and just after. What she found was a lot of subtweeting and implications that didn’t make sense unless you had the context of knowing which sketchy guy she was dating.

Nuha at first wanted to give the girl the benefit of the doubt — after all, this was a much older, rich and famous rockstar. Maybe he did manipulate her? But then she noticed the lack of apology in her video announcing she’d been hooking up with a man whose wife was pregnant right now. The TikTok detective then pointed out what she called a total “lack of remorse and respect” in her old videos — including one from January that’s since been deleted in which she rolls around on a bed, captioned:

“I look at my life and just laugh sometimes.”

The soundtrack to that video? You guessed it. Maroon 5.

Nuha points out there were comments from Sumner’s mother and sister saying “oh my gosh, song choice.” See, they would have known what in her life she was laughing about. Pretty messed up, right?

In others shortly after that, Sumner seems to imply she’s angry at her beau, quoting:

“Treat me like an option, and I’ll show you how many I have.”

Send this to him u won’t

And then in another post in June, she posted:

Almost like she was angry and looking to get revenge?

Don’t mess w a Leo. We always 3 steps ahead

Put all this together, as Nuha has, and you’ve got a picture not of a poor young girl who was mistreated by a rockstar but of a woman angry about a guy dumping her — and potentially looking to retaliate? Hmm.

We can’t know her true intentions, but at this point we DO know for certain she didn’t take into account Behati’s feelings, at least not in that video. The other thing all these vids tell us, especially that deleted one? This accusation is suddenly a lot more credible as she seems to have hinted at it EIGHT MONTHS ago.

Nuha seems to think she’s doing all this for clout. See her clever take (below):

Replying to @devotedly.yours sad that a female is willing to destroy another females home -especially while she’s pregnant- for her 15 minutes of fame. She’s enjoying every bit of this and I take back trying to be polite towards her????????‍♀️ #sumnerstroh #adamlevine #behatiprinsloo

What do YOU think of Sumner Stroh’s accusations against Adam Levine? Are they true? Why is she going public? What happened between them??

Let us know YOUR theories in the comments (below)!