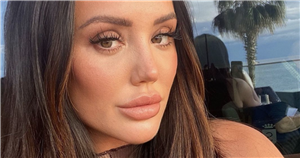 Charlotte Crosby has blasted trolls who say her lips are "too big".

Former Geordie Shore star Charlotte, 31, revealed she is used to being the target of cruel trolls because of her appearance as she spoke on her podcast Values and Vibrators earlier this week.

Charlotte, who recently revealed her boyfriend Liam offered to lend her money as she struggled, told listeners: "If I had a pound for every time someone told me my lips were too big, you know what, I would be s**ting money."

The reality star also admitted she used to have a "simple" view of trolling and even felt she "deserved it" at times.

She added: "I put myself on TV, I've had these procedures done to my face, I deserve it. That's honestly how I felt, I had so little self-worth.

"Everyone is always going to have an opinion on you and you really can't change that.

"Don't have this unrealistic thought in your head that no one is going to say a bad word about me, because it's going to happen."

Charlotte recently received an apology from Channel 5 following an "immoral" documentary, titled What Happened To Your Face?, which dissected the brunette's procedures.

The show, which received more than 7,000 complaints to Ofcom, saw plastic surgeons cruelly brand the star as "plastic" and "rubber lipped" as they theorised the work she had done.

Charlotte, who recently celebrated her 31st birthday with a stylish getaway, also discussed the controversial show on her podcast and the outpouring of support she received from fans after it was aired.

She recalled: "I woke up in the morning after the show and my phone was flooded, everyone was talking about how it was so wrong and something had to happen.

"Everyone else who was caring so much. That made me change my outlook on trolling. I realised that it's actually not okay, it's really, really not okay."

She shared her appreciation with her supporters after outrage over the show sparked an apology from Channel 5 as the programme was later pulled.

Geordie Shore star Charlotte explained how the outpouring of support made her realise that the trolling she had received over the years was wrong.

She explained: "I had the whole of the UK championing us and it was crazy.