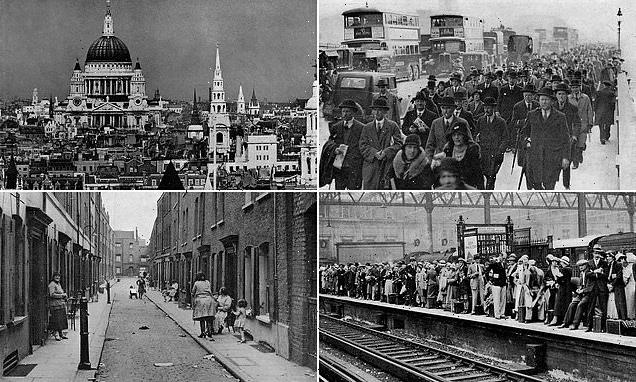 In 1935 a book was published that provided a vivid snapshot of life in London between the wars as viewed through the eyes of a foreigner.

Now a new edition of the time-capsule tome, called The Spirit of London, has been released by publisher Batsford.

The author is Austrian traveller and writer Paul Cohen-Portheim, who was interned in the UK during World War I. His enforced stay made him fall in love with England and, in particular, London. After the war, he wrote ‘England, the Unknown Isle’ and later The Spirit of London, the last thing to be published after his sudden death in 1932.

His aim with the book was to reveal what was ‘most remarkable, curious, or unknown in London… to convey the atmosphere and spirit of London’.

The book does so through writing that channels Cohen-Portheim’s affection for the city and pre-war photographs, some of which he took, of scenes including packed train platforms, throngs of commuters on London Bridge and people lying around on the grass in Hyde Park.

Scroll down to see MailOnline Travel’s pick of the book’s memorable images, with captions drawn from the author’s descriptions.

The iconic dome of St Paul’s. In the book, Cohen-Portheim writes: ‘The City is truly a wood you cannot see for trees, and only, when you cross the Thames and gain a little of that distance the narrow streets deny you, will you discover its real character, that of a city of offices and warehouses surmounted by innumerable steeples and towers of churches, dominated by the huge dome of St. Paul’s; and thus unique in character’ 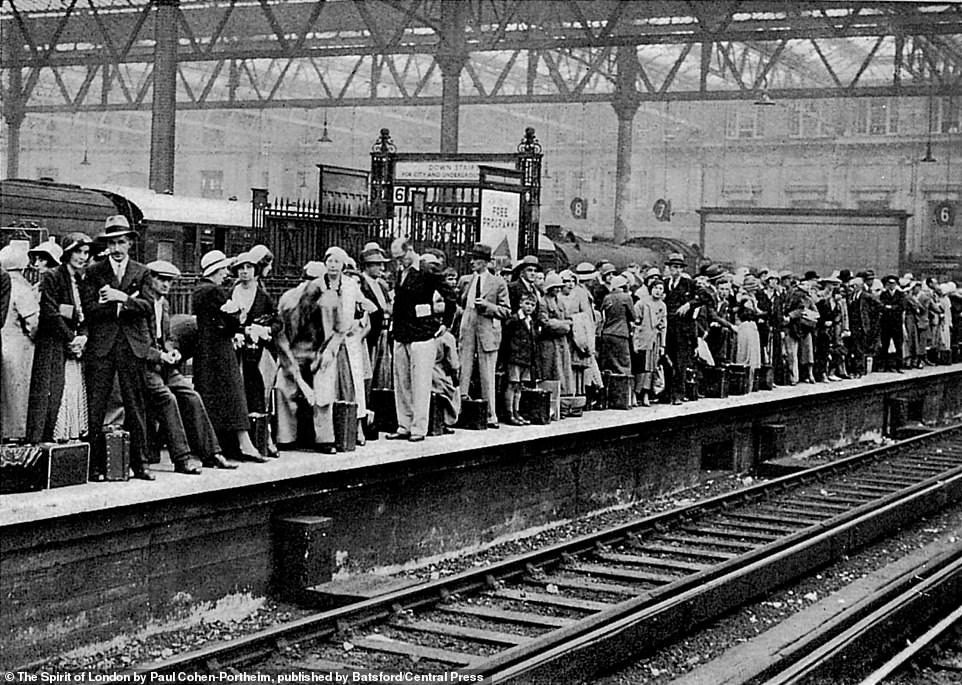 Holiday crowds at Waterloo railway station. In the book, Cohen-Portheim writes about London’s ‘seasons’: ‘A few months in each year are set apart for all that is gay and brilliant socially. Happily these are the months of spring and early summer. London has to pay for this concentration of gaiety by quiet times, for in August not only Society but the vast masses leave it, while September is quiet, too, though October brings the “Little Season,” not officially recognised nor as brilliant as the real Season, but in many ways pleasanter, being less of a rush. Christmas brings its traditional festivities, its turkeys and plum puddings, and the pantomimes… The early months of the year are perhaps the quietest of all; Society is hunting in the country or has gone abroad; weather and health are poor, London is gloomy… foggy, splenetic’ 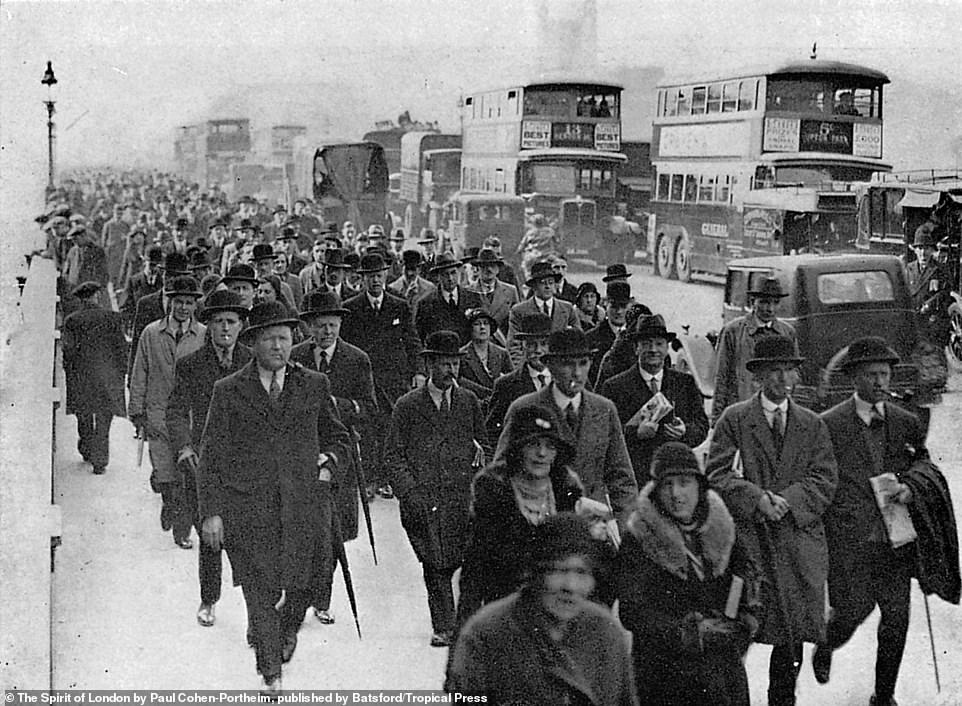 London Bridge and a morning influx of city workers. According to Cohen-Portheim, rush hours were ‘not even really rushed’ in the 1930s. He writes: ‘It is just an uninterrupted but calm stream, and it is most fascinating to watch the human masses pouring into this cramped receptacle from railway and Tube stations and over the bridges, or to see it being drained’ 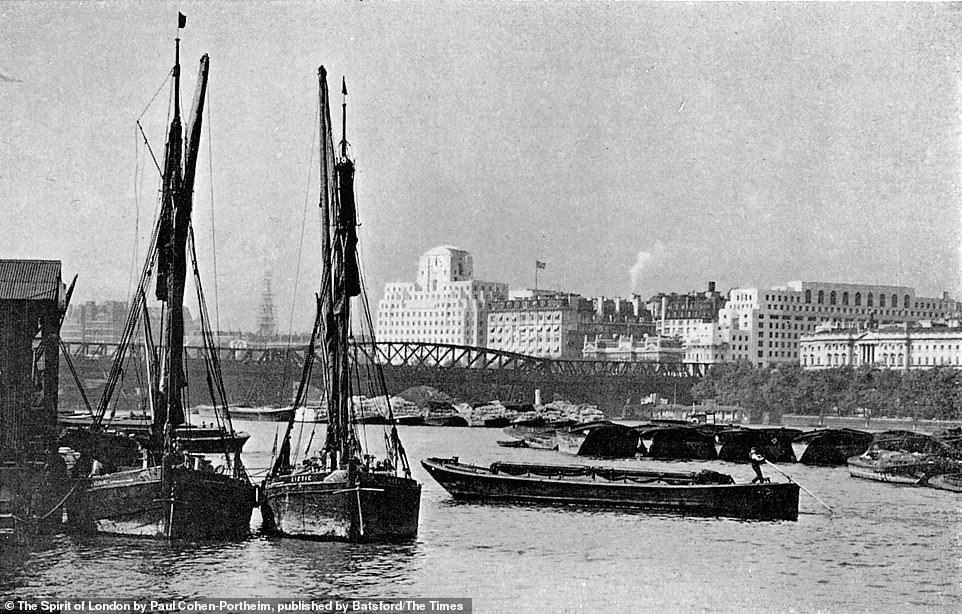 The changing riverfront: The old Waterloo Bridge, with the new buildings on the Victoria Embankment. It was decided in the 1930s that the original structure of Waterloo Bridge should be demolished and replaced by a new one 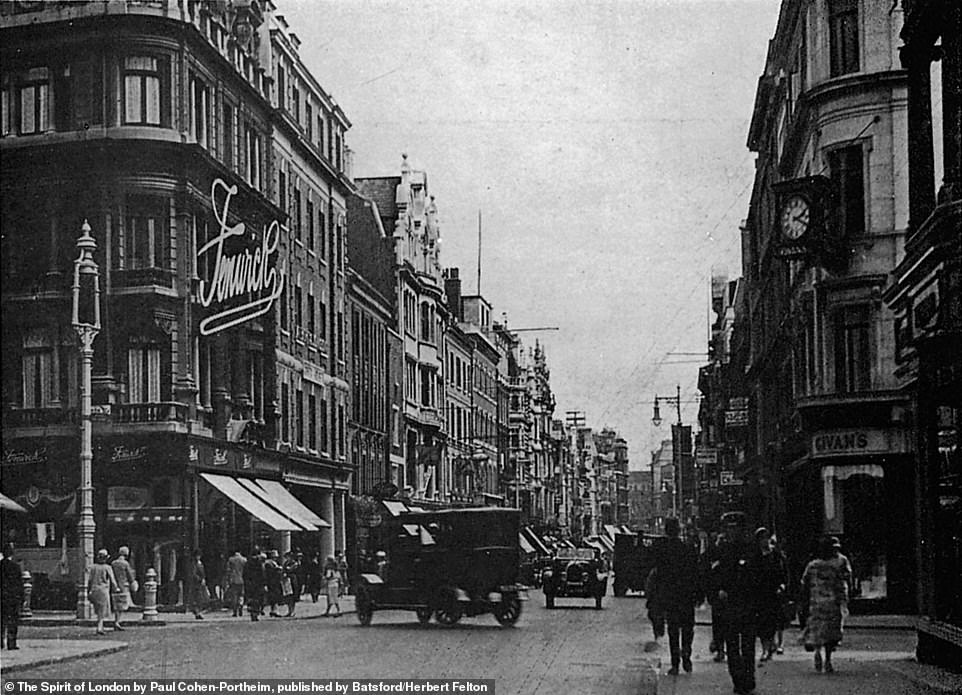 Cohen-Portheim describes Bond Street, pictured, as being part of ‘Smart London’. He explains: ‘Here people of like social status as of like professions like to crowd together to the exclusion of outsiders, and thus to live in a small town of their own which alone to them is “London”‘ 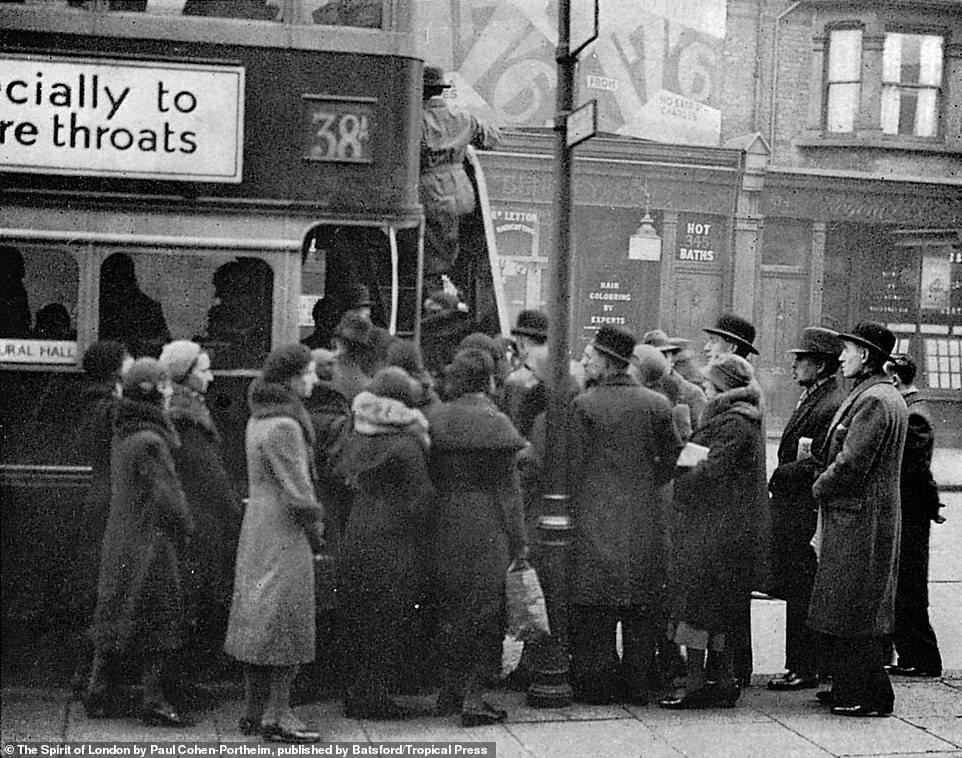 Rush hour: A mild struggle for a northbound bus. ‘It is as one whole that one remembers the City, one does not think of its separate streets. The picture conjured up is one of a medley of grey banks, offices, pillars, columns, red buses, white steeples, and a seething mass of predominantly masculine humanity, all outcrowding each other,’ Cohen-Portheim writes 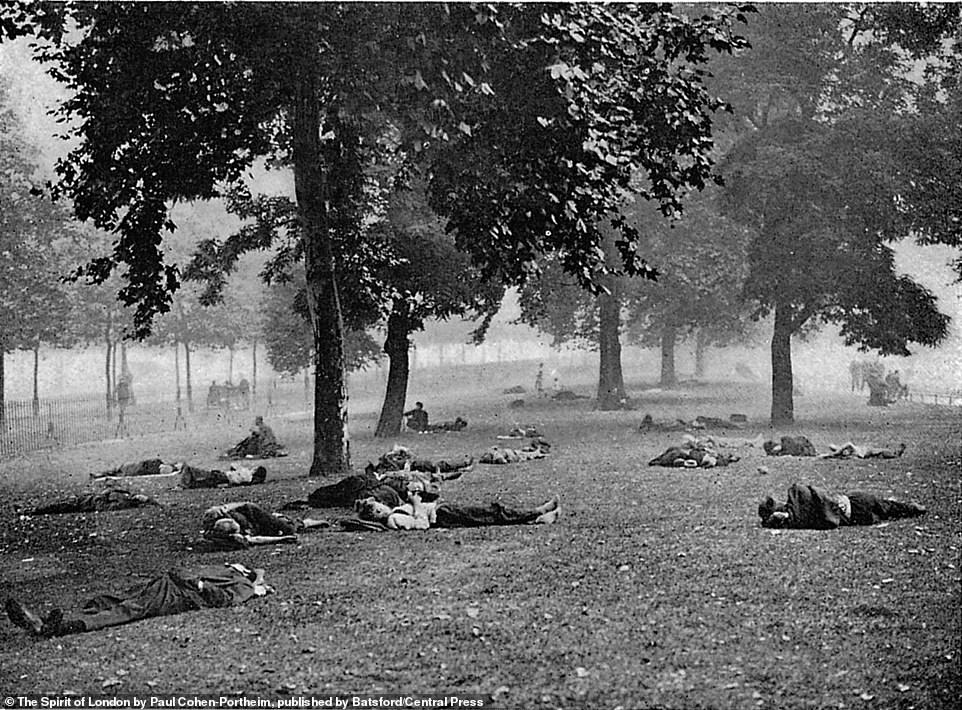 ‘The park is for all classes,’ writes Cohen-Portheim, ‘but nothing is more remarkable and charming to observe than the manner in which they respect each other’s codes. There is nothing to prevent the most ragged from lying on the grass where the chairs of fashion stand.’ This picture was taken in Hyde Park and shows ‘the unemployed’ at rest 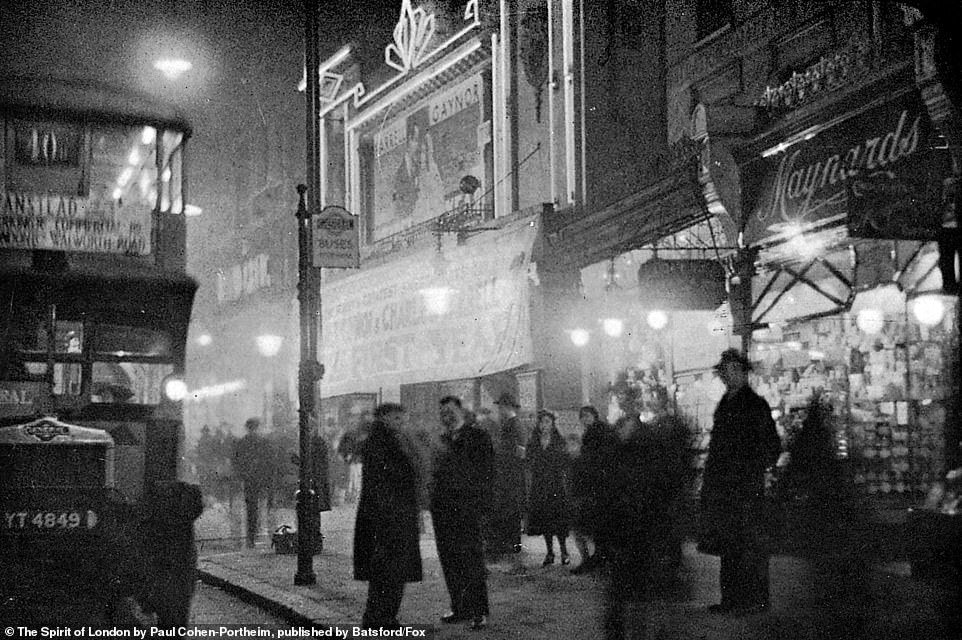 This image shows Camberwell, in South London. Cohen-Portheim writes: ‘London is a mosaic of little cities each with its High Street, and the majority of their populations do not travel to the centre of all things for their pleasures, still less for their shopping, but are content with their own little centre of life’ 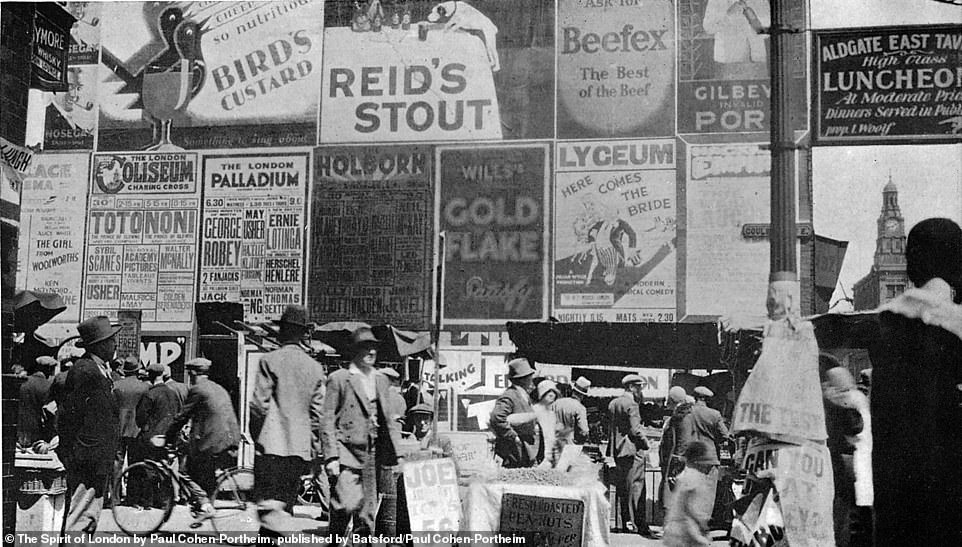 Petticoat Lane market, by Aldgate, photographed by the author. He explains why Sunday was the best day to visit: ‘You will find the Lane not only alive, but teeming, swarming, screeching, and bellowing on its market-day’ 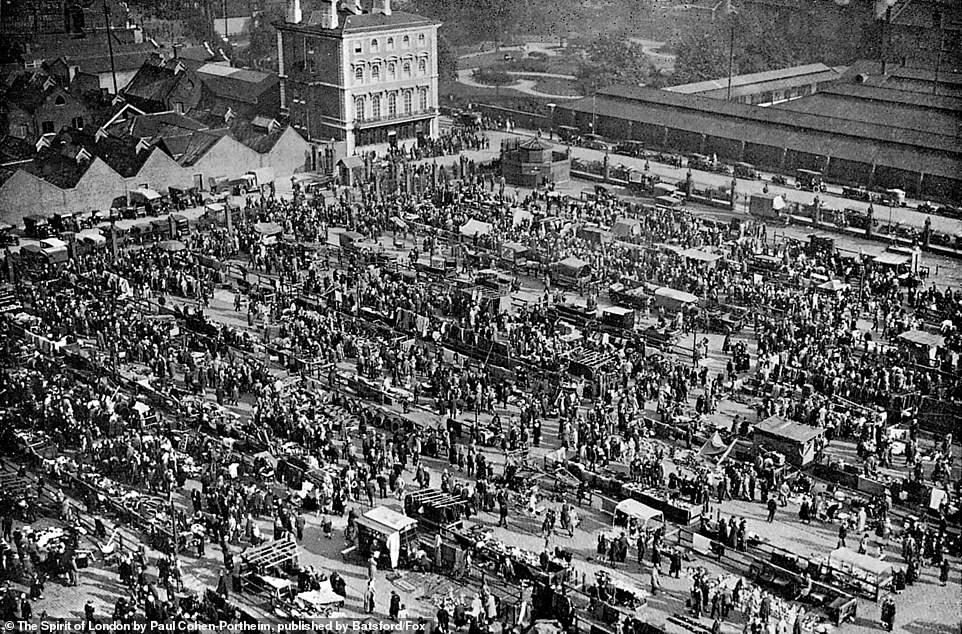 The Caledonian Market, Islington, which Cohen-Portheim says is ‘the most stupendous Foire [fair] in the world’ with ‘acres of every imaginable sort of second-hand objects for sale, from broken plates to costly Chinese porcelain, from discarded stoves to Queen Anne silver, from dirty old mattresses to Chippendale chairs’ 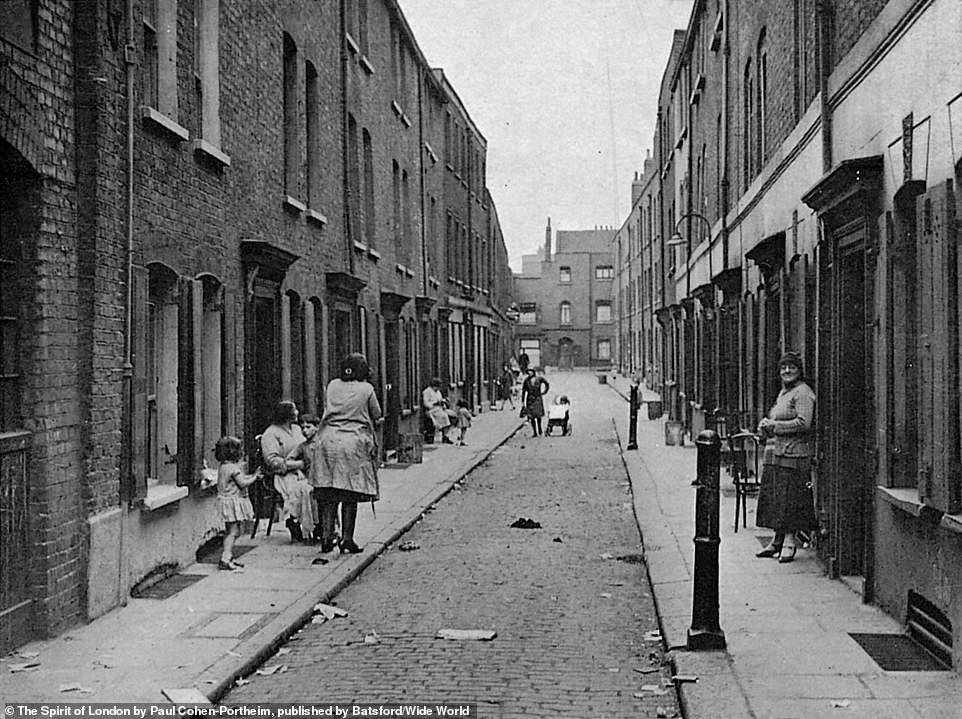 A Street in Whitechapel. Describing scenes like this in the book, Cohen-Portheim writes: ‘It is the only great capital built on the system of the small one-family house; that is why, when you get away from the central parts, you find acres of streets of undistinguished little houses, with only here and there a street of shops and business to interrupt their monotony’ 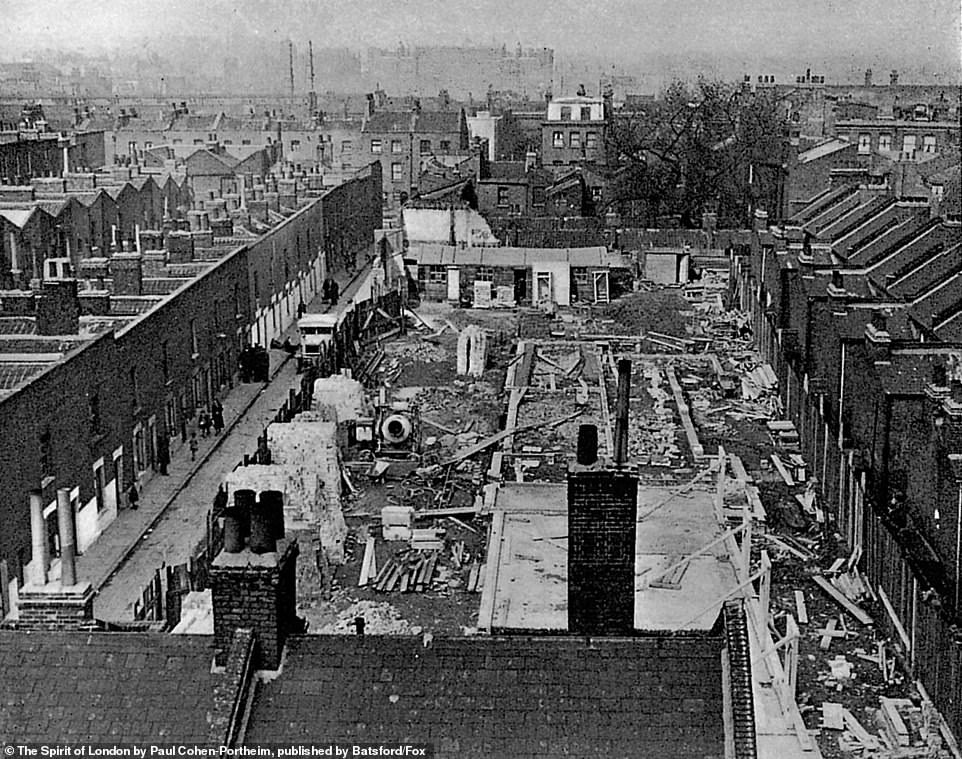 ‘A Parisian would think life in a London suburb hopelessly dull,’ writes Cohen-Portheim. This picture shows houses being demolished in Stepney 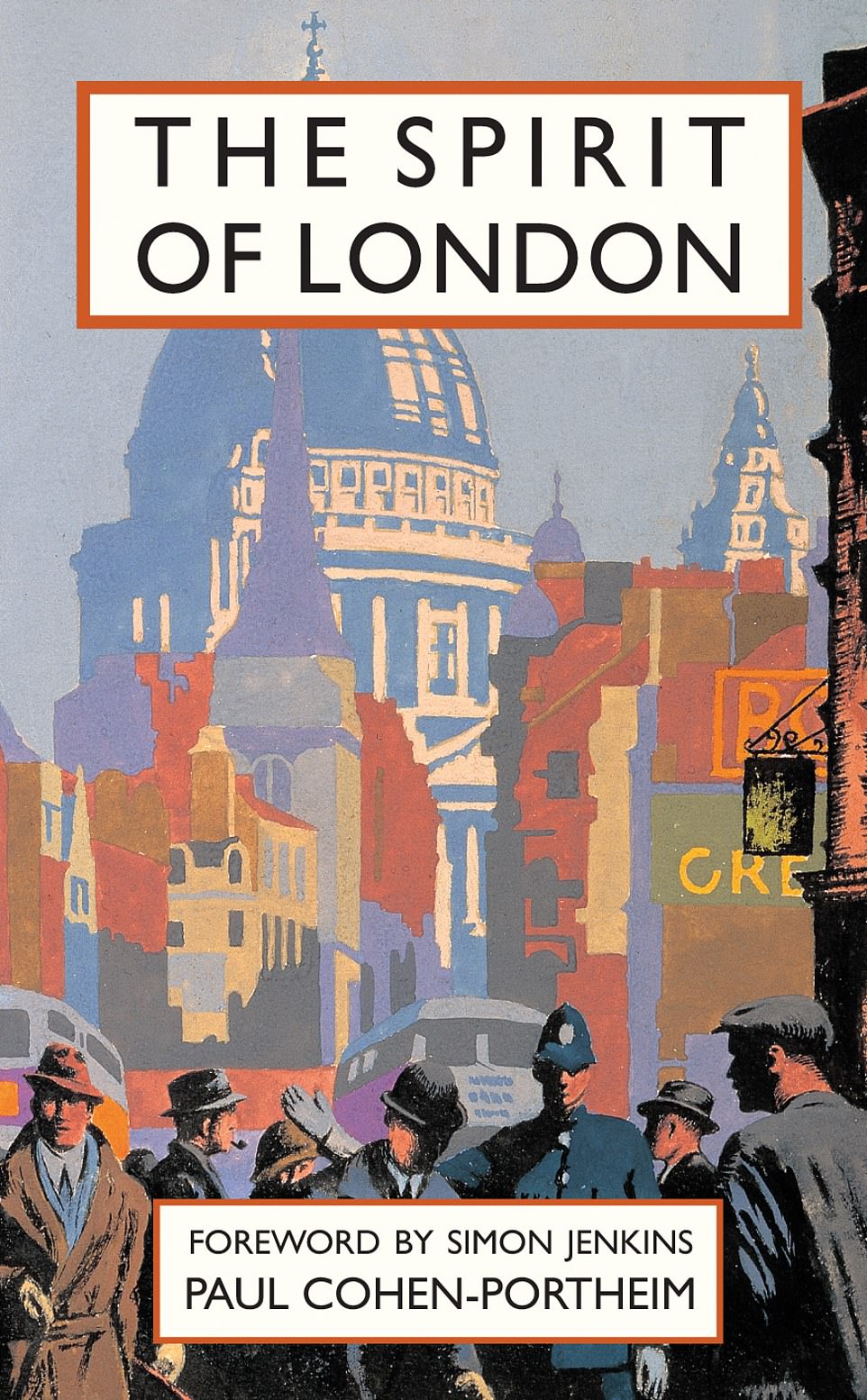 The cover of The Spirit of London features the iconic illustration of Ludgate Circus and St Paul’s by Brian Cook, who produced book jackets for British publishers from 1928 to 1950