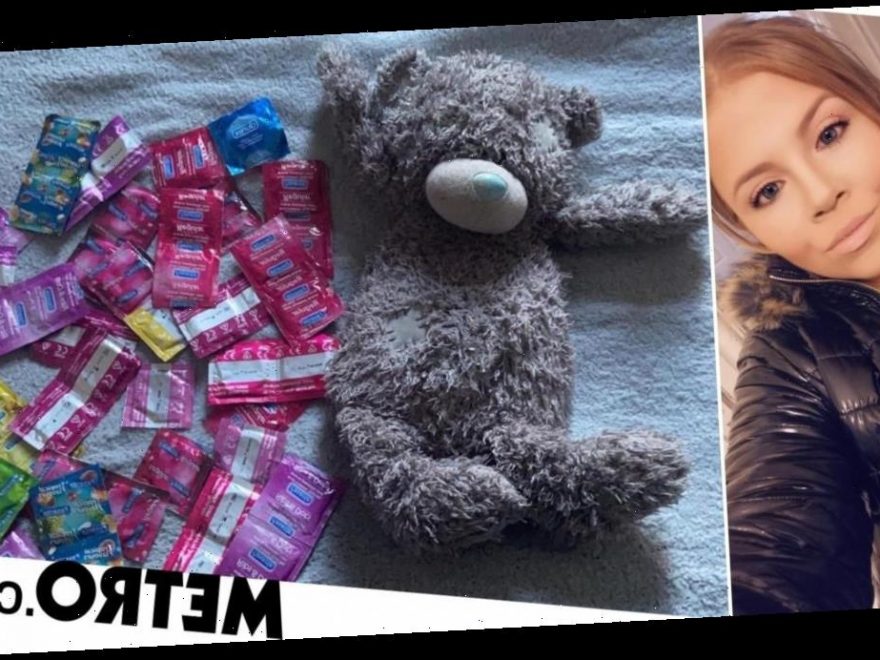 Lucy Lomas lost her virginity when she was 15 but wanting to keep her sex life from her mum, she hid a stash of condoms in a teddy shaped hot water bottle.

The 50 contraceptives stayed there for over ten years as Lucy moved out a few years later and left the hot water bottle behind.

But the sales consultant was left red-faced when her mum was cleaning out the loft and uncovered her hiding place.

Lucy, 25, from Blackpool, couldn’t help but laugh at the messages from her mum and decided to share it with others to give them a giggle too.

With a photo of the condoms and the hot water bottle she said: ‘Just thought I’d share this because I think its hilarious.

She also posted screenshots of the messages she’d got from her mum.

Luckily, they both had a good laugh about it.

Lucy said: ‘I have always been very open with my mum so I knew she would’ve found the funny side.

‘But I had forgotten they were ever there so I was probably just as surprised as my mum.’

Lucy admits she had forgotten about her stash until her mum found it.

Lucy added: ‘I collected them all from visiting the Buzz Bus and they’d give us bags of them each time, obviously I never needed so many.

‘At least I was being safe.

‘Although she did say she’d have preferred to have found empty packets, at least she’d have known they were being used.

‘I think she was just happy I was being cautious and prepared. Luckily, she’s very understanding.’

Get in touch at [email protected]