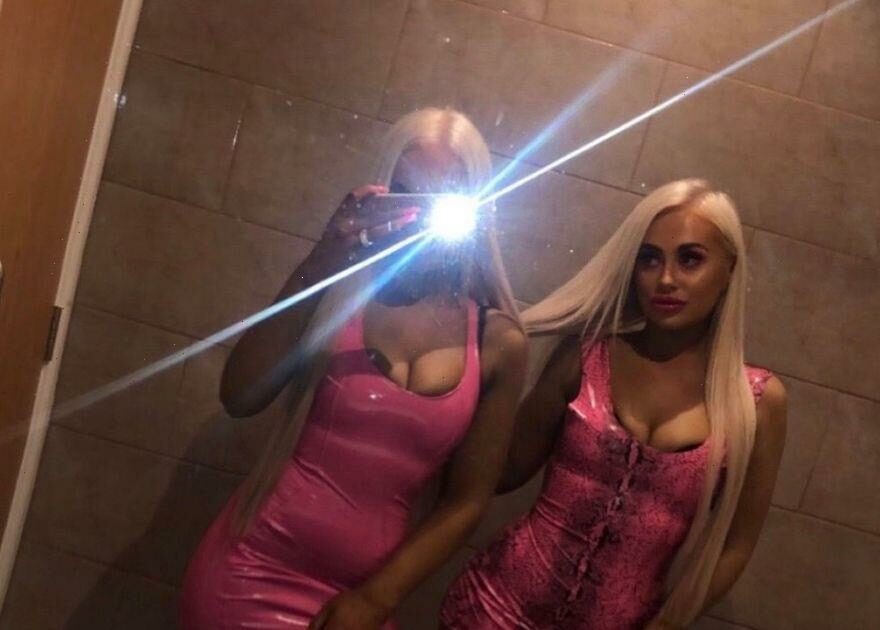 Twins who were bullied at school have spent £140k on plastic surgery – including getting a boob job on the same day – to transform their appearance.

Surgery addicts Dolly and Daisy, 25, want to look as identical as possible and they now rake in more than £10,000 per month on OnlyFans.

The real life Barbies, from Stockon-on-Tees, lost their jobs in lockdown, resulting in them making life-changing money without leaving home.

They now go by the online persona ‘Double D's’ – Dolly and Daisy.

But Dolly was gobsmacked when a former teacher recently got in touch on the online subscription site.

In an exclusive interview with the Daily Star, she said: “He subscribed to my OnlyFans and said ‘oh you’ve grown up to be such a beautiful young woman’.

“It was really creepy because he knew me as a child.

“I did talk to him and try to get money out of him but then I just ignored him because it was really weird.

“I told my mum and she said he should be in jail.”

The sisters turned to surgery after enduring cruel taunts throughout their childhoods.

It began with lip fillers at 18 but progressed to having a nose job and a boob job together during the pandemic.

Dolly explained: “We were both born with white hair.

“People thought we were albinos and they called us grandma. We had white hair, eyebrows and eyelashes.

“We have been bullied all our lives but the big surgeries have fixed those insecurities.”

Dolly “hated” the way she looked and described being an overweight and unhappy teenage girl.

She said she was even too embarrassed to have her arms and ankles on show.

And she joked: “It’s ironic that I now show my body for a living.”

The pair embraced health and fitness and became dancers after finishing school.

But after Covid-19 shut down the country, the sisters were left jobless.

Daisy said: “We both felt really negative and thought ‘what are we going to do?’

“So we started putting real effort into OnlyFans and it changed our lives.

“I know people have had horrible times during Covid but it has been positive for us because everything has changed.

“We made enough money for the surgeries in the UK and now we don’t ever want to work for anyone again and we have the financial freedom to go anywhere we want.”

And her sister added: "Covid showed us we don't even have to go outside to make money. You don't realise the potential of what you can make until you're forced to put your energy into one thing."

But despite already splashing out 70k each on surgeries – they are still not fully satisfied.

Dolly is booked in for a Brazilian bum lift in January and Daisy is also considering it – but doesn't want to get it done in Turkey like her sister.

“I would never stop plastic surgery because it’s preventive of ageing,” Dolly said.

“It does get addictive because you can completely transform yourself and you think ‘if I like the results of me doing this maybe I will like myself even more if I do that’."

She continued: “I get really excited for surgery day now and I even like the recovery and waking up thinking ‘wow I’ve done it’.

“I see plastic surgery and cosmetic procedures as health care – you are worth spending that money on yourself because your happiness is the most important thing.”

But Dolly insisted that surgery was not a quick fix and a whole lifestyle change was required to look and feel better.

She said her and her sister now go to the gym every day and have personal training sessions three times per week.

They are also on strict vegan diets.

She also explained that they wanted to look as identical as possible because it bonds them even closer and they have the same beauty standards.

But Dolly said the pair have received abuse online for being “plastic”.

She added: “The majority of the time I don’t care but some days you can get upset.

“I would say because of the experiences we had when we were younger, it made us have thick skins.

“You can’t take things like that personally, especially from strangers over the internet.”

The sisters live together and help each other with OnlyFans content – describing it as a full-time job.

And despite their rising bank balances, they said surgeries and cosmetic procedures were their only extravagant purchases.

Dolly added: “I’m not really a materialistic person and my sister and I just like holidays and we care more about experiences.

"Our mum is supportive of us too and she knows we are safe and not doing anything in real life.

“She knows we are now happy and we can have an amazing lifestyle.

“The only difference with spending is that before I would pay maybe £200 at the aesthetic clinic but now I could spend thousands.”