A tiny Leonardo da Vinci sketch sold Thursday at Christie’s for 8.9 million pounds with fees, or about $16.5 million, a record price for a Leonardo drawing at auction.

Leonardo’s delicate silverpoint study Head of a Bear, measuring just under 3 inches by 3 inches (about 7.5 centimetres), and thought to date from the early 1480s, was included in Christie’s summer “Exceptional Sale” of high-value historical works of art assembled from a range of collecting categories.

Estimated to sell for 8 million pounds to 12 million pounds, or about $14.9 million to $22.3 million, the drawing was bought by a single bid from an as-yet-unidentified buyer in the auction room. There was no competition from any telephone or internet bidders. The final price of $16.5 million was marginally better than the $15.5 million given in 2001 for Leonardo’s slightly larger silverpoint study Horse and Rider, the previous auction high for a drawing by the artist. 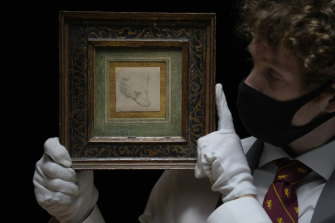 Leonardo da Vinci’s Head of a Bear: “You’re buying a name. It’s nothing to do with the love of drawings,” said Jean-Luc Baroni, a dealer in museum-quality old master drawings.Credit:AP

“These prices are absurd,” said Jean-Luc Baroni, a dealer in museum-quality old master drawings, based in London and Paris. Baroni said that if he had been asked to price the work, he would have valued it at about $2.7 million. “You’re buying a name. It’s nothing to do with the love of drawings.”

The drawing might have been small — it is about the size of a standard square Post-it note — but the sale was viewed by many experts as possibly the last opportunity to buy an original Leonardo drawing from a private collection. 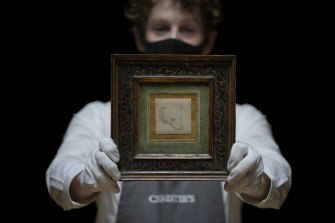 A Christie’s staff member with Leonardo da Vinci’s Head of a Bear.Credit:AP

“Leonardo is the magic name,” said Anthony Crichton-Stuart, director of the London dealership Agnews, who had been following Sotheby’s day sale.

Leonardo was known to create “composite” animals in his art by combining elements from different species. Scholars have associated the drawing of a bear that sold Thursday with the famously animated head of an ermine in Leonardo’s celebrated Portrait of Cecilia Gallerani, dating from about 1490, in the National Museum in Krakow, Poland.

“It was a very beautiful, very poetic drawing,” said Stephen Ongpin, a specialist dealer in old master drawings, based in London. “What I liked was the tenderness of the depiction. It’s not like a scientific drawing. But it was small.” Ongpin said that he thought Christie’s valuation had been “correct,” given that the estimate reflected a record price for a Leonardo drawing set 20 years ago.

Ongpin and other dealers identified Christie’s anonymous seller as American billionaire Thomas S. Kaplan, best known for his touring collection of paintings by Rembrandt. Kaplan acquired the drawing from London dealer Johnny van Haeften in 2008, as indicated in Christie’s cataloging. Kaplan declined to confirm that his was the “family trust” making the sale.

Ongpin said that Christie’s had been looking for the “Salvator Mundi effect” by offering the drawing in its evening “Exceptional Sale,” which appeals to wealthy collectors of trophy objects, rather than at a specialist old masters auction.

“There are one or two private collectors and one or two museums who could have bought a drawing like this,” Ongpin said. “But Christie’s were also looking for a buyer who doesn’t collect drawings and would be entranced by the name.”

The sale raised questions about the future of another drawing by the Renaissance master, that one owned by a retired doctor in France.

The former doctor, an octogenarian known in legal documents simply as Jean B., is hoping to add the work to the small list of Leonardo drawings from private collections offered on the open market.

Back in 2016, Paris auctioneers Tajan identified a double-sided pen-and-ink drawing that the doctor owned as a major Leonardo discovery. Widely accepted as a Leonardo by specialist scholars, the drawing, showing the martyrdom of St. Sebastian on one side and scientific sketches on the other, was declared a “national treasure” by the French state, which was permitted to offer to buy it at a fair market price during a 30-month period during which its export was banned.

But the sensational Salvator Mundi sale in 2017 made the owner of the drawing revise his expectations, according to Rodica Seward, owner of Tajan.

Seward said that the owner decided to cancel the auction planned for June 2019, at which Tajan hoped to achieve a price of at least 30 million euros, or about $47.9 million, for the double-sided drawing. That July, the French state offered to buy the sheet for 10 million euros, or about $16 million, just before the certificate refusing its export was set to expire. The offer was rejected, and the export ban remains in place after having been renewed.

The drawing has now become the subject of a protracted legal dispute, in which the owner and his family are seeking to lift the export restriction, which would allow them to sell the Leonardo on the international market. On Wednesday, a Paris court adjourned the case until October 27.

“If that little Christie’s drawing is worth $12.2 million (AU$16.5 million), what is the St. Sebastian worth?” Seward said in an interview. “Who can buy it in France if you can’t export it? Who knows?” she added. “The drawing is in limbo, and is in our safe.”