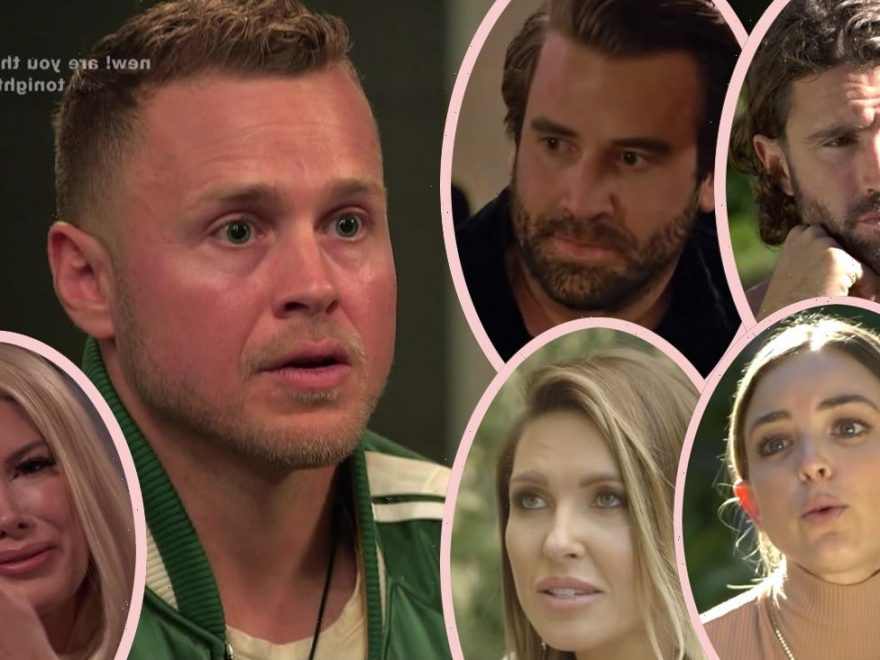 Now we’re starting to understand why Spencer Pratt said before this season of The Hills: New Beginnings that we shouldn’t expect a Season 3 with the same cast! They’d probably kill each other!

On Wednesday night’s episode, the cast went to a murder mystery dinner party, and what got killed was THE VIBE! Basically, the growing feud caused by the questioning of Jason Wahler‘s sobriety came to a head, with Ashley Wahler exploding at Spencer.

Then it was World War III, with Kaitlynn Carter taking the Wahlers’ side, and of course Heidi Montag being in her man’s corner. Total bedlam.

But it was the aftermath out in the real world that has us on the edge of our seat this time.

As the show was airing, a fan reached out to Spencer on Twitter to ask:

“SOO, I have to know if the cast has reached out to Heidi and Spencer to apologize for how they treated them this season?”

“Audrina is not only boring but also such a liar. Kaitlynn, not made for reality TV. Sleeping symbol JB bad boy thing is played out. Done.”

The MTV star actually responded, and it got even worse! He stated straight up:

“No, they’re the worst people ever.”

Daaaaaaamn! The fan wasn’t done, though, and neither was Spencer! First she went off, saying:

“The jealousy is so overwhelming clear. They ALL knew you two were going to be the stars (ya know, cuz you have personalities & Gunner) plus you and H have gained a following over the years so in my opinion they wanted to push you guys out. LOVED the healing session scene. TVGOLD”

To which the 37-year-old responded:

He went on to RT several other fans who agreed Speidi were the real stars — and needed their own spinoff! And when one fan wrote:

“I feel like @heidimontag and @spencerpratt were setup on tonight’s episode. Omg. This is such bulls**t.”

And when another fan wrote:

“the rest of the cast are pathetic. it’s so hard to get on a show and they are taking it for granted. If they didn’t want to keep it real and entertaining they should’ve not signed up or taken supporting roles so producers could bring in ppl who actually want to work”

Spencer took it a step further by calling out one producer in particular, writing:

“Yah this one producer Meg just enabled this garbage.”

And he wasn’t done. On Thursday’s episode of Juicy Scoop with Heather MacDonald, Spencer got even more real, talking about how setting up Audrina Patridge on a date was, in reality, him just trying to give her a storyline since she refused to put any of her REAL drama onscreen!

And he got even more savage, saying:

“It’s the worst cast. Here’s what happened, I’ll give you the breakdown. Everyone was hoping when The Hills came back, that hated Speidi, which is what they had before, and then they saw last season. We had so much positivity, we had so much success, they saw what our crystal business was doing, making millions, everyone was so mad, like, No, Speidi’s supposed to be hated. So they — and this one producer, Meg — plotted.”

He even told the Chelsea Lately vet she could check with Brody Jenner, that he’d corroborate they were being “set up.”

“It was a takedown.”

He then expresses the problem with the whole season, as far as he’s concerned:

“Nobody wanted to show what’s really happening in their lives — also because it’s so boring — they’re like, ‘Let’s look at Heidi and Spencer, they’re getting drunk… even though we’re all getting drunk.’… And it happens through the whole season.”

Wow. You can watch that whole uncensored talk (below)!

Do YOU agree The Hills has gotten boring? Do you buy Spencer’s take, that it’s all a semi-scripted setup, just like the original show?? Let us know in the comments (below)!