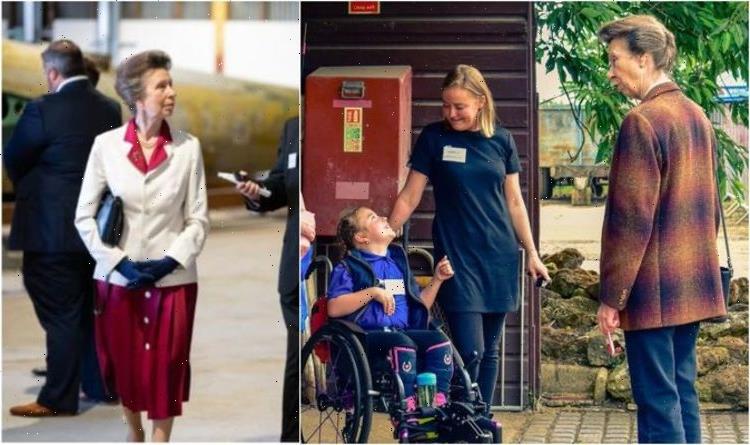 On Monday 12th July, the Princess Royal opened the Magpie Centre Sensory Garden, where there is a horse riding centre in West Norfolk for the Disabled Association.

This garden will be for people living with dementia or sensory impairment.

The West Norfolk Riding for the Disabled Association (WNRDA) chairman Colin Perriss said, “We are extremely grateful to Her Royal Highness for taking the time to visit us, to learn more about what we do and how the support of so many people and businesses from the local community helped us through the difficult periods of lockdown.”

For this event, the Princess Royal wore a brown, textured blazer with royal blue trousers, a white blouse, and black sturdy shoes.

The following day, on Tuesday 13th July she attended a memorial service at Norwich Cathedral Close in dedication to the 97 soldiers who lost their lives in a massacre at Le Paradis, France in 1940.

For this solemn event, Princess Anne wore a baby blue dress with a royal blue hat and black pump heels.

She completed the outfit with a matching black handbag and black gloves.
On Wednesday 14th July, the Princess Royal was in Plymouth to officially reopen the museum The Box.

A spokesperson for the museum commented, “We were thrilled to receive a visit by Her Royal Highness The Princess Royal today.

“She viewed some of our award-winning exhibitions and displays and met some of the many people who have supported or been involved in their creation.”

For this occasion, the Princess Royal wore a simple suit consisting of a white blouse, black trousers, and a blue blazer.

The outfit was completed by her black handbag as well as a black mask whilst touring the inside of the museum.

The following day on Thursday, Princess Anne was in Bristol visiting Bristol Aerospace to open their new Conservation-in-Action Workshop.

She wore a fuchsia pink dress accompanied by a white blazer, and her signature handbag and gloves.

The Princess Royal ended her working week on Friday 16th July by attending the 149th Open Championships at The Royal St George’s Golf Club in Kent.

For this event, Princess Anne wore another blue blazer similar to the one she had worn to The Box museum in Plymouth, but styled it this time with white trousers, a blue and white checked shirt, comfortable looking trainers, a baseball cap, and sunglasses.

One Twitter user wrote, “Wow so many engagements this week! She always represents the Crown beautifully wherever she goes.”

Another replied, “She’s the workhorse in the family. Sets a pace that few can keep up with.

“Has represented her mother loyally and flawlessly for her entire life.”

The Princess Royal spent the week travelling up and down the country performing royal duties, and this work ethic is what has solidified Anne’s reputation as dutiful and hardworking.

“Hardest working royal,” one social media user wrote. “Super down to earth and never complaining. She knows what duty means!”

A royal fan added, “Thank you to The Princess Royal for highlighting these wonderful causes and representing Her Majesty The Queen so well once again.”

The Royal Family Twitter page posted a Twitter thread of pictures from all of Princess Anne’s royal engagements this week.