It’s supposed to be a place of quiet. But Marrickville Library played backdrop to tooting car horns, dozens of selfies and several rounds of applause on Sunday morning as Anthony Albanese made his first appearance in his inner west Sydney electorate since winning the election.

Children stood on tip toes to get a glimpse of the action, the elderly hovered enthusiastically around the media pack, and teenagers and their grandparents snapped photos with the member for Grayndler who had brought his dog Toto – Labor scarf around his neck – for a coffee in the outdoor plaza to celebrate with a selection of friends and colleagues. 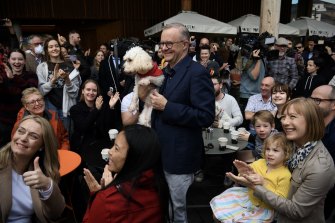 The newly minted Australian Labor Prime Minister Anthony Albanese on a meet and greet in Marrickville on Sunday.Credit:Dean Sewell

Cars beeped their horns as they drove past and there were cheers of “we love you Albo” from across the road while the Labor leader beamed and shook hands with eager locals proud to have elected their seat’s first prime minister.

“He’s not just the next PM, but he’s going to be the best PM,” said 76-year-old Richard Gonsalves, who has lived in Marrickville for 19 years and yelled out his congratulations to Albanese. “It’s too good, he is beautiful, he is so human.”

His wife Rose said the same: “He speaks from his heart, he’s approachable and he means what he says.”

Several in the crowd said they had been moved by Albanese’s acceptance speech on Saturday night, in which he reflected on growing up in public housing as the son of a single mother on disability payments.

One 55-year-old man, who walked past with his elderly Greek father, said he related to Albanese’s story: his family had lived in Marrickville for years and his mother also grew up in Camperdown.

“You make us so proud, this is the greatest thing that’s happened to Australian politics,” the man told Albanese after securing his attention for a few moments. “It’s a big honour.”

Filipino couple Amy and Manny Diel, both 73, live in Brighton but were treated to a surprise when they saw the commotion around Albanese after they walked out of St Brigid’s Catholic church across the road.

They snuck in to get a photo with the new prime minister.

“We were so happy for him, I was inspired by his speech. It was beautiful, came from his heart,” Amy said.

Her husband Manny said Albanese had shown “the sky is the limit”. “I like his story – being born with a single mum, lives in housing commission… He loves the underprivileged, the poor… It’s a beautiful story, a life story.” 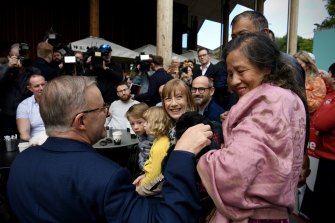 Filippino couple Amy and Manny Diel, both 73, said Albanese had inspired them and shown the “sky is the limit”.Credit:Dean Sewell

It also resonated with 85-year-old Elijah Midzar, from the former Yugoslavia, who joined the crowd and said he had always liked Albanese. “He must be a good prime minister, because he is born with a poor family, that’s what I think,” he said.

As Albanese walked back to his car trailed by Labor supporters and a few more onlookers, he told reporters that his victory on Saturday night had been a “big moment in my life”.

“But what I want it to be is a big moment for the country. I do want to change the country and change the way that politics operates in this country,” he said.

By Sunday afternoon the Henson Park Hotel in Marrickville was abuzz with young families enlivened by Labor’s win.

Albanese is a regular at the neighbourhood pub, and licensee Nathan Somer said the new prime minister was a great supporter of local businesses in the area.

“Because we are such a tight-knit community in the inner west, people are really passionate [about his win] and it’s evident,” he said.

The pub started playing the election coverage last night when Scott Morrison gave his resignation speech. Patrons were booing and singing goodbye, but that turned into chants and fist pumping when Albanese gave his speech.

Somer said it was just like a sports match. “The mood is great – one of our staff members is a volunteer and he is probably the happiest man in Marrickville today. It’s a really happy vibe, a buzz today talking about Albo, which is also great for us,” he said.

“I think it’s crazy – he didn’t really have much when he was growing up, and Marrickville has really changed from a low socioeconomic area to where all young couples and families are moving in. But he’s ready to lead the country and ready to make a change which is great.”