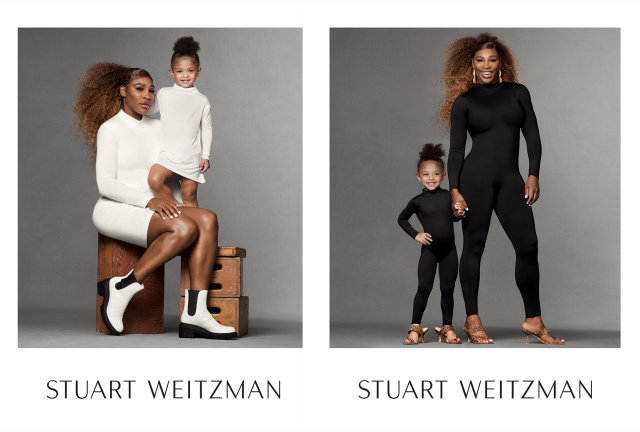 Serena Williams is giving fans some behind-the-scenes details about her viral campaign for Stuart Weitzman. The photos, in which the tennis champion costarred with her three-year-old daughter Alexis “Olympia” Ohanian Jr., became a sensation when they were released earlier this month.

“It was so fun, it’s something I’ll be able to show [Olympia] in 20 years and you can’t beat that. I’m not ashamed to say it’s the best thing I’ve ever done,” Williams said in a new Stuart Weitzman YouTube franchise, the “Shine Series,” in which the company’s chief marketing officer Behnaz Ghahramani interviews inspiring public figures.

Getting a toddler into a performance mode was no easy feat, Williams said, admitting that she was initially nervous that Olympia wouldn’t be up to the task of a photo shoot.

“We were getting nervous — she took her nap [before] and you can’t shoot with kids for that long, so she came and went nuts — just pose, pose, pose — and then she was out. I was like — that’s how you shoot,” said Williams.

The shoot had a mostly kid-friendly soundtrack. “We had the ‘Baby Shark’ [song] playing, she loves her little Disney songs and then she loves the ‘Body’ song [by Megan Thee Stallion] but I put the clean version on,” Williams said.

While Williams says she never intended to become a role model for other women, she realizes the power of her position. The tennis star won the 2017 Australian Open while four months pregnant with her daughter. “When that happens, you are not planning on winning — you just plan on surviving. I kept surviving, I kept surviving and just kept on winning,” she said of the experience.

The conditions in Australia during the tournament were an incredible challenge, leading Williams to ultimately choose a name for her daughter that was based on the concept of strength.

“When I was pregnant I remember looking at my husband and saying, ‘OK, this is definitely a girl because no boy would be able to handle what I’m putting this kid through.’ Playing in the heat like that, I knew it was a girl. I wanted her to have a name that helped her when she was facing times of toughness.

“So I thought, ‘What is a name that means strong?’ I looked up synonyms, I wanted her to know that her name was strength and Olympia just stuck. We can’t live in this world and be weak. If you are a woman or a woman of color you need to be strong and stand up. You can’t allow anything to run you over. I feel like someone like me tends to have to be stronger than I would have ever thought,” Williams said.

That strength extended to recent weeks, when Williams issued a statement in support of her friend Meghan Markle following her sit-down interview with Oprah Winfrey. Williams was a guest at Markle’s wedding to Prince Harry and Markle is known to attend key tennis matches of Williams’.

“Meghan is a great person. I think the epitome of strength, the epitome of confidence and epitome of selflessness is just her and everything she’s gone through,” Williams said. “It’s not easy — you can see from the interview it’s not easy and she still had so much poise and so much class. I think she is the strongest person I know. I don’t know anyone who could handle things on such a global scale, minute-after-minute having another untrue allegation thrown at her. I felt like it was important to say something, I was tired of sitting back and seeing all this negativity that’s just not true.”