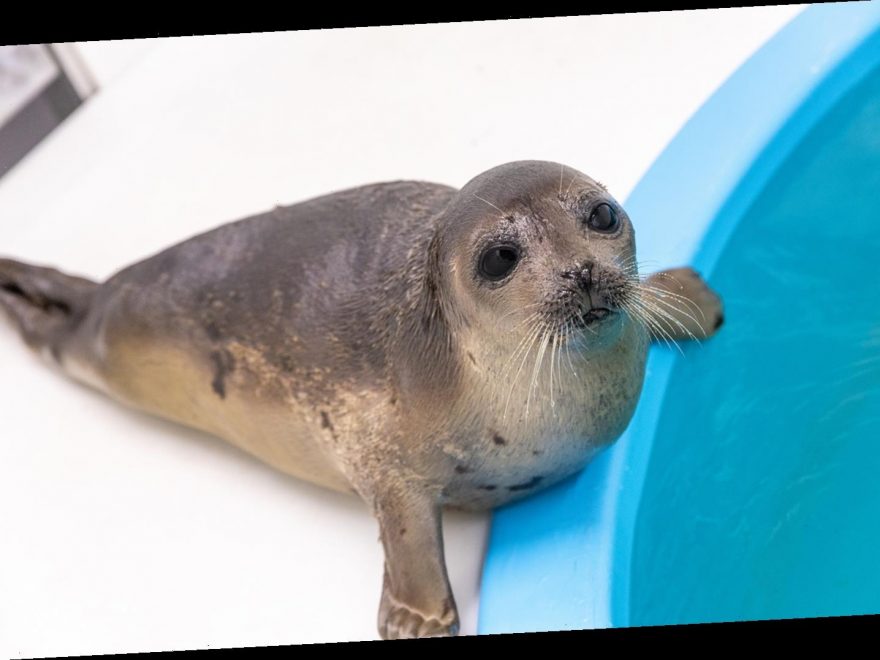 The juvenile seal was rescued from Ocean City, Maryland, on March 2 and is currently being cared for at the aquarium's Marine Education Research and Rehabilitation Institute (MERR).

Before Stuart arrived at the aquarium, his rescuers observed the seal eating sand on the beach. In addition to being a sign of stress and dehydration, eating sand and rocks can potentially cause major damage to a seal's digestive system.

"Harp seals typically eat ice for hydration during periods when they don't have access to food," Director of National Aquarium Animal Rescue Jennifer Dittmar said in a press release. "When they move south into areas where there isn't ice, they maintain this behavior and can eat whatever is around them — often sand and rocks. This behavior can also be a stress response." To help flush the sand from his body, Stuart Little received water immediately upon arriving at the aquarium.

Although additional testing did not show that the 48 lb. seal had rocks in his belly, his recovery process will include "treatment for internal parasites."

"He now has full-time pool access and has started eating about ten pounds of fish a day," the aquarium shared in their release about Stuart Little's rescue. Last month, the aquarium took in a 1-month-old rescue seal named Eloise, who arrived at the center malnourished and with several lacerations on her neck.

To help the seal pup gain strength, the aquarium initially hydrated and nourished her through an oral feeding tube. The seal pup (pictured above), who the aquarium found alone, quickly picked up eating fish, which is a good sign for her future. The National Aquarium cared for their first maternally-dependent seal pup last year. The pup, named Pippi Longstocking, was successfully rehabilitated and released after nine months at the Baltimore aquarium.

"She is very active and loves enrichment activities that mimic foraging. She now weighs 35 pounds and is eating more than eight pounds of food per day," according to the aquarium, which is hopeful Eloise will eventually be released back into the ocean.