One Nation will demand casual staff get a choice to become permanent sooner among changes it wants to the Morrison government’s industrial relations bill in exchange for its support.

The government needs three of the five crossbench votes to pass its IR overhaul, two of which are controlled by One Nation senators Malcolm Roberts and Pauline Hanson. 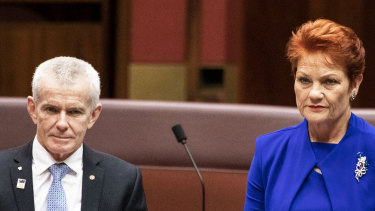 Under the government’s proposal, casuals who have worked regular hours for six months but been employed for at least a year must be offered the chance to become permanent part-time or full-time staff. One Nation wants the one-year threshold cut to six months.

“Employees need to feel empowered to explore work arrangements that better suit their changing needs and when it suits their lifestyle, for example, when looking for a loan,” One Nation Senator Malcolm Roberts said.

“Six months is long enough for an employer to get to know their employees, so it is reasonable that an employer will be in a good position to have that discussion.”

Casual workers get paid more than their permanent colleagues but do not receive sick leave or paid holidays and can be let go at almost any time. Mine workers on casual contracts have complained that they cannot get a loan because banks regard their employment as uncertain.

One Nation is expected to reveal about a dozen amendments to the government’s bill late on Monday afternoon. It has already said it wants a review of the new laws one year after they are passed and a root-and-branch review of industrial laws after two years.

“I think there would be some merit in that, I think it’d be dependant on industry and the amount of hours that employee is working and the consistency of hours, but I think that would be a reasonable proposition,” Senator Griff said.

Like One Nation, Senator Griff said Centre Alliance was working on a package of amendments to parts of the bill it wanted changed.

“We’ll get to a point where we’ll declare what we support with amendments versus what we won’t support at all in the next couple of days,” Senator Griff said.

The Australian Council of Trade Unions has criticised the casual conversion right as unenforceable because employees who are not offered the chance to become permanent cannot get cheap and quick mandatory arbitration, but must go to the courts. The government rejects that claim, saying it is how other industrial laws are enforced.

Acting Industrial Relations Minister Michaelia Cash has met informally with Centre Alliance and will have a longer meeting in the coming days.

“In keeping with the collaborative approach adopted by the government since the pandemic began, we continue to engage constructively with crossbench Senators and remain willing to consider any sensible amendments that will increase the bill’s chances of being passed by the Parliament this week,” the minister’s spokesman said.