At lunchtime on Thursday last week the weather forecast for Sydney’s inner west predicted a 40 per cent chance of up to 1.4 mm rain. Outside at the time, the heavens opened with a downpour so powerful it was hard to see your hand in front of your face.

The La Nina system has not just filled waterways and sodden the earth with 157 millimetres of rain in the first 20 days of January – smashing the mean rainfall for the month by more than 55 millimetres – but also added a frustrating layer of complexity to weather forecasting. 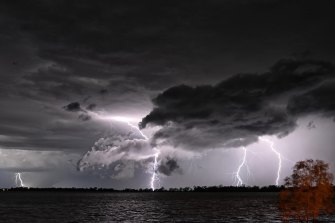 NSW has been battered by storms this summer, with La Nina one of the main climate drivers.Credit:Nick Moir

CSIRO Climate Science Centre director Jaci Brown said people tend to remember when the weather forecast is wrong – not the majority of times it is right.

“There is a mismatch between what a forecast can tell you and what you want to hear,” she said. “A forecast may say there’s a 50 per cent chance of showers but want you want to hear is, ‘Should I take an umbrella or not?’.

Bureau of Meteorology senior meteorologist Jackson Browne said colleagues can generally predict the forecast three to four days ahead with confidence, but anything further ahead gets trickier.

“We deal with a lot of variables,” Mr Browne said. “That only gets worse with time. People talk about the chaos theory: if a butterfly flaps its wings in South America, there’s a typhoon in Japan. Small things that we’d [otherwise] consider insignificant errors in the models and environment limit the predictability.

“I think people take the computer models as gospel, but they are an educated guess based on mathematical and physical equations.”

The key driver for this year’s wet summer has been the La Nina event which has caused warmer than average water temperatures off the east coast of Australia, creating extra energy and moisture – both key ingredients for storms. The La Nina effect is expected to peak soon.

The BOM classifies a storm’s severity based on the amount of wind rotating the storm in a certain direction: more rotation means the storm will be more organised and severe. Typically, storms in the south-east of Queensland and north-east of NSW are more organised, while those in Tasmania or near Darwin tend to collapse fairly quickly.

“The peak of storm season is around October to December … as we go into deeper parts of summer, generally in a La Nina year, we step away from thunderstorms and start talking about low-pressure systems which typically bring flooding rains,” Mr Browne said.

Last year was the wettest year on record since 2016, while November 2021 was the wettest November on record. Last year, two powerful weather systems converged to dump torrential rain for a week in mid-March in NSW, with water flowing into already swollen waterways.

While it’s too early to say for certain whether there’ll be another major flooding event like 2021, Mr Browne said it was a possibility. Parts of NSW have already experienced heavy flooding, most recently feeling the effects of two ex-tropical cyclones with some parts of the state recording about 700 millimetres of rain. 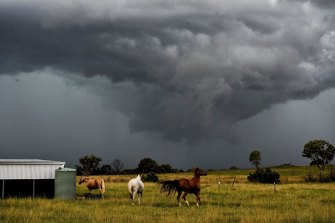 Horses become nervous from thunder as a rotating wall cloud develops behind them near Wellington earlier this week.Credit:Nick Moir

Since late 2021, the NSW State Emergency Service has been preparing for another busy storm season.

“The Bureau of Meteorology advised we were potentially looking at a similar season to last year’s, if not a more intense one,” NSW SES commissioner Carlene York said.

“When you add that on top of that the fact our catchments were already saturated from previous heavy rainfall, there was a higher chance we were going to experience riverine and flash flooding NSW.”

Since October 1, 2021, the NSW SES has responded to more than 18,000 requests for assistance – the vast majority of which have been storm-related. Commissioner York warned the storm season was far from over.

“It is important to remember that storms are not just isolated to this period of the year. They can happen at any time, and sometimes with very little warning, despite what the forecasts might be,” she said. “That is why we need everyone to be prepared.” 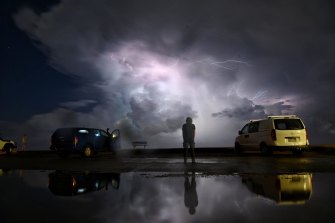 The Sydney Morning Herald’s chief photographer Nick Moir, who has spent 25 years photographing extreme weather, relies on forecasts to determine where to position himself during bushfires, floods and storms. He uses a range of weather services, including BOM, Weatherzone and Weatherwatch.

“When you are looking for where to go [storm] chasing, you’re looking where the organised storms will develop, where the best ingredients are: the best wind shear and instability and road networks, and you are trying to position yourself there,” he said.

“For floods, you’re looking at a combination of where the rain is falling, which areas are historically flood prone, and for fires you’re looking where the worst wind and heat are, and where the most fuel is.”

“I’ve never seen a [storm] season like this one. Almost every week we’ve seen a storm outbreak in the state,” he said. “It’s the exact opposite of what we saw two-and-a-half years ago. 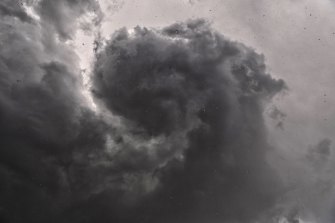 The BOM will determine a storm’s severity based on how organised it is.Credit:Nick Moir

“These are those extremes we have been worried about. It’s hard for ecosystems to deal with extremes. Plants have evolved to survive in drought or wet areas, but when there’s one [extreme] after another it cannot be healthy for an ecosystem.”

Forecasting for the longer-term plays a major role in anticipating what the world could look like in 30 to 50 years in a warming climate, providing information on seasonal variation or how sea levels rises could impact coastal communities.

“Climate projections look further into the future and you have many, many simulations going at once to try and get a range of what might happen,” Dr Brown said. “No one person understands the complete model system, it’s such a cross-disciplinary requirement.

“We now have to use computer simulations to look into the future and come up with new ways dealing with a climate we haven’t seen before.

“The Earth is a complex place.”